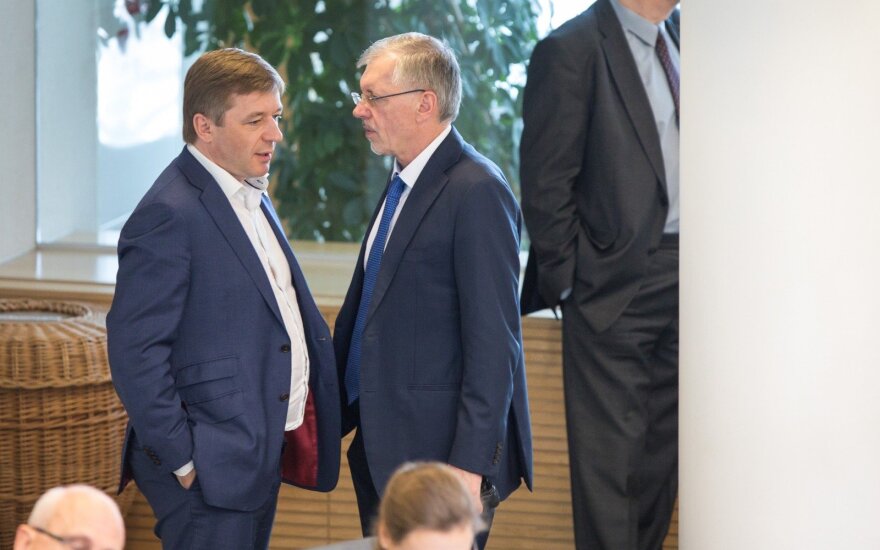 Currently Lithuanian parties are pursuing catchall politics, seeking to appeal to all voters, but voters are not left satisfied with the poorly matching policies, political scientist Vincentas Vobolevičius explained people's disappointment to lrt.lt. Meanwhile, sociologist Vladas Gaidys notes that the parties are devalued by politicians' inability to accomplish their pledges, however this has a clear and understandable reason, lrt.lt writes.

During the LRT Television show Savaitė, Mykolas Romeris University political scientist Rima Urbonaitė, speaking of the planned "Farmer" and Order and Justice Party Seimas group coalition agreement to be signed in autumn, stated that such coalitions devalue the role of parties in politics.

We remind that the "Farmers" earlier declared they would not cooperate with parties, which have come under law enforcement scrutiny. That said, "Farmer" leader Ramūnas Karbauskis assures that a Seimas group coalition is not equal to a coalition of parties.

Not only political scientists are talking about parties weakening, the trend is evident in sociologic research as well. In July, a public opinion and market research centre Vilmorus survey revealed that of all institutions, Lithuanians trust political parties the least. According to the research, around 65% of respondents do not trust parties, while only 8% expressed trust in them.

Social Democrat Labour Party chairman, seventh term MP Gediminas Kirkilas told lrt.lt that he disagrees with R. Urbonaitė's thought that Seimas group coalitions devalue the parties themselves. According to him, Lithuania is not under a two party system and usually government is formed from several parties, thus coalitions are inevitable.

"Such a thought sounds odd to me because how then would things go in Scandinavian states, where after the war, I do not know if there's ever been a coalition? Just look at Sweden, Denmark, Norway – normally they always have coalitions.

The parliamentary fragmentation is decided by the electoral system. Our electoral system is mixed and as recent elections show, 7-8 parties enter Seimas and none has a majority, except the case of 1992. It would appear that the exception of 1992 will not repeat, thus parties will have to make coalitions even if these end up being minority governments," G. Kirkilas said.

The Social Democrat Labour leader, musing on the low confidence in parties in Lithuania, observed that one of the reasons for such a trend is the deterioration of ideological distinction between parties. Furthermore, according to the veteran politician, even to the public itself, political views are losing importance.

"Take the Scandinavian states, where almost all the parties have their own institutions financed by the state, where political scientists work, former politicians, where discussions continue on ideology. This is not present in Lithuania, perhaps there isn't even resources for it," the MP noted.

G. Kirkilas admitted that the devaluing of parties and lack of confidence in them was also increased by failures to accomplish pledges. However, he believes that there is an explanation for this.

"For example, the Social Democrats had to work in a coalition with the Labour Party, which is far more left wing, thus we had to make compromises and compromises prevent accomplishing promises to the fullest extent," the politician explained.

Conservative recommends to look to the past

"What the "Farmers" are doing is just complete political pornography. It is incomprehensible. Supposedly the party is unacceptable, criminal, you cannot talk to it because it is criminal, stands accused, but no – when you need to form a coalition, then they say that they are forming it with Seimas groups and not with what stands accused in court," the conservative MP criticised.

Speaking of current active Lithuanian political parties, K. Masiulis emphasised that parties are currently attached to pragmatism and populism – almost all of them speak about the welfare state and ideological disputes are often left on the sidelines. On the other hand, according to the politician, when questions such as the concept of family are reached in discussions, ideologies end up clashing.

"If we started a radical discussion on values, then our conservative nature surfaces in disputes on the concept of family. I am more liberal in the party, I do not like such discussions, but I can see that my colleagues argue about it determinedly," K. Masiulis pointed out an example.

When asked, why parties are the government institution, which is trusted least in Lithuania, the conservative suggested looking to the country's past. According to K. Masiulis, Lithuanians were always ill disposed toward top authorities, thus in his opinion, this impression is also reflected in attitudes to political parties.

"This is a heritage from deep, centuries long Lithuanian resistance. Did Lithuanians ever trust the rule of the czars after the division of the Lithuanian – Polish Commonwealth, with the Russian empire closing down universities, prohibiting from teaching children, prohibiting books? That government was foreign. How long have we had our own government? Only 20 years – I mean the Smetona era – and this trust in the government was dubious. [...] During the Soviet era, there was also a feeling of alienation between government and people.

Now the mode of governance has changed, we have our own state, but people's perceptions have not – "If I have a company, then the government is seeking to cheat me, steal from me because it is trying to tax me,"" the conservative mused.

Public opinion and market research centre Vilmorus director, sociologist V. Gaidys also concurred that coalitions between parties or Seimas groups, which during campaigning pledged to not cooperate with one another, devalue the role of parties in politics, however at the same time he noted that this should come as no surprise.

"Parties promise a great deal during electoral campaigns. There is no party, which doesn't promise, but after the elections the promises are left unfulfilled because coalitions must be formed. It is rarely the case that a single party has power.

It is rarely the case that parties do not change. They enter coalitions and, let's say that yesterday's enemy becomes today's friend," V. Gaidys explained.

The sociologist emphasised that in essence the research suggests that disappointment in parties chiefly occurs due to unfulfilled promises and changes in party leaders' opinions after campaigning.

"Parties are living people and a complaint to them is usually that they often care for themselves, not for the people," the sociologist stated.

ISM Management and Economics University docent, political scientist V. Vobolevičius stated to lrt.lt that it is not easy to answer, what devalues parties in Lithuania and leads to mistrust in them – whether party actions in seeking coalition partners or historical factors, such as scandals.

According to him, if we agree with the statement that society is most disappointed by unfulfilled pledges, then the "Farmers" risk to lose trust by choosing to cooperate with Order and Justice, which is under suspicions of corruption. Nevertheless, V. Vobolevičius urges to not rush to this conclusion. The political scientist reminds that recently, an important evaluation criterion for parties has emerged in the form of distinction between the elite and the remaining, often called "second", Lithuania.

"In this case, both the "Farmer" and Order and Justice electorates are to a great extent that of the "second Lithuania." In this, it is very important, how the voters will accept this cooperation. If the "Farmers" cooperated with the Conservatives, there would be disappointment on all sides, but when two political powers representing the "second Lithuania" unite, the disappointment could be marginal," V. Vobolevičius stated.

Catchall and severed link to the people

V. Vobolevičius stated that in seeking the reasons for parties weakening, we should consider the trends of weakening political ideologies. According to the political scientist, the impression appears that Lithuanian parties often operate based on the catchall model, seeking to attract voters of varied political inclinations.

"For example, the Conservatives have something that would appeal to liberal voters, but at the same time the party has Laurynas Kasčiūnas or Audronius Ažubalis, who unlike Gabrielius Landsbergis and now former conservative Tadas Langaitis, appeal to a completely different group of voters. Naturally, no one feels sufficiently "at home" with those parties. If one likes L. Kasčiūnas' Conservatives, then they will not like T. Langaitis' Conservatives and vice versa.

On the other hand, I am uninclined to see those parties as doomed because unlike the chrestomathic mid-20th century in Central Europe, where there were very clear, large political groups such as the Christian Democrats, Social Democrats, now everything is very fragmented and there aren't such large groups. And the new groups (everyone now has a youth "fetish") often don't even vote. When the electorate is so fragmented, I daresay unstable, then we can also understand parties, which do not want to become ones, which are uncertain if they can overcome the five percent barrier and thus create various "menus" for voters," the academic mused.

According to him, the mixture of various political views leaves voters in an uncomfortable position – wanting to remain loyal to a specific party, they continue to vote for it, even if not all its declared values appeal.

"A cursed cycle emerges, where parties create catchall policies to match all voters, while on the other hand, no voter is left truly content because the elements of the catchall may not match," V. Vobolevičius commented.

According to the political scientist, the disappearance of ideological distinction in parties can also be seen in politicians' discussions, party programmes.

"Take how everyone speaks for science, breakthrough, Lithuanian security, that is to say things that can in essence be resolved by a farmer like V. Matijošaitis. But where you need to take from someone, give back to someone and justify it with a moral argument, the parties do not venture," the expert stated.

When asked, why Lithuanians continue to mistrust political parties, V. Vobolevičius emphasised that the roots of this should be sought in the circumstances of the parties entering power. According to him, when traditional parties were born in Western Europe, fighting for the rights of specific social groups, Lithuanian politicians entered power under different circumstances.

"All the parties were brought into power with that singing revolution and suddenly, after 1990, after the elections, you no longer need to maintain a close connection with the people because the people took you, still not formed, still fragmenting, carried you to power. You have completely different tasks – it was necessary to govern the country, to resolve critical economic problems. Furthermore, you have a greatly changing society – those who were wealthy yesterday have become poor or emigrated today. And in this situation you, as a party, do not have any interest in establishing a connection to the masses, in mobilising them, changing party newspapers, attracting people.

Our parties, unlike those in the West, have not rooted themselves in society. If Western parties needed those social groups to survive, in Lithuania it was unnecessary because it was just handed to the parties in Lithuania. Parties did not work with voters, except some pretences – "here's our programme, our stars, our promises." In other words, parties worked little with voters to inform them, to involve them in politics not just for an ideological, but also a social role," V. Vobolevičius explained.

A record-high number of people in Lithuania trust the country's army, the latest survey has revealed,...