Minister of economy after swearing in: I am at no risk of conflicting interests 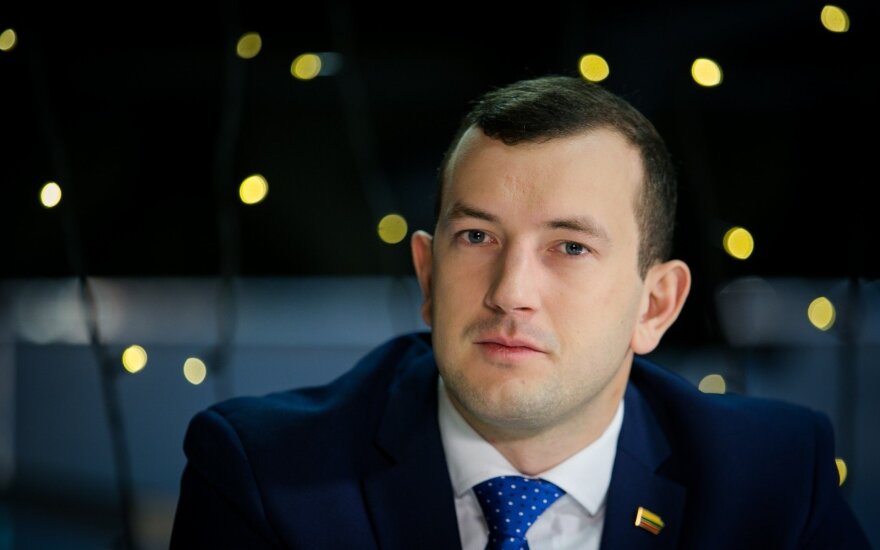 After swearing in at Seimas on Tuesday, "Farmer" Minister of Economy Virginijus Sinkevičius says that one of the country's greatest problems – emigration – could be resolved by the creation of well paid jobs, thus the Lithuanian economy should focus on high added value sectors, Lrt.lt writes.

"It is not the growth of the GDP that feeds a person, but their wage," the 27 year old politician told BNS in an interview.

He believes that the Lithuanian economy should concentrate on biotech, laser and the financial technology sectors where achievements have already been made. He would also like for the state owned company dividend payment to be depoliticised.

V. Sinkevičius does not support the idea to merge the ministries of energy and economy in the future. However upon the conclusion of energy network synchronisation with continental Europe, the Ministry of Energy could be merged with the Ministry of Environment.

The minister, moving out of the Seimas Committee of Economics mentioned that he has not yet chosen vice ministers, however the list of potential candidates does not contain any individuals linked to the party. He also notes that the ministry needs to become more recognisable, likely focusing on its support of innovation as a means of distinguishing itself. Furthermore, he explains that the economy should be oriented toward the fourth industrial revolution, all the while traditional concerns of business environment, encouraging exports and investment conditions also need to be considered.

Minister Sinkevičius outlines that the biotech, laser and financial technology sectors, where Lithuania has already made strides, should be focus areas. He explains that to do this his first priority will be to gather a team, the vice ministers and advisors who will act as project leaders and will contribute in outlining how Lithuania could stand out in the region in the aforementioned focus areas.

A particular issue that the minister points out, however, is that while achievements have been made, there is a lack of human resources to expand with due to a lack of specialists being trained in areas such as biotech. "The vocational education reform which I have contributed to and that is proceeding today in parallel to the higher education reform, these are inseparable matters. Education is inseparable from a stable economy. We can orient, reorient for thousands of times, however if we lack the people, any economics textbook will say that it is people that create the economy" V. Sinkevičius stated.

In terms of emigration, the minister notes that a key contributor to reducing the phenomenon would be reduced bureaucracy, with those intent on creating a business being faced with a massive bureaucratic apparatus – 57 oversight institution and 54 pieces of legislation, which confounds and greatly reduces motivation. This, V. Sinkevičius explains, needs to be simplified so there is clarity from the point of business creation to taxation, adding that it is economic growth which leads to the creation of jobs and rising wages, with it being the latter that keeps people fed, rather than a rise in GDP.

While there are talks of immigration from third countries resolving problems of lacking employees, the minister finds that the country should nevertheless prioritise the return of locals, even while the list of needed professions which have simplified immigration procedures has been working successfully.

For a time now there have been talks of a merger between the ministries of economy and energy. Minister Sinkevičius does not support such an initiative, explaining that for one, the Ministry of Energy works with issues of crucial importance for the state, which are possibly the final steps to true independence, namely energy network synchronisation, the closure of Ignalina nuclear power plant and negotiations regarding its closure financing which have been made more difficult by Brexit, as well as the new energy strategy. "I believe that before 2025 and before the implementation of synchronisation there is no possibility of a merger between the two ministries," he notes.

The second presented reason why the merger should not go ahead, is that notions of the Ministry of Energy having been a department of the Ministry of Economy and the two being based in the same building are insufficient arguments. Instead the minister believes that after 2025 there will be basis for a merger of the ministries of energy and environment, with the Ministry of Environment working on comparable projects and having similar tasks, circular economy. The merger, V. Sinkevičius explains, could resolve certain overlaps in projects and functions.

Regarding proposals for increased state owned enterprise floats in the stock market, the politician explains this could be the next step to take after reforming the companies, but only then, so as to gain the greatest value. First their reforms must be completed and their status could then be changed to joint stock companies, their functions and activities reviewed.

"It is very important, which companies partially or fundamentally perform social functions and the state is ready, if need be, to support them. Which companies should pay dividends in the years they do not invest in. The Ministry of Economy should take lead here, however in order to avoid conflicts of interest it should relinquish the state owned companies it manages, though there are only two of them," the new minister of economy stated, adding that the role of the Oversight and Forecast Agency (SIPA) will become very important, even while it is currently inactive. This would be not only in enacting the Organisation for Economic Co-operation and Development recommendations, but also to outline the responsibilities of state owned company board members.

V. Sinkevičius was not yet willing to reveal which companies could participate in the stock market, explaining that stock floatation is often misinterpreted by the public as privatisation. For now he explains it is necessary to review the companies' portfolios and reductions in oversight companies and forestries will shrink the portfolio, making it clearer. "Let's change the company status and then we can perhaps talk about next steps," the politician says.

Returning to the role of SIPA, the minister explains that one of its roles would be clearly stating which companies should be paying dividends to the state and which shouldn't, after considering company function, potential, investment and expectations, with each company having different potential for contributions. He emphasises that dividend payments from state owned companies must be depoliticised and instead such considerations should fall to professionals at SIPA.

Regarding internal transactions within state owned companies, V. Sinkevičius points out that he was one of those in support of implementing this measure, despite municipalities opposing the step, claiming it would cause numerous problems. The minister admits that in certain cases internal transactions can be beneficial and the current public procurement legislation is strict, but nevertheless such transactions must be an exception and must have oversight.

"Overall my vision is to strengthen the Central Purchases Organisation (CPO) through which more purchases could be made and this would mean more transparency and effectiveness. Today the problem with the CPO is its catalogue. Everyone will ask how I can buy there when it still has the old Nokia 3310. I believe that the catalogue could be expediently renewed and spoke a little with the head of CPO, the resources are there for it, however there must be a return communication. Institutions have to inform about the planned purchase and the parameters they require. Usually we know that one parameter – 6 or 7 USB connections allows to successfully choose a supplier.

We will review the CPO's capacities and opportunities to increase the number of purchases. Over the past few years it has been exhausted and written off as unnecessary, but I believe that its role needs to be strengthened," V. Sinkevičius stated.

When questioned whether he will be able to achieve everything he has set out to within the remaining three years of this term, the politician responded that he is demanding, patience and a strong team will be needed and what matters most is to not waste time on unimportant matters. He already has a list of vice minister candidates, but has not spoken to anyone of it so far, awaiting the president's final say. The new Minister of Economy emphasises that there are no individuals with party affiliation in the list, albeit he is unsure whether the selected candidates will agree due to him being unable to offer a high wage.

With previous ministers of economy having been noted to have mixed public and private interests, V. Sinkevičius quips that he is fortunate to come from a very simple family, with his mother working as an assistant nurse, his sister still studying and other relatives not having any businesses. Nevertheless he does admit that there are numerous risks and that ministers are a target.

In terms of his replacement in the posts of chair of the Committee of Economics and "Farmer" Seimas group deputy prefect, the situation varies. While the minister finds it difficult to tell regarding the post of deputy prefect, he intends to propose a democratic election, where the group's colleagues would propose nominations and a secret vote would be held to choose the most suitable candidate.

Matters are different with the Committee of Economics. While there is a quota upon which the position belongs to the "Farmers", the post of Minister of Economy belongs to the coalition partners and the matter will need to be discussed during a Tuesday coalition meeting. While no specific names have been brought up, V. Sinkevičius suggests that realistically there are two main candidates – Algirdas Butkevičius or Andrius Palionis, but this is still to be discussed.

Finally the minister notes that despite their shared surname, he and former Minister of Economy Mindaugas Sinkevičius are not related in any way, having made acquaintance only at the start of this term.

Virginijus Sinkevičius was sworn in as Lithuania's new economy minister in the parliament on Tuesday.

Energy independence: is Lithuania getting away with state aid?

The EU says Lithuania can levy funds from gas consumers to finance its own energy companies. Achema,...

Lithuanian minister of economy nominee's young age: an asset or a liability?

Lithuanian MP Virginijus Sinkevicius is poised to take a big career jump to become the country's...