DELFI
aA
Raimundas Karoblis’ name has so far not been well known in Lithuania. A career diplomat with over 20 years of experience, he himself was surprised by the proposal to become Minister of National Defence. He is inheriting a ministry with both an impressively rising budget and at the same time – the taint of corruption, but the former diplomat tells Delfi TV that in the end he decided to operate on the idea of “If need be, then so be it”. 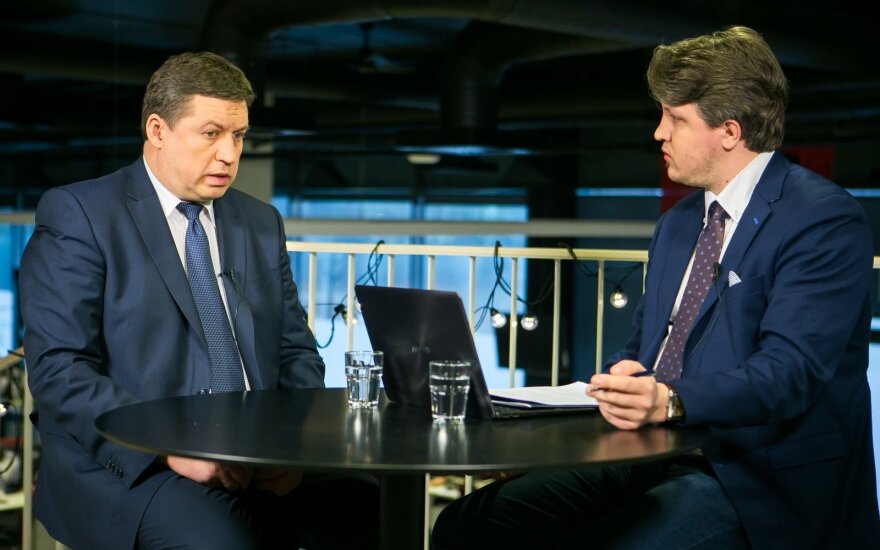 A vastly increased work tempo, already occurring meetings with Baltic and Polish ministers of defence, such was the agenda of the new minister, who assures he sometimes continues to use public transport to go to work.

Having worked in the Ministry of Foreign Affairs for the majority of his career and having represented Lithuania to the EU from 2010 to 2015, R. Karoblis moved from MOFA Vice Minister to Minister of National Defence, with the choice of appointment having been left to the President.
Unlike the names of some other ministers, Karoblis and his past were not found objectionable by anyone, but he has inherited the ministry from Social Democrat Juozas Olekas, who according to the President had “compromised himself”.

The opinions of J. Olekas and the two other key figures in national defence – the President and the chief of defence Lieutenant general Jonas Vytautas Žukas were observed to clash a number of times.

R. Karoblis noted that he intends to seek close cooperation with both the President and the chief of defence, noting that the previous relations were sending ambiguous messages. He notes that he should be able to work with general J. V. Žukas well, given their work together in Brussels as military representative to Lithuania.

The new minister also did not share the same opinion as J. Olekas to Crimea, pointing out that the latter’s call to sleep peacefully despite the 2014 events in Ukraine would not have been something he would have done. While Karoblis admitted he wouldn’t have suddenly urged to buy emergency supplies, he noted that he absolutely could not sleep peacefully in Brussels then and that there was much work to be done to mitigate the threat, noting Lithuania was one of the first to suggest a strong reaction against Russian misdeeds.

While financing for national defence has strongly risen over the past few years, the scandals that hit the sphere have hurt its image, with for example the so-called golden fork scandal being a notable example. R. Karoblis assured he would seek to ensure such events would not repeat, intending to apply good practice from foreign countries such as Germany, Denmark, Norway and Estonia in establishing a separate procurement agency, which is expected to “optimise procurement, increase control and ensure that such events [corruption scandals] do not occur”. He noted that such an agency could start operating already from the start of 2018.

R. Karoblis has had little time to get used to his new position prior to being faced with his first scandal, with the appointment of Tatjana Ramonienė as the head of the Lithuanian Riflemen’s Union regiment in Šiauliai. Doubts were cast upon the reserve captain due to a photo being discovered with her happily posing with a Russian flag. With Russia being seen as a threatening state, such behaviour cast certain suspicions, leading to R. Karoblis halting the appointment procedure for T. Ramonienė and two other regiment leaders. He noted that it is emotionally not normal that the representative of an organisation such as the Riflemen’s Union would pose with a Russian flag.

Minister Karoblis was not overly enthusiastic about either idea, stating that “Funding for national defence is funding for national defence,” implying that while cooperation with law enforcement is necessary, there should be no separate lines in the funding and the direction of it should be transparent. The idea of military training at school did not appeal to the former diplomat either. He noted that rather than learning “to disassemble rifles or march and shoot”, there should be more patriotic education, done by officers. Karoblis found that it would be more suitable to ensure that the independence struggles of Lithuania and the post-war events need to be well understood, patriotism encouraged and while a limited military aspect could be included, it should not be the focus.

Such training as proposed by Karbauskis, could not replace the drafting mechanism according to the Minister of National Defence. He continued with the notion that in 8-10 years there could be a move from a volunteer and lottery based approach to a total military training regimen, which would include not only males, but also females, particularly considering the demographic issues Lithuania is faced with. Nevertheless he notes that such moves would have to be taken gradually, firstly resolving infrastructure and procurement issues which would then allow a move to total drafting and so on.

Karoblis also noted that the current mechanisms for punishing those evading service are fairly lax, but should be gradually strengthened as the size of the military is expected to rise from the current 14 thousand to 30 thousand.

The minister pointed out that it is very important that national defence spending will grow and noted that while Lithuania expects to reach the NATO requirement of 2% by 2018, it is not the limit and depends on the threat level, with room being present to go for 2.2 or even 2.4%. That said he observed that first there is a need to ensure more transparent usage of funding before discussions of further funding increases could be done, something that the minister stressed “should definitely be done”.

An example he presented was wage rises for troops, with an average rise of 20% this year. R. Karoblis noted this is important because there is a lack of professional soldiers and officers, something that could be remedied by increases in wages.

Furthermore the minister explained his vision of continuing the modernisation of the military, from continuing current projects such as APC, howitzer, anti-air and anti-tank equipment, but also renewing the military’s helicopter fleet, ensuring the permanent presence of allied forces and integrating the Riflemen’s Union with the national defence volunteers, with the latter structure having been largely ignored lately, but having started to recover.

R. Karoblis noted that he would support the decision to allow national defence volunteers to keep their arms at home, but admitted this would first require reviewing, despite similar initiatives in Estonia.

Lithuania should allocate more than 2 percent of its gross domestic product for its national defence...

A general reserve of national defence should be prepared in Lithuania's education institutions,...

The so-called “golden fork” scandal has not yet settled, but it may very well be that Minister of...