Rimvydas Petrauskas | ldkistorija.lt
aA
Around 1250, with the help of great military and diplomatic efforts Mindaugas managed to dissolve a union that posed a serious threat to his power. During political negotiations Mindaugas’ daughter of unknown name was engaged, and later she was married off to Švarnas, a son of Duke Daniel of Galitch-Voluin who was one of the greatest rivals to the Lithuanian King in the region. That was the first marriage of the family of the Lithuanian Rulers, which can be called interdynastic. 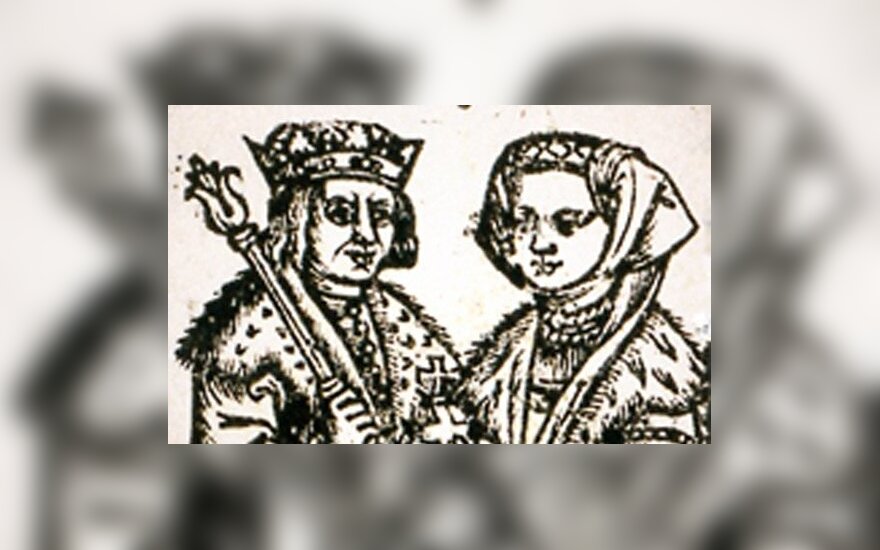 Another event of this kind occurred in 1279, when Traidenis' daughter Sofija Gaudimantė married Masovian Duke Boleslov II, thus starting the tradition of dynastic marriages with the Dukes of Masovia that were important in the history of Lithuania. Since then a daughter of almost every Lithuanian Ruler down to Jogaila (Jagiełło) and Vytautas became Duchess of Masovia. Lithuanian princesses, when they made their home in Masovia, acted as a go-between for the pagan relatives who experienced isolation and helped them find diplomatic roads to the West. This peculiarity of Lithuania's political communication is clearly revealed in Gediminas' letters written in 1323 to the cities of Northern Germany and Franciscan and Dominican monastic institutions in which the Grand Duke offered those who were travelling to Lithuania to go via the lands of his son-in-law Duke Vaclav of Masovia: "We shall provide you with a free possibility to come to our land and leave it via the Dukedom of the Duke Vaclav of Masovia".

Related articles
Reformation in Renaissance Samogitia: the family of Skaczewski
What did burghers wear in Medieval Lithuania?

The prestigious marriage – a means of consolidating the dynasty

Such marriages were not merely a means of implementing political goals. Military unions created by means of marriage were a rather temporary thing, which the marriage of Gediminas' daughter Ona Aldona to Casimir (The Great in the future) the son of the King of Poland Władysław Łokietka showed, when friendly Polish-Lithuanian relations lasted hardly several years. Marriage with the representatives of other royal or ducal families first of all meant the recognition of the international dynasty, provided new possibilities to consolidate its exceptionality within the country – it was only the ruling family that could find a partner for itself in the international market of marriage. Therefore a prestigious marriage strengthened the status of the ruling families of both parties. This is what happened to the first marriage between the families of the Polish and Lithuanian Rulers – the abovementioned marriage of Gediminas' daughter Ona Aldona and the son Casimir of the Polish King (in 1325), which provided both parties with the possibility to underline their monarchic exclusiveness. The branch of the Piast dynasty that became predominant in Poland at that time was just finishing overcoming the division of the country, and Gediminas' family on the whole made the first steps in a broader regional policy. Dynastic and political reasons were much more important than confessional barriers, which the baptism of the partner helped to overcome – all the princesses of the Gediminids who married abroad accepted the Catholic or Orthodox baptism.

Elžbieta Gediminaitė: half a century spent in a foreign country did not break off her relations with her native land

It is worth noting that Gediminas arranged the first dynastic marriage during the first years of his rule – in 1316, when he married off his eldest daughter Elžbieta to Vaclav, Duke of Masovia-Plock. Elžbieta's especially large dowry – 720 silver and 9 gold Marks – demonstrated the political significance of this marriage. A potential factor of the support of the father's family is especially significant in case of widowhood. In 1336, after the death of her husband, Elžbieta managed to handle her own and her children's legacy independently quite successfully. In 1337, she married off her daughter Ona to Henryk, Duke of Silesia, she created a significant political counterbalance to the political union headed by Casimir, the King of Poland. It seems likely that in this case she acted with the knowledge of her father Gediminas. Nonetheless, political unions were not a sustainable phenomenon therefore it should not be surprising that Elžbieta Gediminaitė's only son (Gediminas' grandson) Boleslovas was killed in 1351 during the armed conflict with the Lithuanians (who were led by Gediminas' son). True, the story of Kęstutis' escape from the captivity of the Teutonic Order in 1361 when he found refuge at first at his sisters' who lived in Masovia for almost half a century shows that Elžbieta preserved personal relations with her family to the end of her days.

There were tragic stories too when Lithuanian princesses were left alone and forgotten in a foreign country. This was the case with Gediminas' other daughter Marija who married Grand Duke of Tver Dmitri Mikhailovich. Thereby this marriage contract Gediminas began the tradition of maintaining personal relations with the rulers of Tver: as in the case of Masovia, marriage relations were established in every further generation of the Gediminids with the Dukes of Tver among which the second marriage of Duke Algirdas to the princess Julijona of Tver was known best. The fate of Marija in Tver was unhappy – just several years after their marriage her husband was murdered, and she spend the rest of her long life in a convent. A lack of contacts between the princesses and their relatives who stayed in Lithuania reflect itself in the story of another daughter of Gediminas, Augustė Anastazija. Her brother Jaunutis dethroned in 1345 expected to find refuge at his sister's who was married to Grand Duke of Moscow Semion Ivanovitch. However, the news about her death had not reached Jaunutis.

Nonetheless, dynastic marriages in medieval Europe played an exceptional role. Negotiations were held prior to the wedding trips, which had a significant function of cultural knowledge. The princesses were usually accompanied by the escort, which stayed with them in a new place for some time. In this way long-lasting contacts between the estates could have been established. Gifts usually established a personal relation between the future spouses who had not seen each other before (it was later that portraits were sent together with the gifts). Therefore one can believe the story told by the Polish chronicler Jan Długosz about an intimate commission of the Polish princess Jadvyga to the envoy who was going to Lithuania – to describe the appearance of the future spouse Jogaila (Jagiellon). Most probably this was a usual part of arranging medieval marriages.

We can say very little about the life of the Lithuanian princesses in the 14th century. We do not know everything about them – these are traces of their life in a foreign country. The earliest historiographic sources of Lithuania – the Lithuanian chronicle – did not specify even the names of those women though their authors recorded carefully the sons of Gediminas, Algirdas and Kęstutis. Sometimes we cannot be certain about the Lithuanian name of the princesses. For example, it was the chronicler Motiejus Stryjkovskis who "procured" the pagan name of Aldona for Gediminas' daughter Ona. The author of the later genealogy of the Dukes of Masovia gave the name of Danmilė to Gediminas' daughter Elžbieta. In the church and historic memory they remained as "devout princesses" (S. C. Rowell) and the churches that they funded and supported still remember their activity.

Coffee, tea and chocolate were exotic drinks in Europe as they became popular in the 17th and 18th...