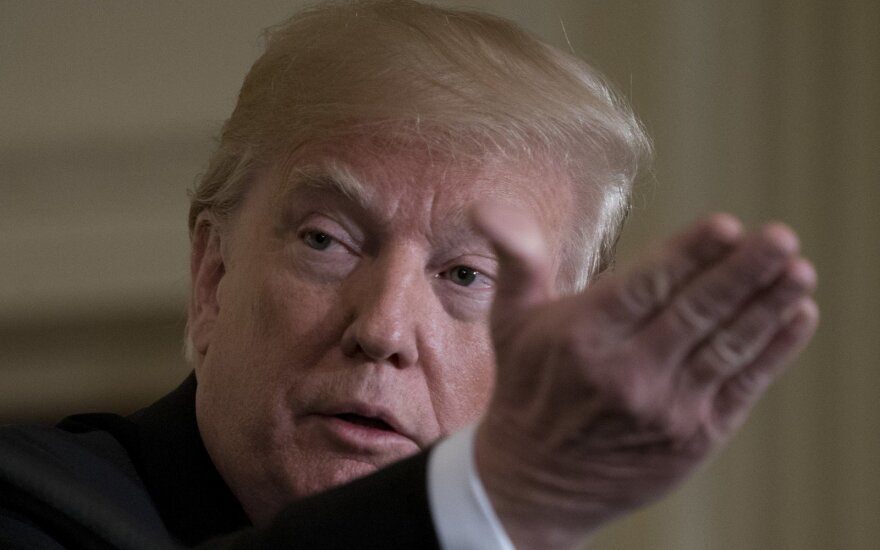 Over a year has passed since Donald Trump's electoral victory in the US presidential elections. However, in the USA, EU and Lithuania this victory is still often presented either as an unfortunate accident or as the victory of Russian hackers, or the magic of Cambridge Analytica. The truth lies somewhere beyond in this case. And this truth, I would dare say, is especially important to Lithuania, Matas Maldeikis writes on lrt.lt.

Every historical period demands leadership of a different style because each period forms different moral and social societal paradigms, defining a different political climate. This phenomenon is best described by the German word zeitgeist (to paraphrase Hegel, it is the spirit of the time, which best reveals the qualities of the present age). When looking at the current US president, we see the best reflection of the contemporary zeitgeist. He is no accident in history, he is its herald.

Related articles
Linkevičius on Trump: responses based on real actions, not words
Žygimantas Pavilionis. Another important victory, this time in Washington  (1)

To observe this newly forming world, we must understand that, which is departing. To do this, we must return to 1944, when the old world order was compiled in the US resort town of Bretton Woods, an order that functioned for 50 years and allowed the USA to win the Cold War.

This system was based on the USA, which formed the institutes of international trade and, with the strongest navy in history ensured safe trade across the world's oceans. This way a global trade network was created. At the same time, the USA presented to its allies the greatest possible victory – access to its expansive market. It was the best the latter could dream of and why the same countries earlier would become embroiled in wars with one another.

Now the opportunity to exploit a massive market was simply presented on a platter and the recipients of the gift were essentially bribed into becoming the US' allies in the Cold War. When ruling such globe-spanning markets and employing a constantly growing technological edge, the Soviet Union was doomed in the long run.

With the fall of the Soviet Union and there only being one global hegemon left, the Bretton Woods system, as it appeared to the allies, became outdated. The well-oiled system continued operating for another twenty years, but it became ever clearer to the USA that there is no point to maintain this order at its own expense. No one called off realpolitik in foreign relations.

The last nail in the old system's coffin was shale technology, which guarantees that the other countries lost their final – energy – factor, which they could use to influence US policy. This is especially evident in the nervous policies of Saudi Arabia. The USA is becoming completely independent from the global conjuncture.

A new world order is forming in front of us, one where the country, which once paid for the parties is now saying "Enough. Buy your own beer." Truth be told, former US President Barack Obama tried to touch upon such matters as well, however everyone got used to his excellent speeches with no actions and he was not heard.

The main feature of this new world is the pursuit of mutually beneficial activity, now presented through Donald Trump's lips or in his Twitter profile. What does it mean to the other participants of the system?

It will be those countries, who can offer the USA mutually beneficial cooperation that will be able to become US allies in the newly forming world order and to share in the US' economic and military prowess. In this context, we should primarily keep in mind Japan, South Korea and Taiwan (markets and counterbalance to China) and the UK, which especially after Brexit, primarily due to close historical relations, will be forced to turn even more to the US.

In Europe it is likely that Denmark may take the largest piece of the pie, with its control of access to the Baltic Sea, the Netherlands (due to the capacity to control trade on the Rhine), Turkey with its control of the Dardanelles, silently lingering military and financial power in the shape of Sweden and Poland as a counter point to the Russian Federation. We see countries who, due to their geography or other factors, can present the USA with mutually beneficial cooperation.

And here arises an important question for us: where do Lithuanian interests and opportunities lie in this new paradigm of US actions? So far, Lithuania is viewed as an "indefensible territory, which could be an effective fishbone in Russia's throat during peacetime." And thus the largest challenge of our foreign policy in the intermediate period is to find our place in the forming world order, manage to form and justify what we could offer and what the USA would be unable to or unwilling to relinquish. Such a proposal would become the most effective 21st century Mannerheim Line for us.

Adam Smith spoke of the invisible hand in economics. In politics, foreign policy being no exception, there is the same sort of invisible hand. The issue is that it acts in a dark room and we must nevertheless seek it out and shake it.

Matas Maldeikis is the Seimas' Permanent Representative to the European Union.

Linkevičius on Trump: responses based on real actions, not words

Trade wars will affect ordinary people, not politicians - Lithuanian president in US

Lithuania's President Dalia Grybauskaitė said during a visit in the United States that the three...

Kęstutis Girnius. US naval base in Klaipėda?