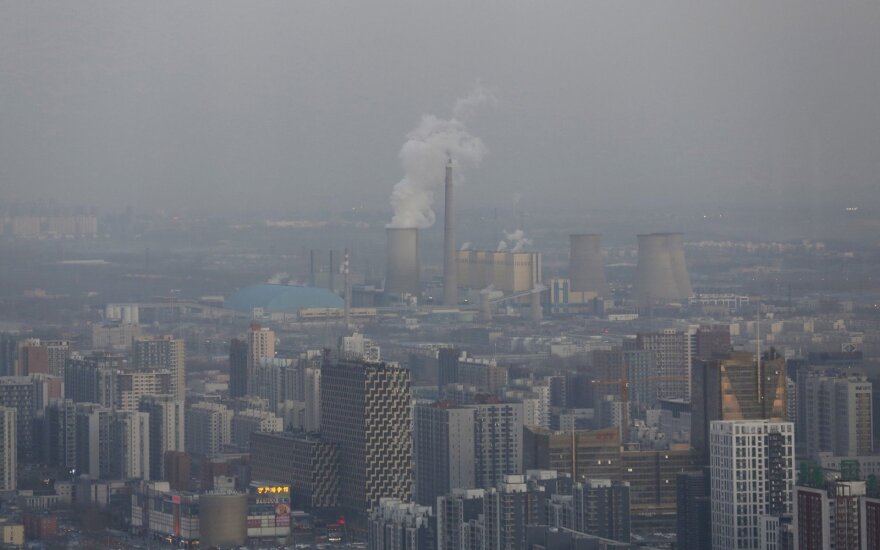 Last week, the State Security Department (VSD) presented information to the Seimas National Security and Defence Committee (NSGK) over threats linked to Chinese investment in Lithuania. The Lithuanian government, ignoring US and German warnings, is sacrificing national security interests in the name of Chinese plans to construct an external port in Klaipėda. Such short sighted politics have made a number of Asian and European states the victims of Beijing's geopolitical ambitions, thus the offers from China, which is seeking to become a world power, to invest in Lithuania must be evaluated with great care, not only via the prism of economics, but also politics, Mantas Macikas writes on lrt.lt.

The Belt and Road Initiative or the New Silk Road is an infrastructure project presented by the Chinese president in 2013, which seeks to challenge the USA and establish Chinese transcontinental dominance. In terms of rhetoric, it is one of the most ambitious economic projects in modern history.

Based on this initiative, Chinese held companies have committed to investing 900 billion dollars for the necessary works. Also, the Asian giant has laid down a serious challenge to the World Bank by providing loans to developing countries, mobilising their financial markets.

This project is comprised of six separate land trade corridors and another three naval trade lines. Investment in strategic infrastructure – ports, roads, railways, pipelines and telecommunications networks means China would physically integrate 65% of the world population or in other terms, 60% of Asia, Africa and Europe, thus creating favourable leverage for itself in politics and economics.

Since the Silk Road project is competitive, countries met with financial difficulties are competing for Beijing's generous offers in creating industrial zones and trade routes.

While other Asian states are also implementing economic projects of varying scales – Japan, South Korea, Taiwan and such, it is namely China that raises concerns among security experts due to its aggressive competition, breaching international investment law and also rapidly increasing its military capacities.

Meanwhile, China repeats that the Silk Road is a beneficial project for all countries and no one should worry over alleged geopolitical ambitions.

Chinese entrenchment in Europe and conspiracy with Russia

However, as the examples of some South Asian countries show, countries must consider not only considerably brief commercial advantages, but also long term national security interests.

By investing into seaports and creating logistics centres, China always retains the right to defend its interests abroad, if need be with the patrolling of its navy, organising military exercises with favourable countries in order to avoid conflicts.

After decades of deterioration, Russia's hopes to renew its military navy and expand naval nuclear deterrent capacities have expanded. Meanwhile, China hopes to create a modern navy based on artificial intelligence, thus the two countries need bilateral cooperation in military matters. Furthermore, with Moscow and Beijing seeking to realise these goals, they need to organise increasingly frequent military exercises and joint operations in marine zones.

It is worth remembering the join Russian-Chinese naval exercise Joint Sea 2017, which was held in July 24-27 last year in the Baltic Sea. While these countries have been organising similar exercises across the world since 2012, this was nonetheless the first time it was held in the Baltic Sea. For Russia, these exercises are necessary to act as a balance against the annual NATO exercise BALTOPS.

Meanwhile, China, whose interests in the Baltic Sea region are currently only linked to economics, responded to this Russian invitation very positively because Beijing still lacks military allies, who would ease the PLA navy's participation.

Considering Chinese foreign investment and trade interest security in Europe, it is likely that joint Chinese-Russian exercises in the Baltic, Black and Mediterranean seas will occur ever more frequently.

Disregarding Moscow and Beijing's strategic competition, it is clear that there will be ever more points of contact between the two countries.

Russia still fears China's economic power and is concerned over mass Chinese migration flows into the Russian Far East, while China is dependent on Russian cooperation in Central Asia over the ambitious Belt and Road initiative. Speaking simply, Russia is strong in terms of its military, but economically weak. This country's main export products are raw material and weapons technologies. China is economically powerful, however it has excess capacities in its industries, thus it must import the goods types that Russia can offer.

Russian and Chinese capacities to form various types of military alliance must be carefully considered by Lithuanian security experts because such cooperation between the two countries will influence strategic partnership linked with potential military confrontation, thus European states and the United States should quickly find common agreement in the NATO agenda as a counterbalance to such friendship between Russia and China.

The world trade race does not bypass Lithuania. Considerations are ongoing in Klaipėda over expansion and the construction of an external deep-water port, which could cost around 800 million euro. While the Lithuanian government does not reveal potential financing sources, according to some Lithuanian officials, one of the most likely scenarios would be that of Chinese investment.

In 2015, a Chinese owned transport, logistics, real estate and finance group China Merchants Group (CMG) spoke of the possibility to transport goods through Klaipėda. The company is developing the Great Stone industrial park in Belarus and the most direct route for exporting production would be through Klaipėda.

The then CMG board chairman Li Jian Hong stated in 2016 that Klaipėda port should become the corporation's gate to the Baltic Sea. What does such Chinese imposed planning mean for Lithuania?

Did the Lithuanian government and finance minister discuss with security experts, what potential threats Chinese investment into the strategic Lithuanian port of Klaipėda could pose? Were scenarios for a conflict situation analysed if the Chinese owned company chose to block the port gates? These doubts have a serious basis.

Considering scientific research on the Belt and Road Initiative and Chinese cooperation with Russia, we must not ignore US, Japanese, South Korean and Taiwanese security experts' conclusions.

This ambitious project belonging to Beijing not only encourages trade and economies, but also raises Chinese influence to political decision making in countries, which open their markets and under a conflict creates conditions for China to deploy military equipment.

State competition for the generous proposals of China often leads to sacrifices in national security interests. The benefit of investment is easily understandable and necessary for economic development, however does Lithuania realise that opening up to investment from a communist state could lead to the state's geopolitical drift toward the East over the coming decades?

Lithuania must realise that national security interests are not limited to just Russian military threats. There are economic threats, which clearly are not understood by this cabinet and Seimas.

This is exactly the time to discuss these important questions for institution leaders, otherwise ignoring expert conclusions will turn Lithuania into a part of communist and cleptocratic states' agenda.

Mantas Macikas, is an analyst of the Washington Hudson Institute.