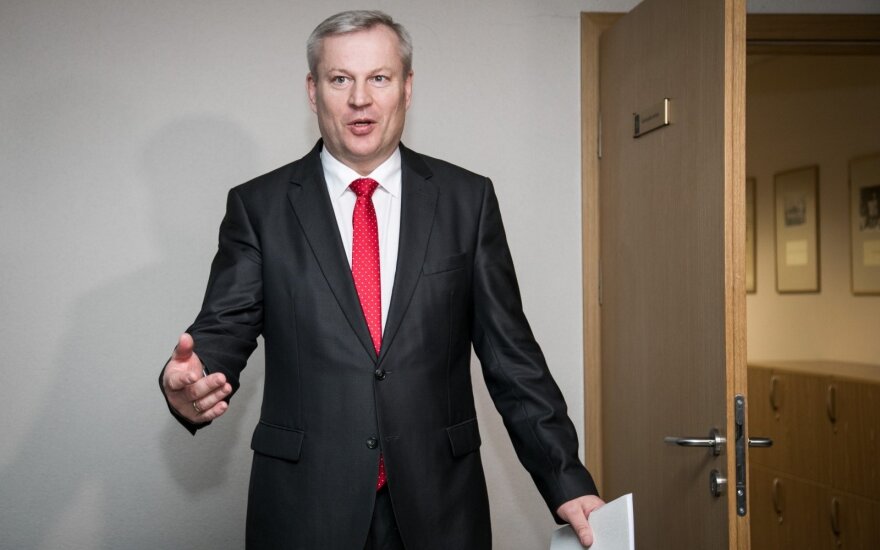 The political intrigues in Seimas and the vote held on March 13 regarding MP Mindaugas Bastys, who severely breached the Constitution, have been like purgatory: he is leaving Seimas with his head held high and will be able to run for office in Seimas once more in 2020, LRT.lt writes.

"Everything looks normal because I believe he convinced a number of MPs that he is innocent regarding his cooperation with former KGB employee Piotr Voyeiko. And how many parliamentarians have visited the Russian embassy? I have. M. Bastys acted correctly in withdrawing from Seimas. He will be able to run for office again," Seimas vice Speaker, Social Democrat Labour group member Gediminas Kirkilas told LRT.lt.

He made this statement in response to the situation in Seimas after 72 MPs, not 85, the minimum requirement, voted in favour of M. Bastys' impeachment, while he went on to relinquish his mandate. G. Kirkilas also stated he believes that M. Bastys can win back his mandate in 2020 because "many in Lithuania like politicians who have been beat on."

M. Bastys assured LRT.lt that he had not decided yet, whether he will participate in the 2020 Seimas elections. He restated that he does not feel guilty and has answered all the needed questions from the impeachment commission.

M. Bastys planned his move ahead of time?

"Yes, he is leaving Seimas as a winner, able to calmly participate in elections. It was long clear that it would be this way. We just thought that he would declare his departure on Tuesday – prior to the vote regarding his impeachment. However he waited for the results and will now be able to posit himself as a victim," Liberal Movement leader, MP Eugenijus Gentvilas mused.

When evaluating the results of the vote, where "Farmer" representatives with Ramūnas Karbauskis and Prime Minister Saulius Skvernelis at their head explained that their group members made photos of their ballots with their cell phones, the liberal representative stated that this fact makes a case to call upon law enforcement.

"We will inquire alongside law enforcement whether illegal influence was not cast upon MPs in demanding to photograph secret voting ballots. This was confirmed by both S. Skvernelis and R. Karbauskis and the Seimas Committee of National Security and Defence head Vytautas Bakas said on TV that there were discussions in the "Farmer" group, how to vote. All these facts suggest potential criminal activity," E. Gentvilas said.

Conservative Mantas Adomėnas also took a photo of his ballot. He admitted that such behaviour runs counter to the Seimas statute and he took the photo just in case.

Social Democrat group representative Dovilė Šakalienė also did not deny doing similarly: "It is just emotions. I was greatly annoyed by my colleagues' discussions that it was already obvious that an MP (M. Bastys) had collaborated with a KGB officer. It cannot be explained away with naivety. Such pretences are unacceptable to me.

However, E. Gentvilas is prepared to prepare a declaration in the name of fellow members of Seimas to law enforcement and to gather signatures for the behaviour of colleagues, who took photos of their ballots, to be reviewed.

Not the first scandal

Constitutional law expert, former Constitutional Court judge Vytautas Sinkevičius told LRT.lt that he is convinced that the Seimas' decision to not strip M. Bastys of his mandate is scandalous: "Such a Seimas must be criticised, actions need to be made responsibly, based on the oath an MP takes, with one's hand on the Constitution."

This is not the first time an impeachment vote ends scandalously. In November 2010 there was a vote regarding Christian Party representatives Linas Karalius and Aleksandras Sacharukas' impeachments. The proceedings were initiated against them because L. Karalius was out on holiday during the Seimas session and A. Sacharukas voted in his stead. After secret voting regarding the impeachment, the Seimas was also struck with crisis – A. Sacharukas retained his mandate, while L. Karalius lost his seat. The latter's impeachment was supported by 89 MPs, while the former – only 80 (85 votes needed to impeach).

No less of a spectacle occurred in 1999, when impeachment proceedings were held against former Minister of National Defence Audrius Butkevičius, who was already behind bars for widespread graft. He returned to his prison cell from Seimas with an MP mandate. His impeachment received support from only 70 MPs of the required 85.

In 2008 social democrat, Gintautas Mikolaitis was threatened with impeachment under suspicions that he strolled around Seimas will inebriated. However, his colleagues spared him. Later there were another few unsuccessful attempts to impeach MPs: in 2004 Vytautas Šustauskas risked impeachment due to publicised discussions between him and the now imprisoned Henrikas Daktaras. Back then, the Seimas believed that the impeachment would be too expensive for the scandalous Kaunas resident.

Impeachment also hovered over the head of Asta Baukutė, who entered Seimas from the entertainment world. A number of MPs were infuriated when it turned out the MP could have lied about the location of her husband Kęstutis Rupulevičius' car after a traffic accident. It was offered to impeach her, however the then Seimas Speaker, Conservative Irena Degutienė left the Seimas ethics watchdog to deal with the matter.

Whose word is weightier?

"Those unfortunate precedents regarding impeachment in Seimas arise because the Constitutional Court allows the MPs to make the final ruling. The Seimas should adhere to the rulings of the court and public opinion," V. Sinkevičius is convinced.

How should the Seimas have acted if M. Bastys had not resigned on his own?

V. Sinkevičius explained that in such a case, the Seimas would have had to call upon the Constitutional Court, requesting to explain, whether voting procedures were not breached: "That secret ballots were photographed is not the key issue. It would be necessary to review, why the photos were made. If it was done so that MPs could show their group how they voted, then the question arises – were they able to vote freely? If it was proven, it would be possible to vote again or rule that such a vote is a breach of the Constitution."

How should MPs adjust their interactions?

Everything looks normal because I believe he convinced a number of MPs that he is innocent regarding his cooperation with former KGB employee Piotr Voyeiko. And how many parliamentarians have visited the Russian embassy? I have. M. Bastys acted correctly in withdrawing from Seimas. He will be able to run for office again," Seimas vice Speaker, Social Democrat Labour group member Gediminas Kirkilas said.

K. Girnius states that he believes the Social Democrat Party, who M. Bastys represented in the single mandate Zanavykai electoral district in the 2016 Seimas elections, should have taken interest in his reputation and connections: "If they had taken an interest, it would have turned out that M. Bastys' links are fairly suspect and there is basis to doubt them. On the other hand, his competitors in the electoral district should have taken an interest too. However it is worth observing that it has not been proven that M. Bastys committed treason. Perhaps the interactions (with Voyeiko) are linked with personal gain?"

After it turned out on Wednesday that M. Bastys is withdrawing from Seimas, four opposition groups – the Liberal Movement, Conservatives, Social Democrats, Order and Justice and the mixed Seimas group agreed to seek the initiation of snap Seimas elections. It is proposed to organise them on June 3 this year.

According to E. Gentvilas, such a project has not yet been registered in Seimas because first they aim to obtain more MP signatures. According to the Constitution, snap Seimas elections can be organised as per a Seimas ruling which is supported by no less than 60% of MPs (85 votes).

President blames all political parties for atmosphere of 'bickering' in Seimas

Lithuanian President Dalia Grybauskaitė says that all political parties that have seats in the...

Viktoras Pranckietis says that he has support in the parliament and is not considering stepping down...

Ramūnas Karbauskis , the leader of the Lithuanian Farmers and Greens Union (LFGU), has said that...

V. Nekrošius: there is no chance of snap Seimas elections