Vilija Andrulevičiūtė, LRT.lt
aA
Lithuania's LNG terminal in Klaipėda, launched in late 2014, has been a symbol of its aspiration towards energy independence, although maintaining the facility has proved a heavy financial load. That, however, is changing. 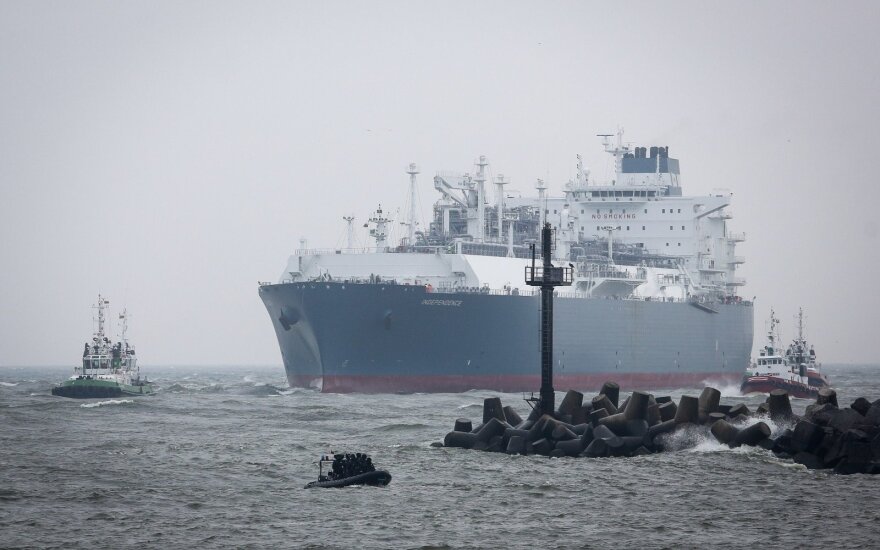 Since Lithuania launched its liquefied natural gas (LNG) terminal in Klaipėda a year and a half ago, the constant discussions has centred around the surplus of gas that Lithuania has committed to buy, which runs up the cost of running the terminal.

Recently, however, Litgas, the subsidiary of Lithuania's state-owned company Lietuvos Energija, has renegotiated its gas supply deal with Norway's Statoil. The new terms, the company says, has allowed to substantially cut the amount of gas that is above the country's gas needs. While under the original deal, Lithuania would have imported about 24% more gas than it consumes, the new terms will cut the surplus to about 5%, Litgas says.

Related articles
Minister of Energy: paradox but occupation isn't over in energy industry
EU aid for Klaipeda FSRU purchase to depend on Latvia, Estonia - EnergMin

Although households have been using more gas lately, alternative energy sources are also gaining traction, which means that natural gas consumption may drop significantly in the future. Since Lithuania buys LNG for its terminal under a long-term contract, this could have resulted in an even heavier burden of excess gas, says Litgas communications chief Paulius Jakutavičius.

"We would have been forced to realize it in the small Lithuanian market, hence probably at a loss, which, in turn, would have significantly raised the LNG terminal's maintenance cost.

"Statoil understood our problems and, regarding us as long-term partners, accepted our invitation to talk about changing the contract. During the negotiations, we arrived at a compromise acceptable to both sides - we extended the term of the contract, but cut annual gas volumes. This allowed us to reduce the cost of maintaining the infrastructure," Jakutavičius tells LRT.

Conservative MP Dainius Kreivys, a member of the opposition's "shadow cabinet", says that a crucial factor in renegotiations was the decision made by fertilizer manufacturer Achema, by far the biggest industrial gas consumer in the country, to buy gas from the LNG terminal. It previously bought its gas solely from Russia's Gazprom with whom it would conclude separate contracts.

"The successful results probably have to do with the fact that Achema started buying gas via the terminal, naturally balancing the volumes. Achema finally relinquished gas from Gazprom, which is a great achievement. It comes to show that the strategy we are implementing - diversifying supply and building our own terminal - is bringing benefits to our country," Kreivys says.

Who could buy the surplus?

Jakutavičius says that, should gas consumption in Lithuania drop even further, the government could ask Statoil to renegotiate the terms again. However, the current volume is close to the minimum amount that the regasification unit must process according to its technical specifications.

Even though the current surplus is relatively small, it still needs to be realized, Jakutavičius notes. The law allows Litgas to sell it in auctions, on the exchange or conclude bilateral agreements. The company says it has already approached several potential buyers.

"We have conducted a survey of potential buyers. There is some interest, but it is yet too early to tell how we will manage to sell the surplus. The price will depend on international prices of gas and oil, on the climate, other factors," Jakutavičius comments on whether it will be possible to sell off the excess gas without suffering a loss.

Lithuania's Energy Minister Rokas Masiulis believes in the future of gas in the country's energy system. He says that gas consumption is growing and if Lithuania could buy out the FSRU from Statoil earlier than the lease expires, it would allow cutting gas prices even further.

"We can confirm that, once we got access to liquefied natural gas, prices went down. Companies now buy LNG not just under mandatory quotas, but voluntarily, because it is cheaper.

"Household consumption is growing. Gas is a clean form of energy, easy to use in homes," the minister tells LRT.

Under Lithuania's contract with Statoil, it has the option to buy out the FSRU when the lease ends in 2024 - and Masiulis says the country is planning to exercise the option.

"We do not rule out purchasing the terminal before that date. For that, we'd need our partners' assent, everything is possible through negotiations. If we purchased the terminal, its cost component in the gas price could be distributed through a longer period and this would make gas cheaper.

"Buying out the vessel would make economic sense, but besides economic benefits, there is also the supply security that the terminal gives us. Lithuania has no other sources, just Gazprom pipelines and the LNG terminal. Therefore we must keep the terminal to have an alternative gas supply," Masiulis says.

Kreivys, of the opposition, agrees: "Certainly, we need to buy out the vessel. Klaipėdos Nafta [the company managing the terminal] has calculated that buying out the vessel is economically advantageous."

Both Masiulis and Kreivys believe that Lithuania should work towards strengthening its position in the gas market, develop infrastructure and become a regional hub of LNG supply and resale. This, according to Kreivys, could bring excellent results for both companies and the state.

Lithuania's talks with the European Commission on EU funding for the acquisition of the Klaipėda...