LT Daily, media brief
aA
Processes proceeding far from Lithuania and right by its borders lead to the conclusion that challenges to national security have not disappeared. Today it is hard to predict how things will proceed thus national defence is one of the priorities of national security policy. 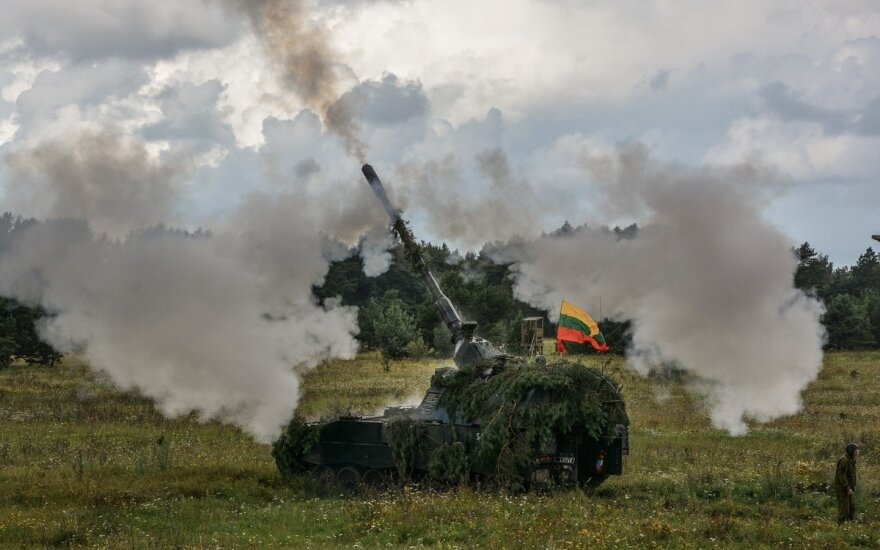 German PzH2000 shooting for the first time in Lithuania
© KAM

Financing for national defence rose this year, reaching 575 million euro, equivalent to 1.5% GDP, which has ensured the modernisation and strengthening of the military. A number of international military exercises took place, with NATO allies participating.

What is most important however is that the leaders of NATO and the US assured Lithuania and the other Baltics that they will not be left to handle threats on their own, while instead measures will be taken to deter the aggressive neighbour Russia.

The Lithuanian military has already announced its newest planned procurements. This could be the multiple launch rocket system MARS. That said official negotiations have yet to begin, but Lithuania has begun consultations on obtaining the equipment from Germany, Norway and the USA.

Also the first BOXER AFVs are to reach Lithuania next year. Two battalions – Algirdas and Birutė – which form the basis of rapid response forces will be equipped with 88 vehicles by 2021.
It is already clear that the country will also be armed with the medium to long range air-defence system NASAMS next year. Long range radar is also being purchased, with the system allowing more rapid warning and reaction for areal threats.

“We see robust support and commitment from NATO countries to participate in defending from and deterring potential aggressors in our region,” said President Dalia Grybauskaitė after a NATO summit meeting in Warsaw in July where the Alliance assured the Baltics and Poland once again that they will not be left alone in the face of a threat. The Alliance is sending four battalions to its forward flank in the East. It is both a response and determent to Russia which continues to organise military drills along the borders of the Baltic States, while gathering troops and supplies in Kaliningrad.

The Alliance battle group will be deployed in Lithuania already at the beginning of next year. It will be headed by Germany, with reinforcement from Belgium, Luxembourg, the Netherlands and Norway. The presence of NATO troops in the Baltics and Poland has been long pursued. There were frequent talks that such decisions should have been made at the 2014 NATO summit meeting in Wales, but until recently such steps have been avoided because the senior members of the Alliance, such as Germany, were concerned that the Kremlin may thus be even more provoked, though specifically Russian actions in Eastern Ukraine and the annexation of Crimea have displayed that the country disregards the sovereignty of others and poses a threat.

“It is not NATO expanding, but Poland, Estonia, Latvia, Lithuania and Hungary all expressed their intent to join the Alliance. Russia should calm down and come to terms with its neighbours choosing their own path,” said NATO Secretary General Jens Stoltenberg.

Lithuania itself did not remain inactive itself. Defence spending has been consistently increased every year. Lithuania has entered the ranks of the best national defence funding states in NATO. In 2017 defence spending should reach around 1.8% of GDP, while in 2018 it is expected to reach 2%. Only a short while ago, however, the military experienced difficult times.

The head of the armed forces had even spoken up about threats to national security due to a lack of troops. In order to replenish battalions it was decided to return compulsory military service. Thus starting with last year the military was supplemented with 6000 conscripts, with another 4500 planned to be drafted this year.

While military service is compulsory, so far all the participating youth volunteered. With Lithuania bringing back compulsory military service, the power of the armed forces rose significantly, with units being filled out and with the army being fully fitted out, supplies for reserves will start being gathered. Lithuania is seeking to have a reserve of 100 thousand troops by 2021.

It has long been understood that the NATO Eastern front – the Baltics and Poland – are difficult to defend thus the Alliance must reinforce the security of its partners. The geographic position of the Baltics is particularly difficult – they are linked to the West by only a narrow 100 kilometre stretch, the so called Suwalki corridor. Experts have stressed a number of times that this area is a weakness because it is surrounded by Kaliningrad Oblast from one side and Belarus from the other. Severing it, NATO troops and equipment would no longer be able to reach the Baltic States by land. Furhtermore the Kremlin is putting in great effort in militarising Kaliningrad. It is believed that Russia is thus trying to form a screen, so that the Alliance, given a threat, would be unable to reach the Baltics by air or water.

The Kremlin has reformed and rearmed its forces in Kaliningrad, a great deal of military equipment is gathered there – tanks, APCs, artillery systems. A month ago the mobile coastal defence missile system Bastion was deployed there, with plans for Oniks anti-ship cruise missiles to be deployed as well. Meanwhile in October, the Iskander ballistic missile system was brought to Kaliningrad. They are capable of carrying a nuclear payload at a range of 500 to 700 kilometres. Moscow is taking all possible steps to raise tensions in the region, but blames NATO for it.

“NATO will continue monitoring, but will definitely not race or escalate, while doing everything possible to ensure the security of its members,” assures Minister of Foreign Affairs Linas Linkevičius.

Lithuania remains concerned with its own defence. Rising defence financing allowed to not only increase the number of troops, but also firepower. In 2016 the first self-propelled howitzers from Germany which can destroy targets at ranges up to 40 kilometres arrived, with the full complement to reach Lithuania in 2019.

Along with the howitzers there were purchases of APCs and evacuation vehicles, intelligence detachments are to receive unmanned drones. A new patrol ship has strengthened coastal defence.

Politicians assure that they will dedicate 2% GDP to defence already this year, but experts are certain that the country is capable of dedicating even 3% for national defence. After all, by raising financing Lithuania is sending a clear message to allies that it views potential threats seriously and to potential aggressors that it will not be a helpless victim.