BNS
aA
Lithuanian Minister of Foreign Affairs Linas Linkevičius, currently on a visit to Ukraine, on Thursday met with Russian journalist Arkady Babchenko whose murder has been recently staged. 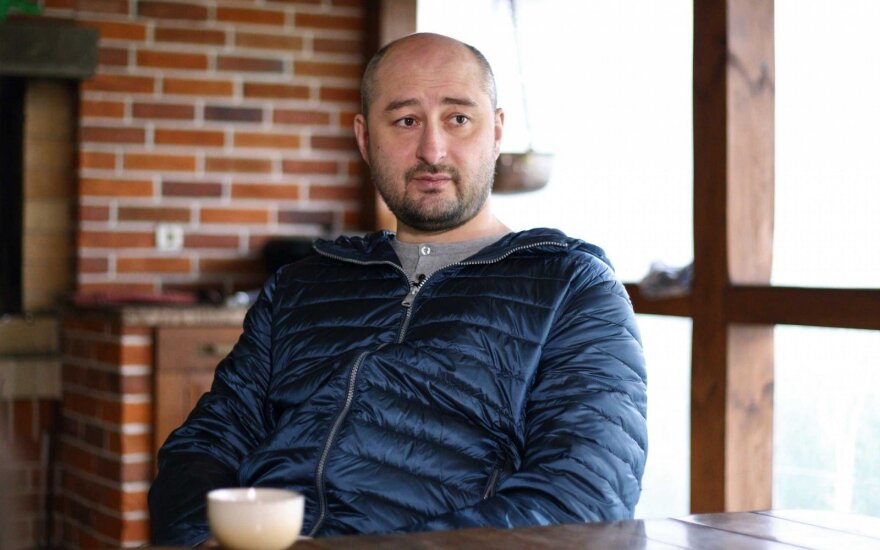 The meting took place three weeks after Ukraine's security services staged the murder of the Kremlin's critic to protect him from real assassination.

"He's now in a very restricted situation and his life is very constrained. As far as I understand, it was the first time he was able to get out, Linkevičius told BNS Lithuania by phone from Kiev. "He seemed very strong to me."

The next day after his supposed murder on May 29, Babchenko appeared alive at a press conference held by Ukraine's security service (SBU). Officials said then the staging was necessary to protect Babchenko and foil Moscow's real assassination plan.

According to Linkevičius, Babchenko has no doubt that Russia was behind the assassination plot.

Calling Ukraine's special services and Babchenko's action an incomprehensible special operation in late May, Linkevičius now refrains from comments: "I just don't want to further discuss it as it’s a transitional situation between the wish to carry out some operative measures and that scope in which all of that took place."

The Lithuanian minister stated the fact that Ukraine is carrying out reforms and is also forced to fight Russian-backed separatists in the east of the country. Ukraine's government forces have been fighting and Moscow-backed separatists since the spring of 2014. The conflict was already taken over 10,000 lives.

Lithuanian Prime Minister Saulius Skvernelis says he finds it hard to understand the motives of...

Lithuanian Foreign Minister Linas Linkevičius says that he does not understand Ukraine's actions in...

Lithuania's Ministry of Foreign Affairs on Wednesday condemned the murder of Russian journalist and...

Lithuania's Ministry of Foreign Affairs on Friday said it had allocated 50,000 euros in humanitarian...

Lithuania's government has allocated 48,200 euros from its reserve to receive schoolchildren...