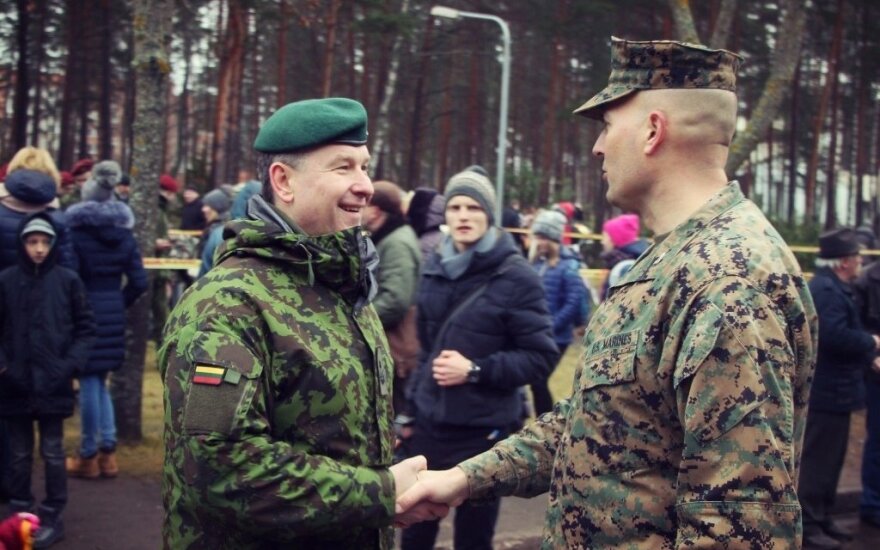 All NATO members are united in an agreement to dedicate 2% of their GDP to defence spending. Lithuania, which has long not upheld this, has finally begun to increase spending. However an economist points out that based on expenses relative to budget size, Lithuania is second after the USA. “You can’t spread GDP on break, similarly to how you won’t buy howitzers because you buy not from the GDP, but from the budget,” chief economist for bank Nordea Žygimantas Mauricas writes on social media TV3.lt reported.

According to his observations, the Lithuanian budget is the smallest in the EU, which means that in 2017 Lithuania’s contribution to its defence budget will be the second largest in NATO relative to its budget. Lithuania will only be exceeded by the USA.

“The difference is that in the USA most of the expenses are for encouraging local economy and innovation (for example how the internet was created), while in Lithuania – not (at least not yet). Thus we shouldn’t overdo it (that is spend more than 2%). 2% of Lithuania’s GDP is 6% of the budget’s total revenue (3.6% for Norway), unless we wish to surpass the USA (11% of total budget revenue) or Russia (25% of total budget revenue),” the economist writes.

National defence – only an example, but funding should be used more effectively
The economist explained to the tv3.lt news portal that national defence was only chosen as an example, other sectors are similarly compared to GDP. This, he stated, is only a theoretical measure and what matters most is how much revenue the budget gathers.

Mauricas stresses that he absolutely does not question the 2% of GDP spending expected of NATO members and points out that the earlier miniscule defence spending below 1% GDP was unfair toward member states that do ensure the agreed funding. At the same time he notes that things should not be taken to excess because even if the figures may appear small compared to GDP share, when you compare the funding to GDP revenue, it no longer appears small at all.

The GDP portrays a state’s economic potential and potential for tax gathering, but reality is better portrayed by budget revenue particularly so in Lithuania. Ž. Mauricas explains that this is because the country has to contend with both rampant black market economy and cash transfers from expatriates, neither of which contributes to tax revenue or only little, while also inflating the country’s GDP
.
In terms of national defence funding, the economist points out that spending could be used more effectively by focusing on spheres that can both contribute to national defence and also provide a boost to other areas. He stresses that while for example US military spending is vast, much military technology has filtered over into the civilian sphere, with military research being the starting point of things ranging from the internet to smartphones. Similarly Lithuania should look into more effective use of defence funding, for ways to receive economic benefit as well by, for example, investing in cyber space or combatting fake news.

The Ministry of National Defence responds to such musings by stating that national defence is not a question of economics, but political choice and that the current geopolitical circumstances demand enhancing defence capacities.

While the ministry’s response agrees that calculations based on the budget have been considered, such an approach would discriminate other countries and that the consensus is that GDP is the fairest way to measure a state’s fair contribution to NATO, irrelevant of the country’s wealth. Calculations based on budget would discriminate states which receive much tax revenue and have a vast public sector, while benefitting states with low taxes or rampant black market economy.
Deputy Director to Vilnius University Institute of International Relations and Political Science, Dr Margarita Šešelgytė also confirms that whatever measure you take, some countries will appear to perform better than others. In the end she stresses that the name of the game is clear – 2% GDP spending is the country’s commitment to the organisation if the country is to expect the organisation to uphold its commitments. Furthermore the expert adds that there is also a NATO directive that 20% of defence spending should be spent on weaponry and technology.

The Ministry of National Defence is intent on reaching the minimum 2% defence spending expected. But from this point M. Šešelgytė notes it is a matter of discussion, whether spending should rise further because there are other spheres that require funding to ensure a safe and stable society. She stresses that while there are claims in support of 5-6% GDP defence spending, but it is questionable whether this would actually enhance security, if foregoing investment in other areas such as healthcare or education, which would cause public discontent.

The Ministry of National Defence informs that the Lithuanian defence budget only began recovering three years ago after vast budget cuts and is only expected to reach the NATO minimum of 2% GDP spending by the end of this year, which will be proof of the country’s commitment to NATO and its NATO allies.

The Defence Ministry's Defence Resource Council on Friday gave a green light to the reform of the...