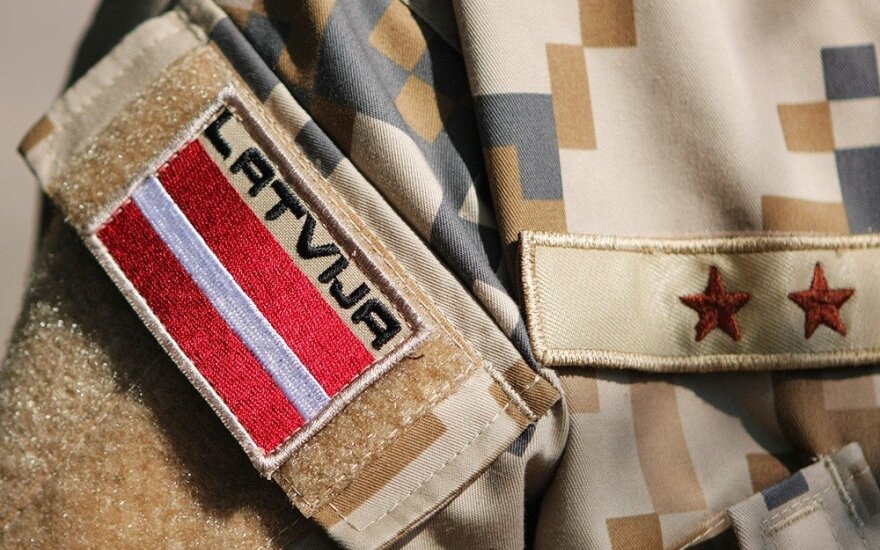 Defence expenditure in Latvia is being increased at a similar rate as in Lithuania, however returning mandatory military service in the country would significantly weaken its professional army and National Guard, Latvian Minister of Defence Raimonds Bergmanis told LRT.lt.

Meanwhile defence analyst Audrius Bačiulis describes this as just being excuses. "In this regard, compared to Lithuania, Latvia looks particularly unexceptional," A. Bačiulis commented.

Latvia is the only of the three Baltic States to not have conscription. Estonia has made use of it for a long time, while Lithuania returned conscription in 2015. 5.3 thousand Lithuanians have completed their mandatory service period since then.

Furthermore, recently there have been talks in Lithuania of establishing universal conscription. Meanwhile Latvia has foregone conscription and transferred to an exclusively professional military starting in January 2017.

Latvian Minister of Defence R. Bergmanis has so far been sceptical of returning conscription to the country. "The Latvian Ministry of Defence is not in favour of returning conscription, but if it were to be done, vast human and financial resources would be needed. Furthermore much time would be needed for the system to become effective," the minister told LRT.lt

According to R. Bergmanis, returning conscription would require organising the full employment process and create new infrastructure across Latvia.

"The maintenance expenses would be vast even if the number of conscripts was limited. For example if a thousand individuals were called for twelve months, this would cost around 104 million euro. The military has to have the capacity to rapidly respond to any threat and the troops must have the necessary skills to use modern military technologies, which cannot be mastered over a short period, thus Latvia has opted for a professional military service," the Latvian politician said.

Meanwhile defence analyst A. Bačiulis is surprised by the Latvians' calculations that mandatory military service would be so expensive.

"The Latvian excuses that supposedly they cannot reconstitute mandatory military service due to the vast expenses required sounds even more disappointing than analogous statements from former Minister of National Defence Juozas Olekas. The 104 million euro sum supposedly required for calling up a thousand conscripts is absurd. The impression is that someone made a mistake at the Latvian Ministry of Defence and added an extra zero to the sum," A. Bačiulis explained.

The defence analyst reminds that based on calculations by specialists from the Lithuanian Ministry of National Defence, the full upkeep of a single conscript costs a little under a thousand euro per month. "The entire reconstitution of mandatory military service, including re-establishing the military conscription service, upkeep for troops and training, based on 2015 values, had to cost Lithuania around 20 million euro. It is necessary to keep in mind that at the time 3.5 thousand individuals were called, that is to say three times more than in the calculations made by the Latvians," A. Bačiulis stated.

According to the expert, it is curious where the Latvians are drawing their military reserve from and will do so in the future if they do not re-establish mandatory service. Supposedly Lithuania took such steps precisely due to noting the lack of sources for reserve troops.

"In 2015 we recreated conscription, at this point we already have a fairly sizeable number of freshly trained reserve troops. The goal is to have a prepared reserve of around 40 thousand. In this regard, compared to Lithuania, Latvia looks particularly unexceptional. Especially so if we consider that based on statements from the Latvian Ministry of Defence, 3748 individuals – almost half of the current number – volunteered since the beginning of Russian aggression. There is no lack of patriots prepared to defend their country in Latvia, but there is a clear lack of political will to allow them to defend it," Bačiulis summarised.

According to the Latvian Minister of Defence R. Bergmanis, after Russian agression in Ukraine in 2014, the ministry and armed forces have focused most of their attention into strengthening the Latvian defence forces and cooperation with NATO.

Lithuania will also be spending 2% GDP on defence starting next year. At the start of this year, the State Defence Council proposed to dedicate 2.06% GDP or 873 million euro to defence, an increase of 150 million compared to this year. Currently Lithuanian national defence spending has reached 1.8% of GDP.

According to the Latvian Minister of Defence, following the Ukrainian crisis, several key decisions were made in developing the Latvian armed forces.

"In September 2014 an intergovernmental agreement was made regarding a mechanisation project which will be completed in 2020 when 123 combat vehicles will arrive in Latvia. The Latvian armed forces have already received 60 of the 123 planned combat vehicles from the UK," R. Bergmanis said.

The vehicles are equipped with Spike anti-tank rockets and modern NATO covert command and communications systems. "The mechanisation project is an important step in establishing core combat capacities for the national armed forces. This is also a long term investment into the security of Latvia, the region and NATO," the Latvian Minister of Defence commented.

Furthermore in order to increase artillery reserves and renew defence capacities, Latvia decided to order 120 mm howitzers from Austria in 2017.

Depending on modifications, each combat vehicle costs from 60 to 140 thousand euro, while the full sum of the contract is 6 million euro. Latvia is purchasing a total of 47 combat vehicles.

"The purchase of 47 howitzers from Austria will increase the firepower of Latvian forces and will allow Latvia to fully participate in NATO operations and training. The first howitzers are to reach Latvia this autumn," R. Bergmanis said.

Furthermore he notes that from the end of 2016, in order to safeguard Latvian airspace, the cutting edge Sentinel radar systems are being used. "The Sentinel radars are a completely new page in strengthening Latvian air defence," R. Bergmanis stated.

Nevertheless according to analyst A. Bačiulis, the decisions made by Latvian politicians in defence are "more reminiscent of imitations of real activity, rather than genuinely taking care of the military."

"It is good to hear that Latvia is planning to spend the 2% GDP commitment for national defence, however the funding must be adequately used. The first question that arises is – if defence spending in Latvia is being raised at the same rates as in Lithuania, why are they lacking the funds to re-establish universal conscription?" A. Bačiulis asks.

He believes that the Latvian decision to arm its land forces with the technically and morally aged British CVR(T) combat vehicles rather surprised defence analysts. "The light reconnaissance armoured fighting vehicles which were designed in the 1960s are currently being phased out or have already been phased out by all countries that ever made use of it.

The Latvian decision to order CVR(T)s was viewed as an extra measure in the face of Russian aggression, based on the idea that it's better to have anything, rather than nothing. However the Latvian decision to modernise these antiques and even arm them with modern anti-tank rockets sounds absurd or even like intentional sabotage," the defence analyst commented.

The expert also notes how it is peculiar to procure the exceptionally large number of self-propelled howitzers, which would theoretically suffice for a whole three artillery battalions. "Most likely of the 47 M109A5 howitzers purchased from Austria, only a fifth or half will be used practically, while the rest will be left as a reserve of spare parts," the analyst calculated.

He points out that the M109A5s are equally morally aged and do not hold up to the standards of the modern battlefield, just the same as the CVR(T) armoured fighting vehicles. "Furthermore there is nothing to be heard of procurements of fire control and supply vehicles, without which adequate combat performance from the artillery battalion is impossible. What is at least good is that the Latvians will always be able to obtain spare parts for their howitzers from the Americans," A. Bačiulis said.

The analyst noted that the decisions of Latvian politicians in terms of defence are more reminiscent to imitations of real activity, rather than genuinely taking care of the military. "It is unfortunate, but this has been happening for a quarter century, right from the recreation of the independent Latvian state. It is painful to see it because the Latvian troops, whose courage and professionalism are well known, deserve more attention from their politicians," A. Bačiulis added.

The Lithuanian State Defense Council will discuss the needs of the national defense system and the...

BALTRON Squadron Exercise 17/2 of the Baltic unit of warships, BALTRON , will take place in...