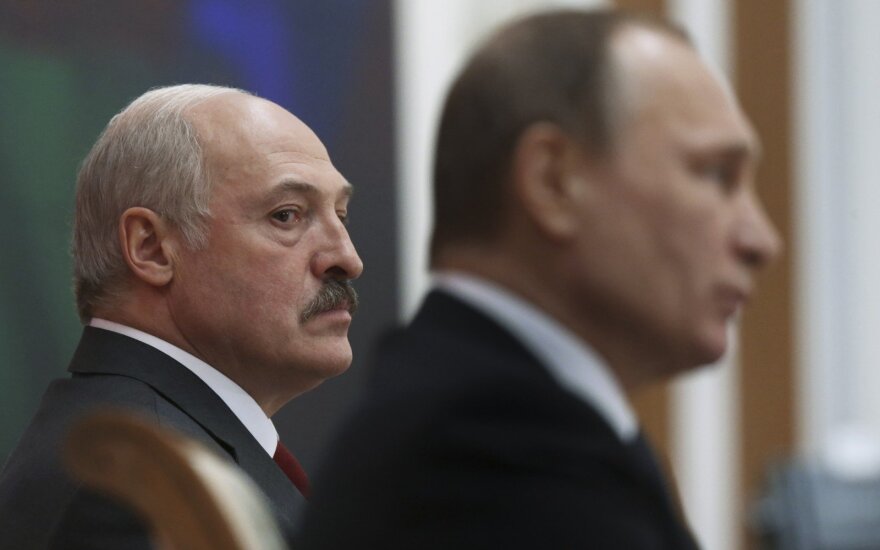 During a Delfi TV conference Lithuanian Minister of Foreign Affairs Linas Linkevičius also mentioned the recently worsened relations between Minsk and Moscow. In his opinion the supporters of an independent direction for Belarus are experiencing a difficult time, meanwhile the Aleksandr Lukashenko regime has ever less time.

After discussions of tension between the two allies – Belarus and Russia – began to proliferate, discussions have surfaced that A. Lukashenko’s regime is even threatened. Supposedly the independent course of A. Lukashenko could be reined in by Moscow even by force through the autumn military exercises Zapad, during which Russian military vehicles and troops will pour into Belarus.

Meanwhile the Belarussian leader, accused of more than half a billion dollars of unpaid debt for gas, has publically criticised various Kremlin initiatives, for example the establishment of a Russian military base in the country Lukashenko has ruled for 23 years now.

During a press conference lasting an entire seven hours A. Lukashenko poured on criticisms toward Moscow and assured he is unafraid of military aggression along the lines of that used by Russia in Ukraine.

While experts have criticised the Belarussian escalation of such a threat scenario, A. Lukashenko’s tone was received just as a generic pose used by the eccentric authoritarian leader to strengthen negotiation positions. The head of Lithuanian diplomacy Linas Linkevičius believes that regardless of circumstance, Minsk has ever less time.

“I am no political scientist, I cannot judge based on premises. I can only observe that Belarus is not a member of NATO or the EU and has no intention of heading that way. But those elements of independence are facing difficult times now, they have ever less time,” Linkevičius, who was criticised by Moscow for refusing to celebrate the Crimean annexation, stated.

The minister reminded that with his unique position, A. Lukashenko also did not celebrate the Crimean occupation and did not recognise it, similarly to avoiding recognising the independence of South Ossetia and Abkhazia – territories ripped away from Georgia by Russia during their war in 2008.

The Crimean transfer to Russia, similarly to that of the aforementioned separatist Georgian territories, failed to receive support from the international community, but a major blow to the Kremlin was specifically the position taken by Minsk – Belarus is identified as a “brotherly” country, united with Russia in alliance. Nevertheless Moscow failed to convince A. Lukashenko to change his mind.

“To dare do so takes an element of independence. But times are fairly difficult. The time to decide has arrived,” L. Linkevičius stated, reminding that Belarussian integration with Russia in the military, intelligence and economic spheres continues to deepen. And unlike Lithuania which has NATO security guarantees, Belarus has ever less reason to speak of its independence.

When asked if closer Lithuanian dialogue with Belarus is possible, Minister Linkevičius noted that while the two countries are not allies, they are neighbours who trade intensively.

“We try to understand one another and in the areas we do not and will not understand, for example Astravyets nuclear power plant we take a stand. But we would like it if they (the Belarussians) would near toward European thinking, cooperation flows and dialogue with the EU,” Linkevičius said, adding that cooperation with Belarus was particularly strengthened during the Lithuanian chairmanship of the EU, after Brussels withdrew a number of sanctions targeting Minsk.

In return a number of political prisoners were released from jails, where opposition members were sent after the 2010 elections, which, international observers noted, were falsified by Minsk and harshly concluded with violence against opposition supporters.

“There no longer were any more political prisoners, that’s is a plus. You can ridicule it and say this means nothing, but I believe that those people who were sent to jail find it meaningful. We wish for those times to not return, that there would be more freedoms for parties and people.

Those who say that it is likely difficult to expect radical reform in Belarus are correct. But what we are doing must be directed toward achieving at least minor advances,” the head of Lithuanian diplomacy stated, noting that while respecting neighbours is important, it is also necessary to notice what fails to adhere to international norms and observe how the situation in Belarus develops.

Zapad 2017 military training to be held in Belarus and Russia this year will be the main...

Referred to by some as "Europe's last dictatorship," Belarus has long had a complicated relationship...

Speaking about changes in Belarus would be self-deceit

An opposition figure has been elected to the Belarusian parliament for the first time in a decade,...

Belarusian President Alexander Lukashenko has said that Lithuania should think of helping his...

Ticking bomb in Astravyets – will it blow us up or the Belarussian economy?

Change in the air in Belarus (1)

The evolving political dynamics of Belarus are causing an unprecedented shift in policy stances and...