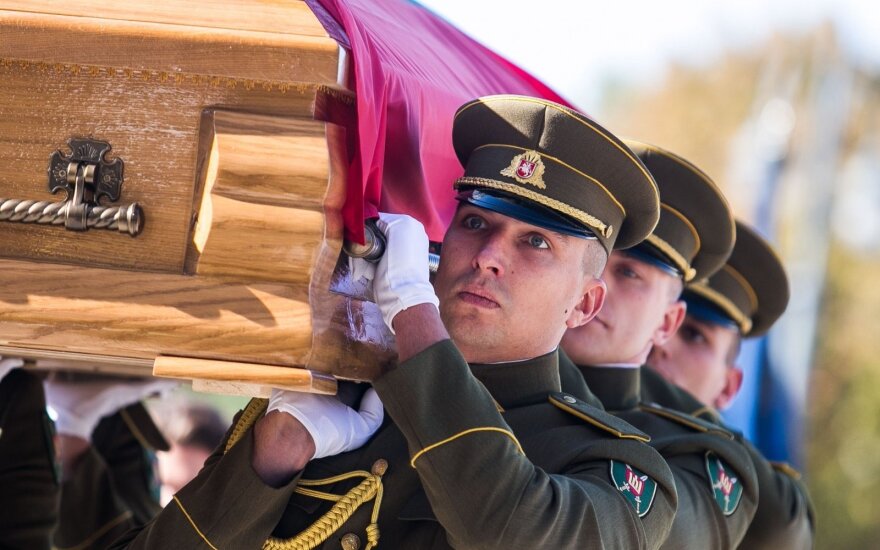 The post-war armed resistance hero, whose remains had been found and identified earlier this year, were buried in the pantheon of the state's leaders at Vilnius' Antakalnis Cemetery.

The partisan commander's flag-draped coffin was escorted to his final resting place by the country's leaders, soldiers and thousands of ordinary people.

"This individual was so dangerous to the system, so important, that it was necessary not only to destroy him and his family, but also to conceal his identity. But they failed," Lithuanian President Dalia Grybauskaitė said at the ceremony.

Chief of Defense Lieutenant General Jonas Vytautas Žukas underlined that Ramanauskas-Vanagas had managed to combine the qualities of a teacher and a military officer, strictly adhered to military discipline and actively contributed to the underground press.

Vilnius Archbishop Gintaras Grušas called it a day of joy and justice as he celebrated Holy Mass in Vilnius Cathedral.

"Funeral is rarely a joyful day, but it is today. It is a joy because justice is being restored and debt is being repaid. A joy because we are free and dignified to pay respect to our heroes. A joy because the roots of our nation's tree have survived and are sending up shoots," he said at the cathedral.

The archbishop said paying due respect to the freedom fighter meant restoring justice to the victims of Soviet repression.

"At this hour, justice is being restored not only to Vanagas, but also to all brothers and sisters whose desecrated bodies were laid out in the squares of our townships, to all those the whereabouts of whose graves are still unknown, all those who died in prisons, camps and across the vast expanse of Siberia," he said.

Ramanauskas' daughter Auksutė Skokauskienė said she was happy that her father had been finally buried in a grave she can visit, adding that she hoped it would become a symbol of all freedom fighters.

"I'll now have his grave, a sanctified place I'll be able to visit whenever I want to be with him," the woman told LRT TV.

"Lithuania is free, Lithuania remembers him and will have his grave. It's a symbol of all those who fought for Lithuanian freedom. After all, there are so many unknown graves left," she added.

Ramanauskas-Vanagas, the commander of the Dzukija partisan region in southern Lithuania, was among the partisan leaders who signed the Union of Lithuanian Freedom Fighters' Declaration in 1949. He was appointed commander-in-chief of Lithuania's defense forces in the same year.

After several years in hiding, Ramanauskas-Vanagas was arrested and brutally tortured by the Soviets in 1956 and executed a year later.

Prime Minister Saulius Skvernelis said the state funeral for Ramanauskas-Vanagas was "the restoration of historical justice".

"I think it's a day of victory for our nation, for our freedom fighters, because the man will be given a proper burial, marking the meaningful struggle of our partisans, which ultimately achieved its goal.

The armed resistance lasted until 1953. Partisans' goal was achieved when Lithuania regained independence in 1990.

The guerilla war that started in Lithuania at the end of the second World War Two was the state's...