Kristina Pocytė
Parašyti
autoriui
aA
On Sunday night, the mayors of all sixty municipalities were revealed: a third of them were elected during the first round, with the rest in the second round. Of the sixty mayors, more than half were re-elected for another term. 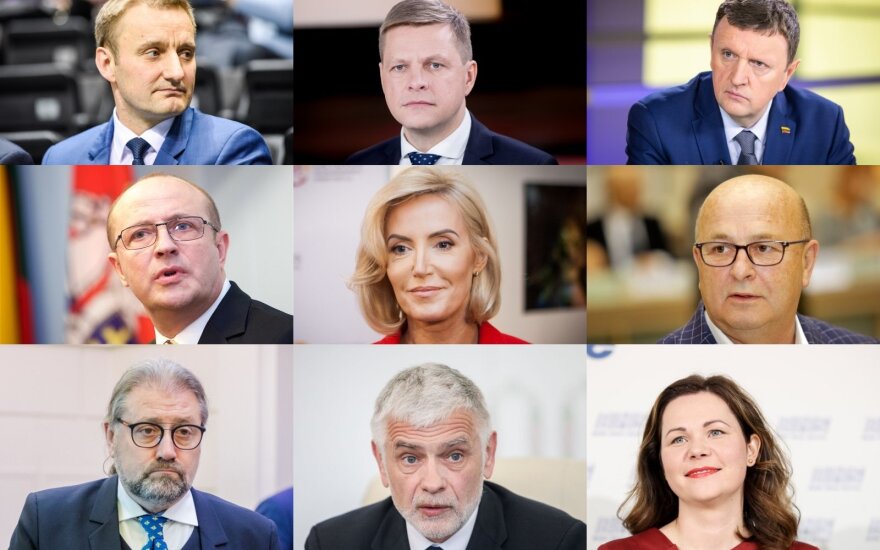 In Vilnius, Remigijus Šimašius could celebrate victory only three hours after the polls closed. He will remain in office for a second term. And while Artūras Zuokas said at the start of vote countring that he will only evaluate results at the very end, he admitted his loss before the count was completed.

Klaipėda city Mayor Vytautas Grubliauskas won another term in office as well. That said, his Liberal Movement colleagues did not support his bid and delegated Simonas Gentvilas, leading V. Grubliauskas running for office with an electoral committee.

Related articles
Kubilius: you have to look deeper
Vilpišauskas on municipal elections: personalities won the day

In Kaunas, Visvaldas Matijošaitis will remain in office for another term following a first round victory. He received an entire 79% of the vote.

R. Račkauskas was unsurprised by P. Urbšys and the Conseravtives' cooperation, describing it as disposable and revealing a desperate bid to enter power.

Nevertheless, R. M. Račkauskas celebrated victory in the second round, all the while having recused himself from the office of mayor currently.

The office of Lazdijai Mayor was won by Lithuanian Farmer and Greens Union (LVŽS) candidate Ausma Miškinienė, who has been presented as a trustee by Prime Minister Saulius Skvernelis in his presidential bid.

The Lithuanian Social Democrat Party (LSDP) won ten mayor posts in the second round. Its chairman Gintautas Paluckas says that expectations were amply fulfilled. "We are satisfied with the results. It would appear that we have the same number of mayors as in 2015. I will not hide that this was somewhat beyond expectations. We acted under a very difficult competitive environment – both committees and parties sought to win. I am truly proud of our structure, our branches and our candidates, who surmounted all this pressure," G. Paluckas said.

After the second round, it emerged that "Farmer" MP Bronius Markauskas will head the Klaipėda region. He unseated long time municipality head Vaclovas Dačkauskas of the Social Democrats, who held the office of mayor since 2003.

In Ignalina, the "Farmers" suffered a painful blow. Ramūnas Karbauskis, visiting a Delfi show, assured that the loss in Ignalina was decided throughout the campaign due to, as he describes it, lies that the "Farmers" would close all hospitals.

R. Šimašius to remain as mayor in Vilnius for another term

Vilnius residents had to choose between R. Šimašius and A. Zuokas in the second round of elections. R. Šimašius jumped to the lead at the very start of vote counting and continued to build a lead, albeit A. Zuokas assured for a time that the results could change.

"My communication was not acute, I tried to direct the discussion toward acute matters so that it would not just be empty words, but documents. I hoped to win. I wish to say I am thankful to voters. Regardless of whether we will be in the opposition, we will seek to meet expectations," A. Zuokas said.

"I expected such support and wish to thank all those, who supported me, who believe in a free and creative city. I hoped for it, but I was not calm, but what I saw in Vilnius residents, in those values, which I declared, they matched. I am proud of this," R. Šimašius said on a Delfi broadcast following his victory.

He also paid homage to his rival. "You know, it was a strong opponent, I had to learn much and try hard, but it's not up to rivals. Whatever exchanges would occur, people vote for what will be. I do not believe that the people voted against something, people voted for the future. It is very important whether you can believe in promises," the newly re-elected mayor said.

Klaipėda mayor Vytautas Grubliauskas went up against a "Farmer" candidate and now remains for another term.

V. Grubliauskas entered the elections with an electoral committee he assembled after the Liberal Movement elected Eugenijus Gentvilas' son Simonas as its representative in the city mayor race.

"I daresay that within me they [voters] saw a certain guarantee of stability, one that was not surrounded in promises, which I believe that the residents can separate from reality," V. Grubliauskas told BNS on Sunday evening.

Kaunas residents elected their mayor in the first round, granting Visvaldas Matijošaitis a near undisputed second term.

Not only V. Matijošaitis, but also his entire team were trusted to continue work. Of 40 city council members, 32 are of V. Matijošaitis' organisation United Kaunas, with the remaining 8 mandates going to the Conservatives. Other parties and committees were unable to enter the municipal council.

The council features an entire three from the Matijošaitis family Visvaldas himself alongside two of his sons. Kaunas public figure and legendary trainer Jūratė Elena Norvaišienė will continue working on the council, as will Jonas Audėjaitis – the head of the Vilnius Art Academy Kaunas Department. A number of other council members will continue their tenures.

Panevėžys Mayor Rytis Mykolas Račkauskas has been successful in his re-election bid. He led in the first round as well.

While the city's residents chose to re-elect R. M. Račkauskas, he is currently removed from office pending a corruption investigation.

Šiauliai residents elected their mayor in the first round, granting incumbent Artūras Visockas a second term. His team will also comprise most of the city's council.

A. Visockas' committee Artūras Visockas' list We Work for the City obtained 15 mandates, followed by the LVŽS, TS-LKD and civic electoral committee Valerijaus Simulik's movement For Šiauliai with 3 each and the LSDP, Labour Party and Liberal Movement taking 2 each.

In Šiauliai city council we will also see the head of the State Šiauliai Drama Theatre Aurimas Žvinis, who performed the role of Pijus in the TV show Naisių Vasara and ran for city mayor under the LVŽS flag. That said, he only won a little over 7% of the vote.

N. Cesiulis was the first to declare his candidacy for city mayor. He has been working on the city council for twelve years now.

By the way, the politician was awarded "for negatively advertising the city" in May 2017. The Lithuanian Journalist Union Alytus branch decided that N. Cesiulis was worthy of this title because in 2016, prior to the summer season, Alytus' name was heard across the country as the city where sunbathing was banned.

That said, such a prohibition was not made at N. Cesiulis' initiative, quite the contrary – he was the one to notice such a peculiarity in the city orderliness and cleaning regulations, even though only nude individuals were banned from sunbathing. In consideration of criticism from the councilman, this peculiarity was fixed, however Alytus came to be known as the city where sunbathing was banned.

Ignalina mayor does not retain his position

The office of Ignalina mayor will be going to LSDP candidate Justas Rasikas, who will replace LVŽS candidate Henrikas Šiaudinis in the position. I. Rasikas is a sales specialist at Ignalina Nuclear Power Plant.

The office of mayor in Lazdijai goes to LVŽS candidate Ausma Miškinienė.

She was recently presented as a trustee by S. Skvernelis in his bid for presidency. He did not specify her specific position, only presenting her as part of three female trustees he introduced.

A. Miškinienė is currently a vice minister of agriculture.