Lightning keeps striking all year, will the villager start crossing himself? 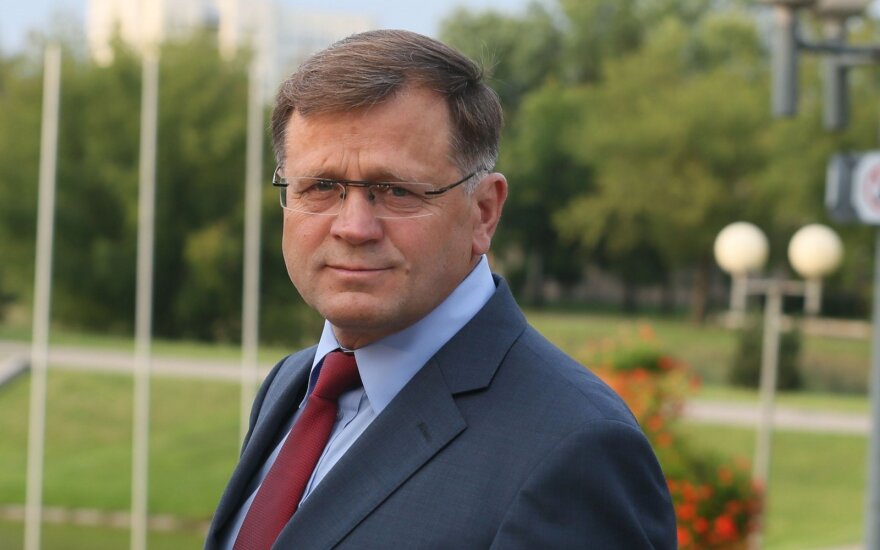 I wish to immediately admit: the past year after the Seimas elections are still not enough time to strictly evaluate the majority's work. However I am afraid that this time we may have a unique case – the fools in power are increasingly interested in their own welfare.

I agree that the legislation that the impact of currently passed legislation can only become visible in a few years.

However the trends which decide certain decisions, alongside the political background, are very important. Thus let us have a look at the majority's budget project for next year.

In late July this year, Seimas Speaker Viktoras Pranckietis announced in the media that the time of unpopular decisions is over and in autumn we will be met with many actions by the majority which will be liked by most.

You can twist those words all you want, but this means two things – reform is over, now we begin preparing for the next Seimas elections and don't try to remind us what expectations we sowed on the way to power.

But we should. Especially now when the 2018 state budget project has been presented and it is not yet clear what majority will be passing it. Autumn come, just like the Seimas speaker said, the majority definitely did present voters with surprises, while also going after one another's throats to the point where it is unclear whether the majority is in power or in the opposition.

Just listen to current Prime Minister S. Skvernelis talk when confirming this year's budget almost a year ago. You would be deafened by statements that there is desire to fundamentally reform the tax system by merging taxes, that there is need for major changes in state owned companies and state service, that there are wishes to help those living in poverty, to stop emigration, but nothing can be done because it was not his team that prepared the budget project.

A year passes and what do we have? Already in spring the Seimas charged the cabinet to form a workgroup, invite scientists into it and research why people are emigrating from Lithuania. As if it isn't clear for someone yet.

And here I thought that the Lithuanian Farmer and Greens Union, having performed public opinion surveys before the elections, a sort of request concert and later handing out pledges had already found the roots of emigration? It would appear I was mistaken. Even now this workgroup has not answered why people emigrate, hence we remain unsure, while the emigration rates do not decrease.

Tax reform? A year has passed and Prime Minister S. Skvernelis' hands are now untied. What changes is he proposing? Not even worth talking about it because nothing is left of "Farmer" tax policy guru Stasys Jakeliūnas' proposals to merge some taxes, abolish certain pension funds and then drastically raise pensions.

Oh, I remember, the reform is planned – farmers will be allowed to write off their land into business expenses every year. What does this mean? It means that even with certain tax exemptions being removed for farmers, they will be able to easily write off their profits into expenses and the impoverished will see no solidarity.

Furthermore the Seimas farmers tried to push through statute changes which would allow them to work and receive income from agricultural work. Well, this is like allowing a mason elected into Seimas to continue working with masonry and a policeman continue catching speeding drivers.

During the Seimas electoral campaign S. Skvernelis and Ramūnas Karbauskis promised to fire half the state service. Wow! Who wouldn't vote for such promises! However back then they did not reveal the second part.

Currently the head of cabinet says that yes, only 20 thousand civil servants will remain of the current 52 thousand and those fired will be employed in the same places, just based on a work contract. Since legislation contains now alternative, when firing those hired based on one contract and taking them back with another, the former civil servants will have to be paid massive severance pay.

The state will have to spend a further 100 thousand euro for the intended larger wages and payments after rewriting the work contracts. That's all for the reform. And this is after the Seimas majority and Prime Minister Saulius Skvernelis' hands are free to act.

I won't hide it – I thought that those intentions to accomplish reform would come true. Higher untaxed income size or several euros in pensions increases, various grants for those in poverty sometimes cost even more.

This is what Maisto Bankas [Food Bank] Panevėžys region representative Asta Čeponienė had to say: "The minimum wage and pensions rose, but due to this the lives of some people have gotten even worse.

If a person's income is less than 204 euro, they can expect a compensation and support, but if they exceed this by only a few euro, they receive nothing. They are officially removed from the supported individuals' ranks, but are still forced to ask for aid. And they are becoming more numerous."

And it isn't just the angry opposition that says this, not those individuals who oppose reform and sobriety and stalk the "Farmers" with drones or are hired by greedy businessmen.

Let us add on those who were forced out of their social housing because their income exceeded the allowed limit by a little over ten euro and will increase even further next year.

This does not mean that we should not take care of those in poverty, but it means that we must do this while using both hemispheres of the brain and first make sure that while curing the hand we do not decapitate.

What R. Karbauskis is saying about the euro's adoption being to blame for price rises is untrue. I see this as an attempt to divert people's attention from reasons which were caused by natural processes and the current majority's decisions.

Such and similar lies appear when you seek only popular decisions, but are afraid of accountability while preparing for the next Seimas elections and no longer thing about the consequences of such thoughts. All the majority's economic reforms were intended to put out a fire, sprinkle here, sprinkle there, but time was not found for the creation of a long term stable economy.

Most of the reforms which the "Farmers" have long had to conclude are swamped. The university network reform ended with what we could have guessed and what the opposition spoke of – the rectors organise secret meetings, negotiate who should merge with who, those meetings are spiced up by compromising material on a certain rector, he drops out of the picture and his university is now being split up by others.

The Seimas majority has currently not dared say who should merge with who, thus even next year future students will know where they entered to study, but it will not be clear what university they will finish.

It is clear that the Seimas majority has already buried the reforms the state needs and the farmers are openly concerned with avoiding taxes. If the so-called Farmer Greens propose and establish rules themselves which allow to build animal and poultry farms increasingly close to residential homes, various boiler houses without environmental reviews, then it would appear that this company continues to be inclined to hide its aims and ideologies and will perhaps await a convenient moment when it will remove its mask and present itself.

It would be difficult to balance a budget whose project was prepared by the now unhampered by enemies cabinet of S. Skvernelis, which also no longer contains any of the electoral pledges.

Even the campaign pledge stated everywhere to not cooperate with the controversial Polish and Russian union leader Waldemar Tomaszewski and other suspect parties is no longer a value to the Farmer and Greens Union.

This bouquet of "values" could also be beautified by a parliamentary investigation during which it would be answered who pushed a proposition to ban the sale of agricultural land to foreigners several years ago and whose farms intensively bought land when the prices fell. I have no doubt that the names of certain current members of Seimas and those buyers would match.

I know a woman who was forced to sell her agricultural land when its prices had fallen because she had an oncological disease and needed money.

Relatives told her to wait and not sell. However the requirement to first offer neighbours and only then others and "others" couldn't buy due to various limitations anyway and furthermore the neighbour used laws and played his games. This finally crushed the woman – she lost half the money.

It would turn out that the time limit for the Farmer and Greens Union to perform reforms ended early. Incredible? Yes, but what is also incredible is that over half a year this political power has shed half its supporters – that's a record.

Now we have to wait for the villager to begin crossing himself. Otherwise some Farmer and Green will come to his hut to take his last coat or buy up land for cheap. And how else do we reduce social segregation?

Lithuania's Parliamentary Speaker Viktoras Pranckietis does not rule out that the ruling Lithuanian...

Lithuania must save for future amid growing economy - Minister of Finance

Lithuania formed a surplus 2018 state budget for the first time since regaining independence in...