the Lithuania Tribune, DELFI
The Liberal Movement are securely the second-most popular party in Lithuania after the Social Democrats, according to opinion polls, but despite their good ratings there are reasons for unease for the party in the run up to this year’s elections. 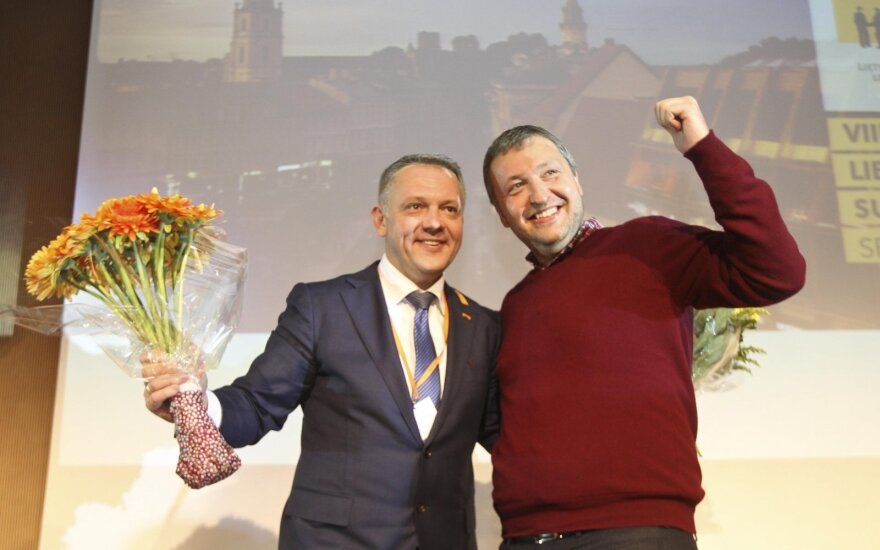 There are a number of reasons for discomfort. The Liberals have few truly well-known candidates in single-mandate electoral districts, so they've had to call on well-known political veterans like Kęstutis Glaveckas and Eugenijus Gentvilas.

European Parliament member Antanas Guoga's ambiguous situation has also made things difficult for the party. Guoga has both Lithuanian and Australian citizenships, so, according to Lithuanian law, he cannot participate in the Seimas elections, or in the government's activities if the elections were to go well for the liberals. Guoga has pledged to sacrifice his Australian passport to secure his political future, but he may not manage in time run for the Seimas.

Guoga's influence on the Liberal Union's popularity is debatable, but he is one of the party's most popular members, after its chairman, Eligijus Masiulis, and Remigijus Šimašius, the mayor of Vilnius.

The levels of support for the party in Lithuania's regions should also make the liberals uneasy. It's no secret that the party is primarily supported by high earners and younger city residents, but they'll need a wider support base to secure a victory or even a strong second place.

The party's current poll numbers don't look bad. According to a Spinter Tyrimai public opinion survey ordered by Delfi in December, if the Seimas elections were to occur right now, 13.5% of those surveyed would vote for the Liberal Movement. 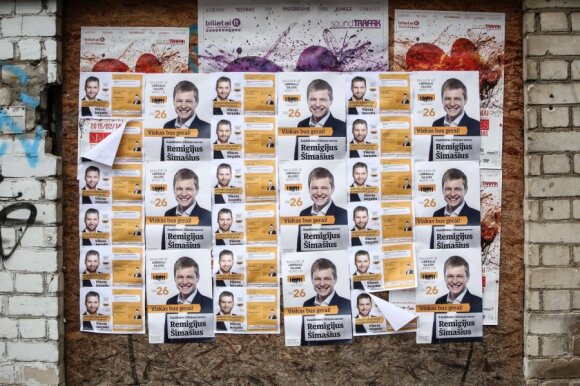 Another poll in December conducted by Vilmorus put the Liberals lower at 9.8%, but the differences could have arisen from margins of error and because the market analysis company included older respondents, who were over the age of 75, in its survey.

The Liberal Movement's approval ratings are also relatively good. When asked to evaluate the liberals on a scale from 1 to 10, only a quarter of respondents gave them scores from 1-3, with the majority giving them scores between 4 and 7. Overall the party’s approval ratings fall short of that of the Social Democrats, but are still very strong.

At least one fourth of those surveyed indicated that they might vote for the Liberal Movement when presented with a choice between several parties. These results show that the liberals could easily become voters' second choice, even among voters who don't regularly support them. And this is where there is real potential for the party to make gains – all that's left is for the party to take advantage of that opportunity.

“The rise of the liberals' popularity was rapid, and it could be associated with the effect of their victory in the municipal elections. However, the rise was too quick to form a stable base group of voters. These were people who had arrived as a wave, so in the long term, the party’s popularity may go up or down,” said Mažvydas Jastramskis, a professor at Vilnius University's Institute of International Relations and Political Science.

In one way or another, the party intends to field as many candidates as it can nationally, however, if the conservatives are moving on to the next generation by replacing long-time veteran single-mandate candidates, the liberals are still reliant on the old guard going into the elections: both Gentvilas and Glaveckas, two Liberal veterans, will run in single-mandate elections.

This lack of fresh candidates may do the most damage in Kaunas, where there is an opportunity for significant gains. Kaunas has long been considered a conservative stronghold, but the Homeland Union-Lithuanian Christian Democrats party decided to change their stale composition by raising new, younger candidates who aren't as experienced or as sold. 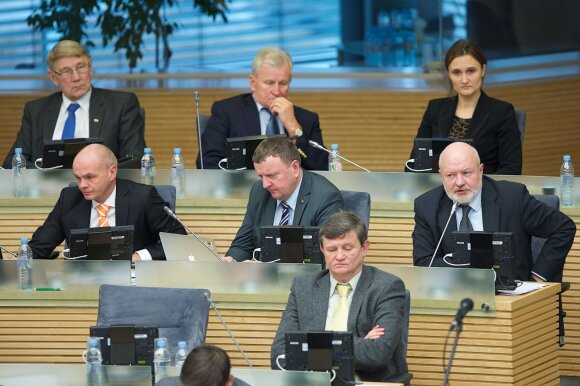 There are at least two districts where two conservative candidates could end up running against each other as veteran conservatives refuse to step aside to allow younger candidates to stand, and run anyway in the elections independently.

This is leading to the possibility of a split in the Conservative party vote which would be very advantageous to third-party candidates. Naglis Puteikis, and the new party he is standing for – Increase Tax-exempt Income – plan to take advantage of these divisions. However, the situation could also give Liberal Movement candidates a boost, although sources in the party were not convinced.

“I'm afraid that defeating the conservatives in Kaunas may not be that easy. We don't have those candidates,” said one liberal.

“Take a look at our history of results and you'll see that we never won that many single mandates. Leftist candidates can still win, however, so our goal is to slice off a larger portion for ourselves from the right's share of the vote,” one politician said.

The Liberal Movement has confirmed only a small number of its single-mandate candidates, but only a few of the names listed appear to show promise.

Party chair Eligijus Masiulis, parliamentarian Vitalijus Gailius, Gintaras Steponavičius, athlete Žydrūnas Savickas, Gentvilas and Glaveckas are some of the more well-known single-mandate candidates that the Liberal Union has mentioned. Glaveckas had previously declined to run for a single-mandate due to health concerns, but has said he will return to the fight this time around.

The liberals are also holding the door open for former minister of culture Arūnas Gelūnas and political commentator Rimvydas Valatka to possibly run.

Donatas Večerskis, a member of Visvaldas Matijošaitis' Unified Kaunas party, will run under the Liberal Movement's banner. Matijošaitis, for his part, may be of help to the liberals in the second round – after the municipal elections, he is targeting conservatives and pushing his support to opposing candidates.

Masiulis emphasized that even single-mandate candidates that have won several elections in cities for other parties can still be dislodged, as they do not have the opportunity to consistently communicate with their voters. The situation is different in regions, where there are opportunities to attack the districts' elected Seimas members at various events and celebrations.

“We aren't sure about some districts, and some of them we will work to reinforce right up to the end of May,” said Masiulis.

The party has had polls conducted in Klaipėda and Panevėžys to ascertain which of their candidates would best suit the districts, he said.

Jastramskis said the success of the party's candidates in single-mandate districts, one way or the other, will depend on the party's overall popularity, and he believes that the party’s general prospects aren’t too bad – especially with conservatives changing candidates in a number of constituencies.

“The Liberal Movement is much younger than the conservatives or Social Democrats, so they also lag far behind the Homeland Union and the Social Democrats as far as party member numbers go. Others say that the quantity of those voters doesn't do much, but it's a fact that there's a better chance to find good single-mandate candidates in a party with 20,000 candidates than there is in a party with 6,000,” said the political scientist.

Guoga will relinquish his Australian citizenship, but it may be too late

MEP Antanas Guoga, one of the Liberal Movement's most famous faces, has been caught in an unfortunate situation. He had planned to challenge Social Democrat chairman and Prime Minister Algirdas Butkevičius in the Vilkaviškis single-mandate district, but his plan may fail because he is a citizen of both Lithuania and Australia. 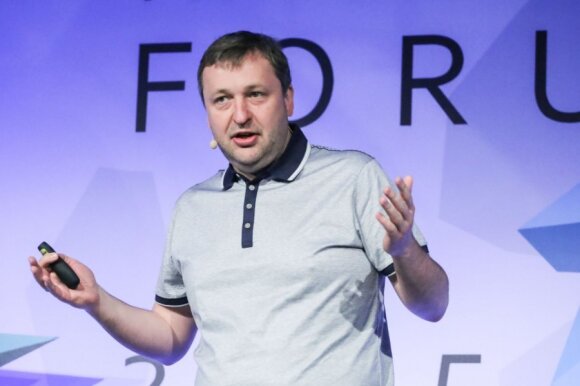 According to Lithuanian law and a decision made by the Constitutional Court in 1998, a person who has pledged allegiance to another country cannot become a minister or a member of the Seimas.

Guoga has told Delfi that he intends to relinquish his Australian passport because he wants to participate in Lithuanian politics, but he may simply not have enough time.

“Yes, my goal is to do something in Lithuania, for a growing Lithuania. I am not attached to that passport in any way, but it's a question of time: there's no way I can do it in time,” said Guoga.

The main problem is that Guoga may not finish the procedures for relinquishing his Australian citizenship until the end of the candidate registration period, and candidates must complete their electoral registration at least 185 days before the elections.

The Seimas and a group of Seimas members have looked to the Constitutional court to address the issue, but the court returned their request and asked them to supplement it. However, the Seimas is not currently meeting and cannot accept a new resolution. The same group of Seimas members can supplement the request, but the group's request, unlike one from the entire Seimas, will not receive the court's priority attention.

Guoga said he would manage to relinquish his citizenship before the election, but not until the end of the candidate registration period. If he completed the process in time, Guoga would be able to run for a cabinet position if the Liberal Movement does well in the elections. It is well-known that, given the opportunity, the liberals would nominate Guoga as Minister of Economy.

When asked to evaluate the influence that Guoga's non-participation would have on the Liberal Movement, Jastramskis said that the situation certainly wouldn't be an advantage, though it's hard to say just how many votes Guoga brought to the party during the municipal elections or during the European Parliament elections.

“It's not like he's the only one. The party has other well-known faces that people value, like its chairman, Masiulis. But yes, [Guoga] is a visible figure, an additional factor that has contributed to the liberals' rise,” said the political scientist.

However, Jastramskis also believes that the liberals could also think a little differently and do things differently: for example, by including Guoga in the election campaign to leverage his popularity even if he won't be able to directly participate in the elections.

A new political party has been established in Lithuania ahead of general elections in October. In...