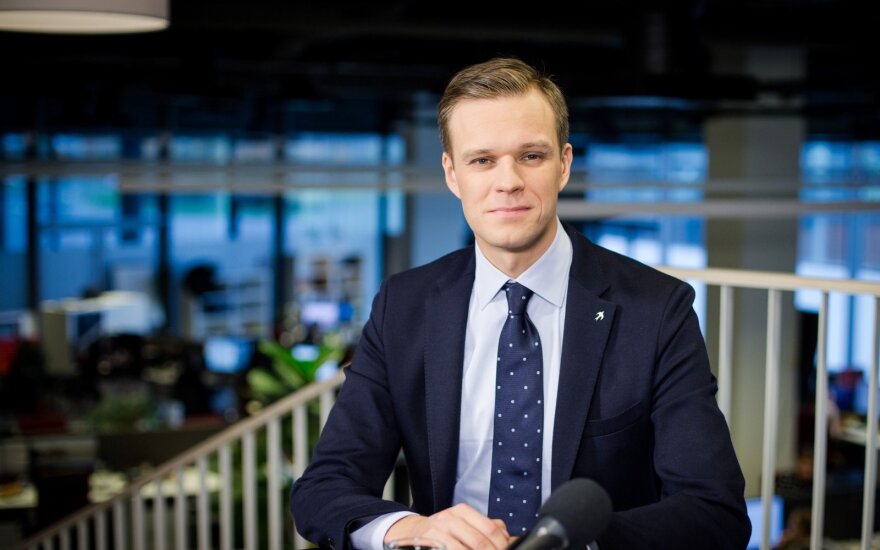 The Homeland Union – Lithuanian Christian Democrats, preparing for chairman elections next weekend, are known for not only the “celebration of democracy”, but also for the genre of epistolary campaigning, where politicians release public letters in an effort to impact their fellow member’s votes.

Last week a letter by party patriarch Vytautas Landsbergis was released, where he stated that without his grandson Gabrielius Landsbergis’ leadership the party would be left an inadequate, tried mixture.

Related articles
Pavilionis – Trump is showing us good example in something
Atmosphere in TS-LKD heats up – whose chances to win chairman are the greatest?

In total four candidates are running for the officer of chairman – G. Landsbergis, P. Saudargas, Ž. Pavilions and Mykolas Majauskas. The first round of elections will be held on February 11-12.
Liberals dreaming of G. Landsbergis being replaced?

In his letter A. Navickas wrote that thanks to the efforts of G. Landsbergis and his team it was possible to reach a breakthrough on social media, furthermore the youth vote for the Conservatives was the strongest ever.

“Those of you who think that it is an accidental fortune, I urge you to participate in at least one of our party chairman’s meetings with youth and you will see their enthusiasm,” Navickas explains.
G. Landsbergis’ aide states that one of the reasons the Liberals are angry at the Conservatives is that the Liberals planned for youth to become the foundation of the Liberal Movement.

Furthermore A. Navickas also questions, what exactly are real liberals? He views those liberals who believe that “only material things are important, spite nationality, propagate consumerism and competition in all areas of life, do not understand the role of the family and communities in the life of a state, serve the alcohol production industry or some other corporation” negatively.

It is clear that it is a nod toward the Liberal Movement, whose former Chairman Eligijus Masiulis is suspected of illegal profiteering, selling influence and taking bribes from MG Baltic vice President Raimondas Kurlianskis.

“Such “liberals” are a “virus”, one that needs to be consistently and firmly fought,” Navickas said.
G. Landsbergis’ aide also opposes claims that the current party chairman is similar to the Liberals in his speeches and public rhetoric.

“It is unfortunate, but in recent years we are yielding to the provocation to claim that those party members who believe that a strong country needs attention to favourable business conditions, that infrastructure needs to be modernised, that particular attention needs to be dedicated to fundamental education reform, that we have to aid families through specific political means, not just value based slogans, they have also begun being called “liberals”,” A. Navickas noted with regret.
“If that is how we understand liberalism, then such liberalism is only beneficial to our party,” G. Landsbergis’ aide said.

He also expressed dissatisfaction with politicians who have never run in a single mandate district outside the capital, but speak of turning to the regions. A. Navickas admits that it is partially correct, but notes that such a gesture looks like a fostering of the party branches dissatisfaction with the “centre”.

“We have a chairman who obtained more priority votes during the elections that all of his competitors added together. So let us not try reinventing the bicycle,” Navickas summarised.
First round votes only due to E. Masiulis?

A. Navickas’ letter has angered Christian Democrat union Chairman V. Stundys, who declared that G. Landsbergis’ aide is misguiding the public. He called A. Navickas’ letter one-sided and biased, supposedly claiming that only he is correct.

V. Stundys says that he has had enough of the trend for any discussion on party problems being silenced by voices because it supposedly harms party cohesions.

“Here A. Navickas also tells fellow members how wrong they are, talking about growing liberalism in the party. I have no doubt that he understands that this problem is linked not with all party members, but with the current chairman’s public statements on the protection of unborn life, on family, on partnership and the social security of those working,” the politician said.

According to Stundys, A. Navickas is intentionally misguiding everyone by calling those who seek to improve business conditions, modernise infrastructure and reform education as liberals. The politician notes that this is not opposed by any candidate to party chairmanship. V. Stundys explains that A. Navickas applies the contrasts artificially – for example he does not understand why the call to turn to the regions is linked with encouraging dissatisfaction with the “centre”.

The politician states that the so called antagonisms are deepened by V. Landsbergis’ aide himself, encouraging to “beat” those who hold different opinions.

The Christian Democrat union chairman points out that the letter by G. Landsbergis’ aide perfectly reflects the party’s liberalisation, while countering the notion of strong first round performance with a single argument – if not for the Liberal Movement’s corruption scandals, the Conservatives would have never seen this many votes in the first round.

In the first round the Conservatives gathered 276 thousand votes, thus earning 20 mandates and coming first. Unfortunately in the second round significantly fewer mandates were won, thus the elections were finally won by the Peasant and Greens Union.

“Seeing no other choice in the right, a number of people voted for our party,” V. Stundys said.
The politician also mentions the TS-LKD Chairman G. Landsbergis’ proposal to shorten the party name to Tėvynės Sąjunga [Homeland Union]. “Go figure, it is the name that is to blame that there is competition of ideas and perceptions in the party, rather have just TS and that’s it, you’ll have unity and green harmony – the current name is an obstruction to party renewal and transparency,” V. Stundys quipped.

According to him, the party’s values are established in its fundamental documents – its statute and programme. “This is where the foundation of our strength and unity lie, not an individual’s personal opinion or demands,” Stundys concluded.

A. Navickas – we spoke much, but did little

A. Navickas chose to respond to V. Stundys’ letter, claiming that if he were to write his letter again, he would be even harsher. G. Landsbergis’ aide was incensed that aparently P. Saudargas and Ž. Pavilionis chose the path of aggressive criticism of G. Landsbergis. He notes that he has not observed that the two politicians would criticise the Peasant and Greens Union of Ramūnas Karbauskis to the same extent as G. Landsbergis.

He also returned to the points of contention, for example accusations of “liberalism”. According to Navickas Germany recovered after World War II because it did not yield to socialist daydreams and implemented a social market economy and trusted in its citizens’ entrepreneurship. “In contemporary Lithuania, Christians who implemented reforms in Germany would, no doubt, be accused of liberalism,” A. Navickas explains.

The politician explains that he agrees that life has to be protected from the moment of conception and that a strong family is the basis of a healthy country, but he notes he is discontent that problems are attempted to be solved through declarations, forgetting that in the real world it is necessary to keep in mind other positions as well.

“We spoke so much on aid to families, however we did very little for families to feel real state support, that we would have an effective system of children’s protection from violence, so that there would be no more need for orphanages and adoption services,” Navickas explained.

“Do I agree with everything claimed by G. Landsbergis? No. There are numerous questions where I hold a different opinion. However I trust our leader,” the politician said.