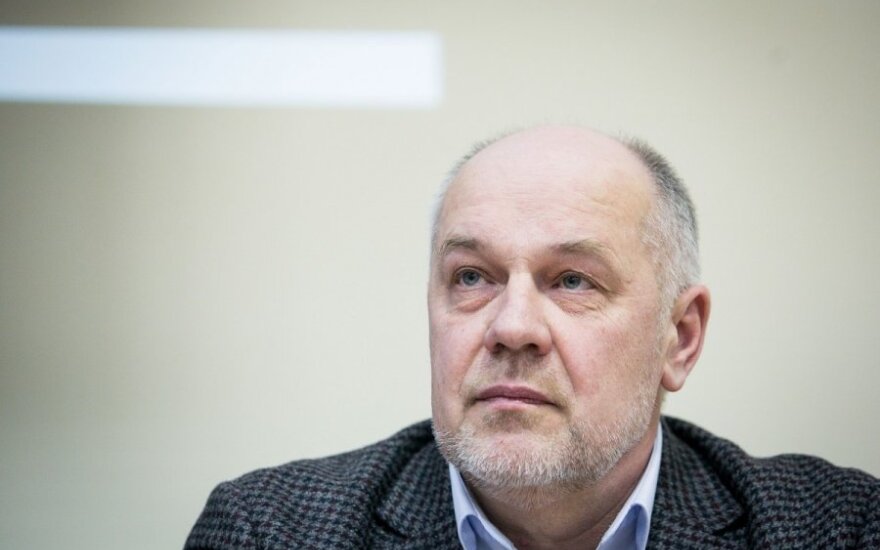 Vilnius University professor Romas Lazutka, who withdrew from the post of advisor for the Minister of Social Security and Labour Linas Kukuraitis, explains that he lost hope that this majority will perform its electoral pledges and will perform fundamental reforms in public finance.

"I entered the position with hopes that the new government, which outlined many important matters in its electoral pledges, that certainly need changing in Lithuania would actually do so. But time passed and many significant electoral pledges, as it so happens, are not being fulfilled and it seems unlikely they will," R. Lazutka told Delfi.

He reminded how during the electoral campaign Stasys Jakeliūnas who was already viewed then as a candidate to the post of minister of finance spoke very specifically, as to what reforms are needed.

Related articles
S. Jakeliūnas: there is no significant tax reform because the cabinet has not had time to “warm up”
A cabinet whose time needs to be endured

"But afterward a minister was chosen who needs no tax reform. It is evident from all his public and non-public statements. What was proposed and done are simply cosmetic changes," R. Lazutka said.

The former advisor to the minister of social security and labour stated he has lost hope that anything will truly change in this term.

"If the main individual to whom the majority should say that this is an important area, we promised during the elections and the public is certainly waiting, few are opposed that Lithuania needs broad tax reform, if this individual does not promise and is not inclined to do it and most are content with this stance, then I think that it is bad," R. Lazutka concluded.

According to him, the other ministers – education, healthcare, culture and social security are simply left making excuses that they cannot take action because funding is needed.

"Lithuania is unique in that the state struggles to gather revenue. (...) Then the ministers must make excuses to the voters and the public that they cannot raise wages for lecturers or change anything in the healthcare sphere, or how children's money are put in place instead of the extra untaxed income size. Though the government programme has outlined to not only establish the children's money, but to also reduce taxation on low earners and parents. That is to say for working people," R. Lazutka said.

No different from others

After seeing the system from inside, the expert was left with the impression that the "Farmers" are no different from previous governments.

This majority, the former advisor notes, also has Tomas Tomilinas and S. Jakeliūnas who said both during the elections that tax reform is needed and do so now, but the Seimas committees are unable to decide to take up such reforms because it is linked with major technical works.

"Certain people, politicians try to adhere to what was said during the elections, but to my understanding, their political power is too weak and there are no real questions asked of the minister himself – whether we are enacting the programme. Thus I think that so be it – let them work, why take a wage for advice which is not needed," R. Lazutka said.

The expert stated he earlier did not even seek to enter power because he did not have hopes, but this time when the uproar arose with the "Farmers" gaining major public support and many seats in Seimas, he believed that they might have enough resolve to finally take up fundamental reforms.

"They could already have been set in motion because they are large, preparatory work is needed. At least the finance minister would say that there is a specific schedule for the work. But now he often just says what was said before that first it is necessary to make changes in the public sector," R. Lazutka observed.

He did not dispute that the public sector has inefficiencies in expenses handling, but according to him, the main problem is that too little revenue is gathered from the GDP.

"And the talks during the elections that there is a need to reduce social segregation, poverty, increase the portion of GDP for social security closer to the EU average, such intentions are no longer visible, so it would appear it will not be pursued because the term duration is expiring quickly," R. Lazutka said.

The former advisor also had little optimism for the government's promises to enact pension reform, which would impact second stage funds.

He reminded how L. Kukuraitis had announced plans to change second stage pension fund financing – to end transfers from the Sodra budget. The former advisor spoke in support of such a thought.

"Sodra is certainly lacking funds, Sodra pensions are also really low and the pensions of those participating in the second stage will also be reduced even though they are already low. There is no logic to gather funding from Sodra and toss it there. Private pensions should be accumulated more from further funding," R. Lazutka said.

According to him, this is being done in all countries, bar a few in East Europe where there is confusion, like in Lithuania.

"This decision could have been done at the start of this year, simply halt it, leave those funds to Sodra and it would have been a source to raise current pensions or leavea a reserve for when the economy and particularly wages cease growing," R. Lazutka said.

According to him, this decision required no massive preparations, only resolve. At the same time, the former advisor states that the opportunity should have been provided for people to pay in more.

"There were certainly many talks about it, but no final real decision," R. Lazutka said.

More than a year of work

R. Lazutka withdrew from his advisory position at the end of January, BNS writes. He provided advice on social security and pensions, disabled social integration policy questions for more than a year.

R. Lazutka is the department head at the Vilnius University Economics and Business Administration Faculty Theoretical Economics Department, provides lectures in this department and for the Philosophy faculty. He matched his current duties with his advisory work at the ministry.

PM expects tax reform laws to be passed by July