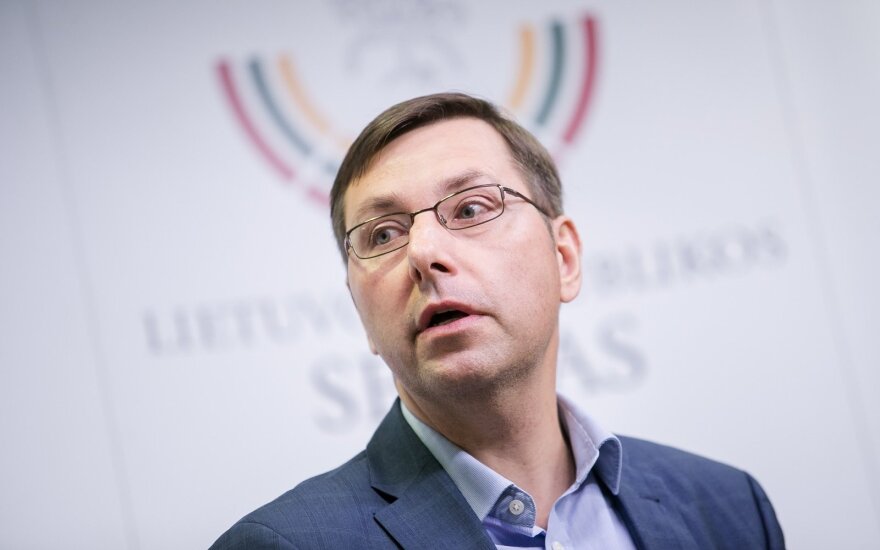 This situation is for Gintaras Steponavičius is like a meaningful choice - whether his presence in the party after expressing suspicion continues to destroy the idea of liberalism, or will he allow it to live independently of his personality. Lawyer Algimantas Šindeikis said to LRT.lt radio, referring to the prosecutors office’s news that the concern MG Baltic financially supported the Liberal movement. According to him, the situation shows that Lithuania has a positive change: "The prosecutors alone dared to follow the high ranking politicians, did a very good job to the state by making the activities more transparent and removing individuals who are sworn to work for the state, but are working for the concern."

- Is it possible to believe that the Liberal Movement benefited from that?

- Some benefit was receives not only by people that we are talking about, but also by a political party. Let us not forget our electoral system. The overall participation by both the MPs in single-member constituencies and political parties participating in the proportional system. Those votes, win the election, so both the party and the people win.

- G. Steponavičius said on Thursday that he had visited about 300 schools, invited public figures for the funds for them to communicate with students. He said that he wanted to do well, and to educate young people. Is it possible to see a conflict of interest in here between politics and business?

- I think that at this stage, the prosecutor's request is by far the procurator tactics. We do not know the exact article, according to which the allegations and accusations were made. So far, we have heard about the abuse, we heard about the effects of trade. Policy work consists of the fact that he was doing a good job in Lithuania, but the question arose for prosecutors, who paid for it, whether it was the MP, a participant in a political campaign, who running freely on the basis of national interests or the interests of certain individuals.

The main subject of the research is the MG Baltic commercial interests and the political independence campaigns of the Parliament members. We, the citizens, have the right that these individuals would serve the Lithuanian state. It should be noted that there has been increased funding of political parties from the budget. So we want these people to work for us - citizens and the state, not the company, which has some interest. I'm not saying that those interests are absolutely contrary to the interests of the state, but there are indications that in some cases they are different.

I think the good news is that prosecutors have so much courage, and can express these allegations against the high ranking politicians, to ask the Parliament to make them responsible. There has been a lot of talk about Parliamentary immunity. You need to remember its function. There is only one – to refuse to prosecute politicians for their political activities. So far I have not heard any argument from G. Steponavičius that by these actions of prosecutors he would be persecuted for his political activities. His political activity which was investigated- how he works and what he is doing.

- What is the most ethical solution in the case of G. Steponavičius?

- It is a complex question because so far we do not know what evidence the prosecution has on him. On the evidence that we have found, when the immunity is lifted and allegations will be made against G. Steponavičius and his lawyer will get acquainted with the material that is collected.
In my personal opinion, the qualification of the prosecutor's office and prosecutors, who are involved in the criminal investigation, are very high. These are very experienced and skilled people. I think those people are very principled. What they have is important information. For G. Steponavičius it will be a personal decision - whether he is forced stay in the party after such allegations or to continue destroy the idea of liberalism, or as Eligijus Masiulis will he allow it to live independently of his person. But it is human, a very difficult choice.

- Can this a party or specific individuals receive the responsibility they deserve?

- I am a lawyer and my profession is to protect people but we must not forget our constitutional structure. Prosecutors are independent. They ask the Parliament to lift immunity, allowing to voice suspicion, to further investigate the case. I think it shows that for the Lithuanian State it is a very positive change. Prosecutors alone dared to follow the high ranking politicians, did a very good job in increasing transparency in state activities and removing individuals who are sworn to work for the state, but are working for the concern.

On the other hand, the inspection of all of these facts, circumstances and offenses will take place in court. It will decide whether the evidence is sufficient. Whether the prosecutors are able to prove the actions of which they speak, will depend on the competence of which I spoke. I want to believe that the courts are independent and will be able to solve the case objectively. This is a positive thing regardless of how the process will end. Politicians are not inviolable, despite in what party they are.