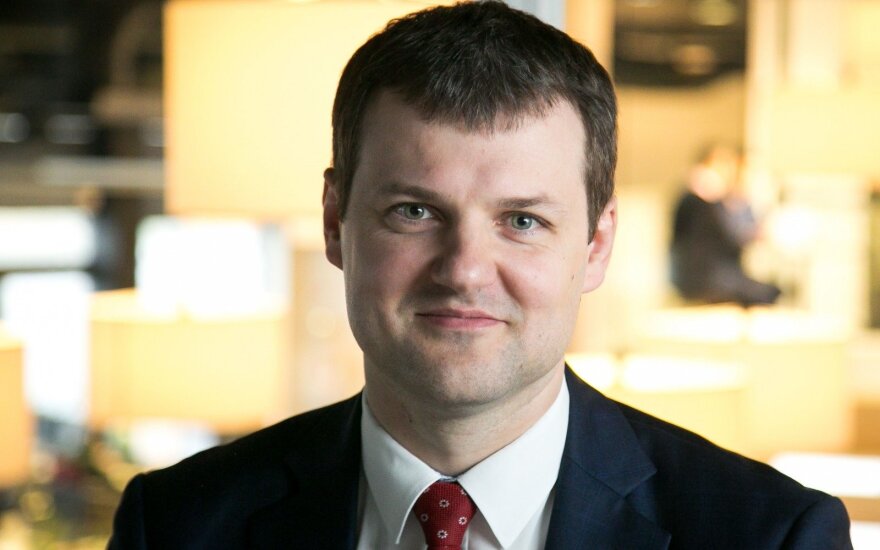 The Homeland Union – Lithuanian Christian Democrats (TS-LKD) leader Gabrielius Landsbergis‘ comment that the most suitable candidate to lead the crisis struck Lithuanian Social Democrat Party (LSDP) would be Vilnius vice Mayor Gintautas Paluckas has angered the leftists. G. Paluckas himself is wondering that perhaps the Conservative perceives him as the most radical herald of Social Democrat change, Lietuvos Žinios wrote.

“I believe that today G. Paluckas, regardless of various views on his actions in the past, is the candidate who could help the LSDP renew itself. While I represent a centre right party, I believe that Lithuanian needs a leftist party, just not what it is right now,” G. Landsbergis said during the Alfa Savaitė TV show several days ago.

When talking to Lietuvos Žinios, Landsbergis explained that the choice of chairman for the Social Democrats will shape the future path of Lithuanian leftist powers and expressed concern that the LSDP could elect a leader who would be bound by the past, leading to the continuation of covering up various suspect events and from there the deterioration and fall of the party. The TS-LKD chairman stated that if the SocDems resolve their various issues and become a modern Western party, the TS-LKD would be able to work together with them in the future, albeit for now the LSDP does not appear to be headed in such a direction.

Landsbergis’ comments immediately received a response from LSDP vice chairwoman, MEP Vilija Blinkevičiūtė, who considered running for the post of chairperson, but withdrew her candidacy. “That is what it looks like to G. Landsbergis, but it isn’t the Conservative party’s leader we are electing,” she noted, stressing that she would back the newly elected chairperson.

Meanwhile G. Paluckas himself believes that G. Landsbergis’ talks may have a different meaning to them – that both the political left and the political right understands that they cannot exist sustainably without one another.

During the discussion of events in G. Paluckas’ past, G. Landsbergis mentioned a stain on the candidate’s biography from 2010, where he was sentenced to two years of incarceration as well as a fine of 16.5 thousand euro for abuse of authority in a public procurement. G. Paluckas was acquitted at an appeal court, however the Supreme Court of Lithuania annulled the acquittal in 2012.

Paluckas admits it is a major stain on his reputation, but notes that he tries to compensate for it through a faster and wiser attitude and political work and adds that he cannot change his past, quoting Algirdas Brazauskas “If you look at me as I was ten years ago, we will find it hard to come to terms, but if you see me as I am now, we will find common ground and will escape dead ends.”
The LSDP chairman candidate quipped that if the Conservatives are praising, one should await trouble. That said he points out that he has received no real rebuke from colleagues for the praise from Landsbergis, stressing that the Conservatives will have no conclusive influence on his party.

Nevertheless he sees a different meaning to G. Landsbergis’ statement – that both the political left and the political right understands that they cannot exist sustainably without one another. The politician explains that with the disappearance of leftist politics, the radical right surfaces, as in Hungary, Poland and other countries and equally with a strong right gone, leftist powers turn to various socialist experiments, thus both sides want one another’s existence to persist in strength. He concludes that G. Landsbergis sees him as one to offer Lithuania a true leftist party, offering real renewal for the party.

A perceived move to the centre

Political scientist Vytautas Sinica believes that G. Landsbergis’ support for G. Paluckas is a natural matter because in this generation of young politicians, the Social Democrat, Conservative and Liberal ideologies have turned so similar they are hard to distinguish, something that has occurred in the West already. With G. Paluckas being the most ideologically similar candidate to Landsbergis, such support is no surprise according to Sinica. The expert also points out that the homogeneity of party values would lead to a death of politics as a struggle of ideas, leading to only competition of who appears most appealing, has the best rhetoric or personal skills.

G. Paluckas rejects such claims, stressing that he is a classical European leftist. He explains that the country has had enough behind the scenes struggling and searches for enemies and that party interest should no longer be raised above the interests of the country, that politics both in Vilnius and around the contry need to be constructive.

Five candidates are running for the office of LSDP chairman – members of Seimas Andrius Palionis and Artūras Skardžius, Minister of Economy Mindaugas Sinkevičius, Vilnius vice Mayor G. Paluckas and M. Varaška. Earlier up to ten Social Democrats had registered as candidates, including MEPs V. Blinkevičiūtė and Zigmantas Balčytis, but half those registered have since dropped out of the race.

G. Paluckas and M. Sinkevičius have received the most support from the party branches. The latter, who earlier headed the Jonava region municipality has been hamstrung by a potential conflict of interests surfacing however. The Chief Official Ethics Commission has begun an inquiry regarding M. Sinkevičius and his father Rimantas Sinkevičius hunts that, as reported by the delfi.lt news portal in 2014, may have been paid for by businessmen accompanying the two politicians hunting. M. Sinkevičius denies such claims and assures he has always paid for himself.

The first round of direct voting by LSDP members will be held on April 6-8, with results to be announced on April 10. The second round of voting featuring the two most popular candidates in the first round is to be held in April 28-29. The new head of the LSDP is to be revealed on May 2nd.