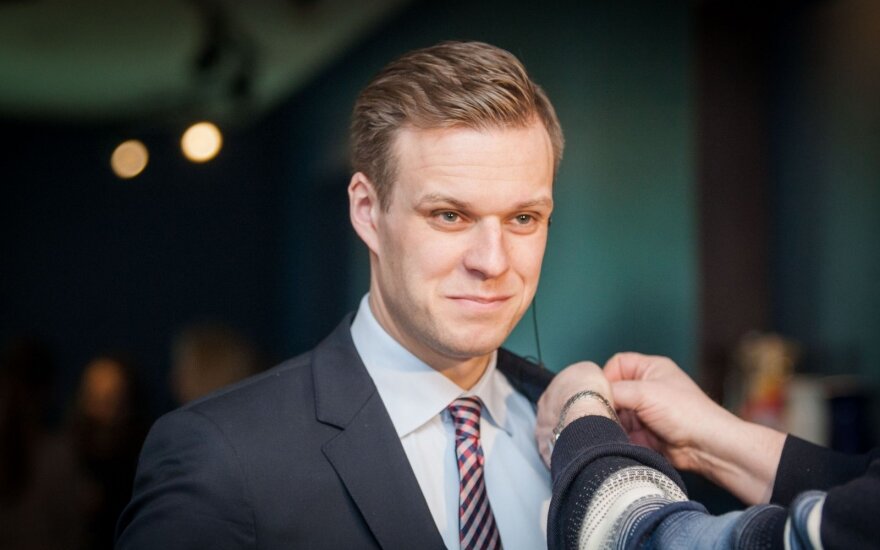 Conservative leader Gabrielius Landsbergis has been surprising lately. Pleasantly for some, while others have been left to think because some of the thoughts he has expressed suggest the politician has new strategic plans, expecting political dividends in the future.

Immediately on becoming the head of the party he spoke about a different communication between party members and voters, invited to relinquish the constantly somewhat irate rhetoric and narrow political approach, where those thinking differently were called enemies of the nation. It appeared to be empty words then, but today he steps even further.

G. Landsbergis has made conclusions regarding the success of the Farmer and Greens Union, where voters put their trust in a large group of non-partisan candidates and simply wiped everyone out in the Seimas elections. What is impressive is that probably no-one has flown by with such a storm in the single mandate districts.

Having tested his popularity in the party in good time and having ensured his position as leader until the next Seimas elections, G. Landsbergis has now spoken up about a tactic similar to the one tested by the “Farmers”.

The entry of new members to the party should be simpler and party candidates, similarly to the USA, should be electable by all voters who view themselves as right wingers.

In essence it is the same sort of opening up of the party to the public and increase of blood pressure in the party’s body as that of the “Farmers”. More circulations would make the party’s body more mobile and perhaps even more youthful and progressive thinking.

On arriving to vote on potential candidates to the post of President or members of Seimas, non-partisan, but right wing aligned voters are likely to support the same party during the elections themselves. This would significantly shift the right wing electorate and would cause pain to the Liberal Movement.

The Conservatives would attract more well-known people to run in preliminaries. Perhaps even non-partisan, but right wing aligned individuals and new voters would follow after them during the main elections.

The TS-LKD would perhaps also avoid the issues that currently plague or will plague the “Farmers” in the future, regarding non-partisan members or turncoats because the “Farmers” grew over an extremely short period of time, without a specific ideology and their core glue was everything the voters approve of. This group was also glued together by the two leading individuals – R. Karbauskis and S. Skvernelis.

No surprise that in recent days G. Landsbergis’ initiatives have irked the Liberal Movement’s leaders.

The unexpected declaration by Landsbergis that he will now on support core decisions by the Skvernelis cabinet has significantly angered the liberals. Supposedly the Conservatives should be in firm opposition. Truth be told, where is the line the opposition must not cross?

Can the opposition support Skvernelis if he intends to demolish the nests of corruption created by former governments in state companies? No? You have to be in a firm opposition? Then perhaps even during war only the majority will defend?

Such talks by G. Landsbergis can also mean a very pragmatic intention to distance S. Skvernelis from R. Karbauskis even more and later even earn the sympathies of “Farmers” who think with the right hemisphere of their brain.

Just think about it – forestries, where the majority are already operating as if privatised and where posts have been purchased for a long time now and corruption thrives behind every tree, are not a field where the Social Democrats will support reform.

Similar things may pass for other reforms proposed by S. Skvernelis. I doubt that there would have been changes in Lietuvos Geležinkeliai or alcohol excise increases either if not for agreements between the “Farmers” and Conservatives and their firm joint position.

The coalition partners, the Social Democrats either do not support reforms at all or are confused in their voting. Even more often there is talk that they should perhaps withdraw from the majority coalition.

The reforms promised by the Farmer and Greens Union will ever more frequently depend on TS-LKD support in the future. S. Skvernelis personally has supported a number of Conservative candidates during the Seimas elections and was close with them, so I have no doubt that in Seimas we may see the emergence of an unofficial Conservative-“Farmer” majority. A number of “Farmers” already publically demonstrate their sympathies to G. Landsbergis.

This is where Landsbergis and the TS-LKD could win more than the currently irate Liberals could offer them – the post of opposition leader. Who needs that? On the other side G. Landsbergis would aim for the role of an informal majority leader even if his group is smaller than R. Karbauskis’ “Farmers”.

This is what the Farmer and Greens feared the most on winning the elections. This is why they offered to form a coalition to both the Conservatives and the Social Democrats. The latter were never in the majority emotionally, it was clear from both the posts they received and they could practically withdraw even tomorrow.

As such it appears that the “Farmer’s” nightmare is stepping over the brink.

So that it would not appear like a nightmare, G. Landsbergis has offered to support S. Skvernelis’ cabinet.

As if stating “Fear not, I am not the nightmare you were long thinking about it and fearing. I am the one to rein in the chaos spread by R. Karbauskis, I am the one that the reforms your promised need”.

However what role would go to S. Skvernelis and his ministers in such a case? Would it not be necessary to plant a new Prime Minister in spring, along with potatoes? I would hope that will not happen.