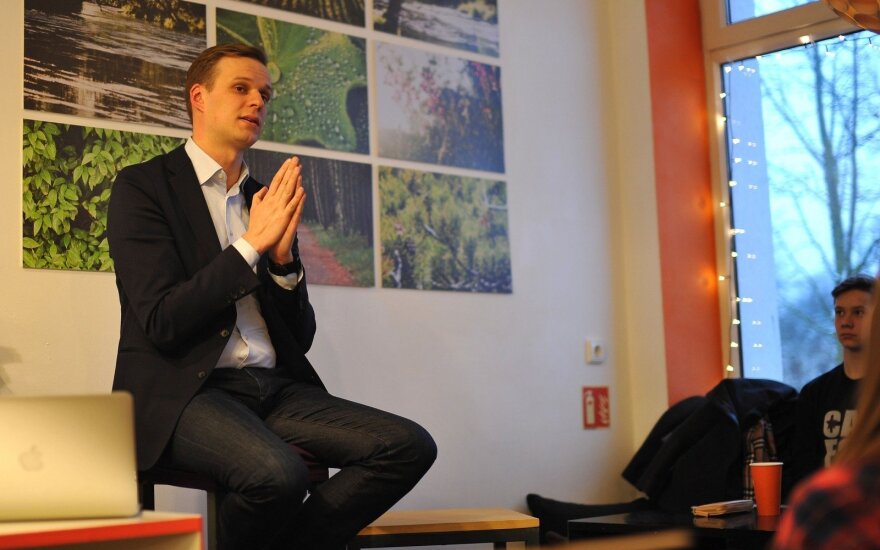 Conservative patriarch Vytautas Landsbergis supports his grandson. In a letter urging fellow party members to support G. Landsbergis, V. Landsbergis chooses to use the name Tėvynes Sąjunga [Homeland Union] and the abbreviation TS because it is more convenient.

It would seem to just be a name. However this proposal has stirred up chaos within the party – the Christian Democrats were angered and claimed they were being pushed out of the party this way, meanwhile G. Landsbergis states that it is necessary to focus on that which unites the party, not separates it.

Related articles
The struggle for TS-LKD chairmanship begins
What will the Liberal-Conservative confrontation end in?

Currently an election campaign is ongoing in the party. Other than incumbent G. Landsbergis, Mykolas Majauskas and two representatives of the Christian Democrat wing – Paulius Saudargas and Žygimantas Pavilionis – are participating in the election.

“Talks of the need to shorten the name, change it because it supposedly is an issue are a provocation, an attempt to test how it will be reacted to, whether something will happen in the party. I can firmly state that perhaps it is these people, who are proposing the idea, thinking whether the party will break up. I am talking earnestly. Because a change in name with such autocratic passing down of an idea with no discussion in the community, well it is impermissible, it is an attempt to impose their will on the majority. There could be unforeseen consequences,” said the party’s Christian Democrat community Chairman Valentinas Stundys.

According to the politician the shortening of the name hides a deeper meaning – it is an attempt to steer what direction the party will take – that of liberalism or Christian democracy.

The Christian Democrats are concerned that G. Landsbergis’ goal is to attract more liberal voters, meanwhile they are in support of traditional Christian democrat ideology, with a moral compass based on Christian ideals (ban on abortions, defining family exclusively around marriage), while in the economic sphere focusing on leftist ideas of social sensitivity.

As a reminder the Christian Demcorats entered the party’s name in 2008 when Andrius Kubilius’ Homeland Union and V. Stundys’ Lithuanian Christian Democrats merged.

“If there are attempts to do so, it would be the coarsest, impermissible and least understandable breach of two parties’ merger agreement. The agreement would be, in essence, annulled,” Stundys claimed, adding that the tradition of Christian Democracy is hundreds of years old and during the merger the parties agreed to nurture this tradition.

“It provokes a potential break-up,” the politician adds.

Party Chairman G. Landsbergis confirms he proposed the idea to shorten the name, that it could be proposed at party congress. “I believe I could propose such a thing,” the politician says.
“At the beginning of the electoral campaign I raised this as a philosophical thought of that which unites us. It is a love for our homeland. Homeland Union. We are all gathered under its umbrella,” Landsbergis explains.

He also notes that many fellow members agree with the idea, flooding him with letters. “This is when the idea started crystallising, that it can truly be done. And I say, people’s support for the idea is enormous,” the incumbent party leader stated.

G. Landsbergis associates the idea with an “earnest unity”, but pointed out no causal link between a change in name and unity.

Is it true that the idea is there to provoke the Christian Democrats or silently exist, or perhaps even leave the party? G. Landsbergis says this is absurd. “It is an absurd and election oriented logic. I find it unfortunate that people would say so,” he states.

“This obsession that the name is most important shows the flaws in the argument. Is Christian Democracy just the name? In the name of unity I could completely change the name of the party, say something like Party of Lithuania. I am, of course, joking,” Landsbergis said.

When further queried, pointing out that names and words can matter, for example there being a large different if we call the conflict in Ukraine a “civil war” or “Russian aggression”, G. Landsbergis was irritated, asking “Are you comparing my statements with Russian aggression in Ukraine? Those are some strong comparisons.”

Meanwhile Mykolas Majauskas, who is also running in the election, claims that discussions of changing the party’s name will yield nothing. In his opinion the party should discuss what needs to change in the country and take action even while working in the opposition.

“In my opinion the Berlin wall fell not because they took the bricks out, but because the wall ceased to exist in minds and hearts, that is where events took place. Here the walls will fall not because you take out a brick or remove LKD from the name, but they can fall when no-one needs the walls anymore. And walls are needed because there is nothing to do. Sit alone at home behind your barricades and return fire. If everyone left to the yard to work together, no-one would need those walls anymore,” Majauskas said.

The politician explains that currently he is most focused on suicide prevention and children’s rights protection reform and not changes in party name. He also refers to the leadership of Andrius Kubilius’ government when the party was united in common work and the abundance of it. This provokes talks that A. Kubilius is perhaps no longer supporting G. Landsbergis.

In March 2015 Kubilius clearly expressed his support for his young colleague. “I urge to support our young colleague Gabrielius Landsbergis’ candidacy to the post of party chairman,” A. Kubilius wrote on social media back then.

This time he is not expressing support for anyone, only pointing out he misses discussions about Lithuania. Why? “I have already said – in my opinion G. Landsbergis will win in this election with no external support because that support is like some sort of admission of weakness,” Kubilius said.
When asked what he thinks of the party changing names, the former party chairman and PM says that actions are more important than words, concluding that “I am not going to decided it. Either way works for me.”