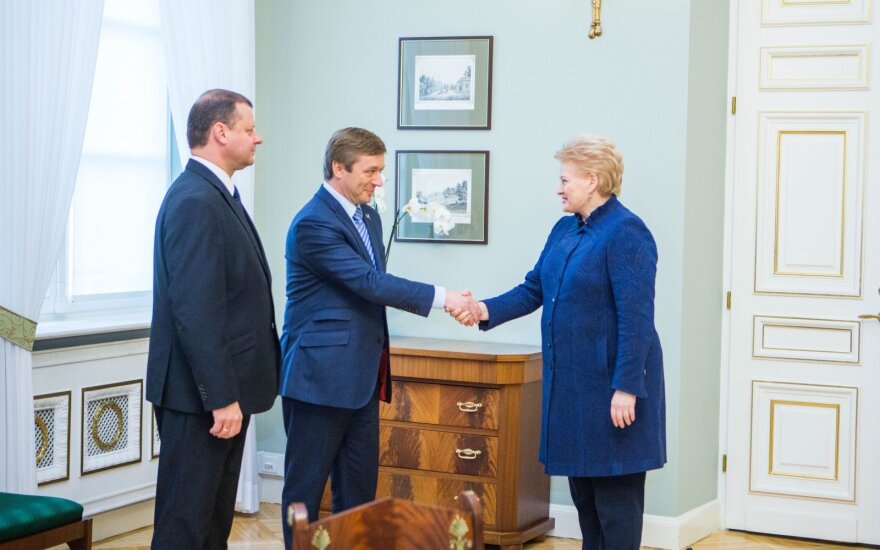 The Seimas National Security and Defence Committee (NSGK) parliamentary investigation and the accompanying "Farmer" and Conservative urgings to take up deeper analysis only show that this is simply the first stage of a conflict between the majority and opposition, Vytautas Magnus University professor, political scientist Lauras Bielinis tells lrt.lt.

Lrt.lt reminds that last week on the NSGK announcing the conclusions of its parliamentary investigation, which looks at the influence of the MG Baltic group and Russian energy corporation Rosatom on political processes in Lithuania and government institutions' decisions, the "Farmer" leadership spoke of a need to continue the investigation.

"Farmer" leader Ramūnas Karbauskis sees business groups' influence on the Homeland Union – Lithuanian Christian Democrats (TS-LKD) as the subject of a new investigation, with the TS-LKD having been in power with the Andrius Kubilius government in 2008-2012. Furthermore, the "Farmers" continue to desire to investigate the actions of President Dalia Grybauskaitė (supposedly the State Security Department (VSD) presented information to her on business links to politicians) because the ruling majority also has doubts due to previously published correspondence between her and former Liberal Movement leader Eligijus Masiulis. Based on VSD material in the NSGK investigation, the Liberal Movement is specified as a party, which fulfils the interests of MG Baltic.

Only one clear winner so far

Mykolas Romeris University docent, political analyst Saulius Spurga is convinced that following the conclusions of the NSGK investigation, which, according to him are in the end abstract, yield political dividends to only one party.

"It is fairly clear that the majority, that is to say the "Farmers", who are steering this process, will be the winners," S. Spurga told lrt.lt.

Based on the political analyst, regardless of other parties not being presented as being influenced by business groups akin to the Liberal Movement and Labour Party, the "Farmers" continue to seek to declare that the Conservatives, who were in power then, could have known of the influences of MG Baltic and Rosatom. This role helps them to feel like fighters of justice according to S. Spurga, who also notes that they will likely seek to use this card in the coming elections.

The "Farmers" can be seen in broadcasts: they explain, they accuse, they fight for justice, unveil bad things. For politicians it is the greatest fortune and best recompense. This event will long be made use of, it will also be spoken of both during and between elections. It won't end this quickly," the expert assured.

"The "Farmers" obtain a status of fighters against entrenched corruption here and thus it is unsurprising that certain politicians in the right or lean to it, are in a rush to emphasise that Agrokoncernas is also participating in politics. It is very natural that one side seeks political benefit by presenting this investigation. I do not say that the investigation does not unveil the fact of corruption, but it is very obvious that the unveiled corruption facts are beneficial to those, who are either new or so small that they never got a piece of the action," V. Vobolevičius said.

Conservatives unafraid of the rigours of investigation?

Political scientists spoken to by lrt.lt concur that the NSGK investigation conclusions were, as expected, the most unfavourable to the Liberal Movement. That said, the conclusions also speak of another opposition party – the Conservatives. The document has mentions of business groups' financial support for TS-LKD representatives in elections, about former PM Andrius Kubilius' meeting with the representative of Rosatom-owned Nukem Jonas Tamulis.

Political scientist L. Bielinis believes that these episodes linked to TS-LKD representatives may not be similar to business influence the same as in the Liberals' case, but will still harm the Conservatives' image.

"I believe it is a blow. Perhaps it has no power in a legal extent and likely will not develop into some sort of legal proceedings, but in terms of image and public opinion there will be changes. Due to this, the Conservatives should think about defence and retaliatory measures as well. There is time yet to the elections and I believe that we will see a number of struggles yet," L. Bielinis shared his insights with lrt.lt.

V. Vobolevičius does not share the same opinion. According to him, the TS-LKD electorate, seeing the "Farmer" efforts to criticise the Conservatives' potential links to business groups, will likely remain loyal.

"The voters, who listen to the conclusions and see that such "Farmer" hints are also politically motivated, vote for the Conservatives and will be prepared to ignore potential links, especially if the links are not as obvious as, say from the "money in a box" case. And those, who listen and will get angry, aren't Conservative voters anyway. Thus I believe that this will have little impact on the Conservatives," V. Vobolevičius pointed out.

It was hoped that the presentation of the NSGK investigation conclusions would become a political explosion, however political scientist L. Bielinis is uninclined to view the conclusion of investigations as such. According to him, the political bickering following the committee conclusions simply shows that this is just the beginning of the most intense struggles between the majority and the opposition.

"We are certainly not at the end of the process, but at its beginning. The process will end together with elections. There is no explosion here. It is clear that everything bad that could be done to one's opponents, the "Farmers" have done during the NSGK investigation. The investigation conclusions are an effort to escape the accusations (on links to Agrokoncernas), which could be baseless and thus prevent their opponents from striking back. Hence for now we are not seeing an explosion, but an effort to conclude the first stage of the conflict and we await the second stage, which will start who knows when," the political scientist commented.

The expert did not dismiss that the next stage of this conflict could be the "Farmer" push for an investigation on D. Grybauskaitė and E. Masiulis' correspondence. Furthermore, according to L. Bielinis, the head of state's reaction to the NSGK investigation, which she described as a political process, could add oil to the fire.

"I believe that we can await the second stage of the conflict when the president makes her annual address and in it will perhaps choose to make highlights or show the world according to D. Grybauskaitė. I wouldn't call what will happen then an explosion, but a certain conflict f interests, opinions and evaluations, which would lead to some sort of chaos in the political arena," L. Bielinis cautioned.

V. Vobolevičius spoke on a potential struggle between the "Farmers" and the president as well because, according to him, D. Grybauskaitė could be a cause for serious concern for the "Farmers".

"She is an influential, capable politician, whose completely hypothetical entry into Lithuanian, not European policy at the end of her term would greatly shuffle the "Farmers'" cards and perhaps less so, but still would do so for the Conservatives as well. This is why she is being attacked," the political scientist spoke on why the "Farmers" could seek to investigate D. Grybauskaitė's relations.

The leaders of the ruling Lithuanian Farmers and Greens Union (LVŽS) on Thursday called for new...