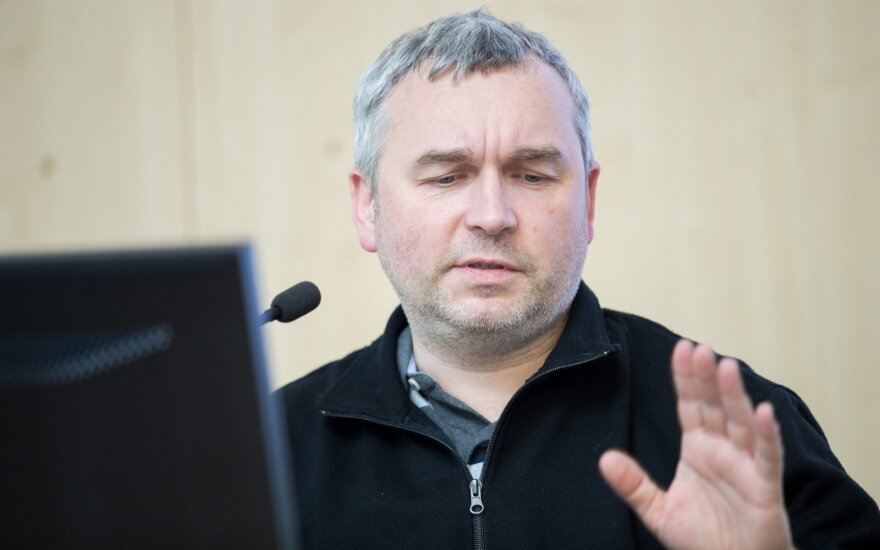 According to, economist Raimondas Kuodis, it would appear that the Government lead by Saulius Skvernelis has forgotten the election promises made by the Peasant and Green Union.

"There was a lot set out to achieve. However, from a large cloud – there was little rain" – stated the economist in regards to the tax reform presented on Friday.

Last year, in the presented "Sustainable Lithuania" program a point was made to note that after the formulation of the new Government the work done by the 2013 formulated work groups regarding tax reform will be continued.

Furthermore, the program of the LVŽS promised that the procedure regarding tax calculation will be made simpler, and two main taxes will be set – the personal income (GPM) and the pension insurance (PDM) taxes.

Moreover, the winners of the Parliamentary elections also stressed that wages will no longer be divided into the two portions for "employee" and "employer".

However, it would appear that in the new tax and social system improvement plan, this intent is gone.

Interest expressed in only a single tax

According to, R. Kuodis the afore mentioned work groups also suggested that in order to lower the "shadow" economy there is a need to combine contributions made to "Sodra".

"There was talk about personal accounts in "Sodra" in order to make it more transparent and clear to the banks. However, despite the election promises this is not taken up. Currently, more attention is given to smaller "GPMs"" – stated the economist.

"The great problem is "Sodra" for which to handle no one is proposing anything. The second problem, regards the mandatory health insurance which is another GPMs but with another name. However, even with it nothing is done, even though the work groups proposed to remove it. Than we have changes needed to be made regarding the third GPM which is not so big in Lithuania only about 15 pct." – the economist commented.

The economist further noted that the proposal to compare the size of the non-taxable income (NPD), with the minimum monthly wage (MMA) was proposed in 2008 by Algirdas Šemeta the former Minister of Finance.

"Although, that is done, it only a question regarding about 10 euros to a person receiving a MMA" – added R. Kuodis "Which is why I do not call it a reform – but rather a cosmetic makeover".

According to, R. Kuodis while the display of the Governmental attention given to the low-income workers is commendable. It is still unclear what changes will be made in the accordance with the Governments decisions, and how much will they change the overall trajectory of the economy.

"Any just taxation system must first take care for those who are disadvantaged. But at the same time the increase regarding pensions was agreed upon based on the social model" – the economist stated.

"Lithuania contributes almost half as such GDP to pensions when compared with the European average on the matter. This is a structural change needed to be addressed, and yet nothing is done. This is why "Sodra" is not substantially reformed in ways that would changes its activities, incentivise for people to make contributions to it" – he further noted.

Moreover, while presenting the tax plan S. Skvernelis noted that the merging of contributions paid to "Sodra" will not happen, as this proposes a risk that not all employers will ensure the same wage.

Furthermore, while V. Šapoka has previously stated that contributions paid by the "employer" and "employee" in other countries are not merged together.

However, these arguments failed to convince R. Kuodis.

"Just leaving a sort of a swamp simply because of the reason that we are not sure how to dry it completely – there is no logic regarding this, because we would still leave a swamp. Politics is like this – we make decisions, for which consequences we are not quite sure, but you weight the risks and see which way you need to go" – he noted further.

According, to R. Kuodis the merging of the contributions paid to "Sodra" was a cornerstone of the tax reconstruction plan.

"This question is also related with the question of the contribution ceiling for "Sodra". They do not calculate how to reform the "Sodra" ceiling, as a part of the wage will still be going to the employer. What the devil? I understand, that they have no clue in regards to what they are doing" – the economist commented.

According to, the economist politicians in Lithuania are not utilizing economic logic but rather legal logic, as allegedly the tax is always paid by the person that the legal requires to make payments.

"However this is just shows a lack of competence. When in 1993 the PVM was introduced to the business sector that did not mean that businessman paid it. Since the prices suddenly went up by 18 pct. or the exact amount of the PVM. So who paid it? The Consumers paid everything" – R. Kuodis stated.

This is a similar situation regarding the contributions to "Sodra" paid by the "employer" and "employee" – their separation does not make any sense, as everything is still paid by the employee.

"This is how we are living in this country. Someone is doing something, but they do not understand what they are doing. Than they suddenly say that nowhere in Europe it is like this. Thus, the European politicians also do not understand these things, but this does not mean that they are all madmen, which is why we need to go in their direction" – R. Kuodis stated.

One the other hand, in regards to the tax reform proposed by the Parliament the chief economist of "Swedbank" Nerijus Mačiulis was largely uncritical.

"Although, there will be people unhappy with the decision. However, a more reformed tax system, will be more transparent, efficient and fairer" – the economist commented to the media representatives.

The economist further noted that the most criticism will be received in regards to proposals made about the removal of certain exceptions or governmental assistance, and not in regards to the lack of ambitions or changes made to the program.

"Nevertheless, the negative perception of the general public in regards certain major issues regarding reforms will be in regards to the choice of maintaining the status quo, to which a moderate change is expected to be made. However, the most important this here is to understand although the changes are not big, they are moving us in the right direction. Thus, the benefits will be first felt by the most vulnerable segments of society." – stated Nerijus Mačiulis.

The Lithuanian government plans to earmark an additional 500 million euros in next year's budget for...

The Lithuanian government of Prime Minister Saulius Skvernelis has stepped back on its intentions of...

Nausėda and Minister of Economy propose how to save the regions