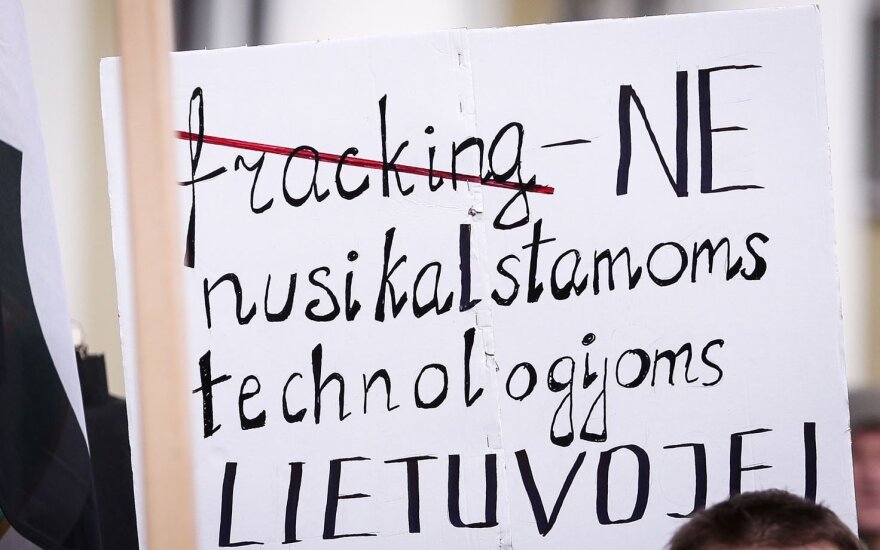 Several US congressmen have initiated an investigation which aims to investigate the potential influence of Russia on "green" movements which are fighting against fracking. There have been discussions of a similar investigation in Lithuania as well.

"A few hours ago I spoke with a good friend, US congressman John Shimkus, who is of Lithuanian origin. This is the man who paved the way for the export of American shale gas across the world. We are among those who benefit from it – soon we will welcome two ships to Klaipėda with American gas which will allow us to forget our dependence on American gas. However the Americans are concerned because Russia, a country dependant on raw material exports for its income, is attempting to halt the global energy revolution," member of Seimas Žygimantas Pavilionis said.

He highlighted that some time ago several US congressmen initiated an investigation which aims to investigate the influence of Russia on so called "green" movements in the USA.

"It is believed that Russia was always interested in exaggerating the dangers of fracking. The Kremlin acted covertly – money was pumped through shell companies. There are genuine suspicions that one of these companies, Klein Ltd. allowed the transfer of tens of millions of dollars to the US NGO Sea Change Foundation," Pavilionis states.

The parliamentarian believes that such "greens" discredit ecology because they have simply turned into the Kremlin's tools, fighting against fracking and export of shale gas to countries such as Lithuania.

"During discussions with Shimkus we decided that the current situation is a problem for not only the USA, but also all other countries. This is why the member of congress promised to talk to his colleagues regarding the opportunity to expand the investigation into other regions, including ours. Shimkus himself will be visiting Lithuania in late August and no doubt will be able to tell more," Ž. Pavilionis.

The politician himself plans to initiate a parliamentary investigation, which should apparently be performed by the Seimas Committee of National Security and Defence (NSGK), in order to investigate what influence the Kremlin has on "green" movements in Lithuania.

"We cannot wait and have to find out whether there is no Kremlin influence in this regard. After all US companies such as Chevron, with plans to invest in Lithuania, appeared in the "greens'" crosshairs for a reason," Ž. Pavilionis states.

The chairman of the NSGK, Farmer Greens group member Vytautas Bakas stated he supports cleansing the political system and stated he has initiated an investigation himself.

"After the story of M. Bastys, after the NSGK performed a review over threats to national security, potential influences of foreign special services, I believe that the Seimas should continue working and encouraging the political system to cleanse itself. It is obvious that the case of M. Bastys showed that there were other illegal and irreconcilable with national interests actions and people. This is why I believe that we should investigate both the illegal lobbying of both politicians in representing the hostile interests of foreign countries in opposition to national security interests, as well as businesses," V. Bakas said.

According to him, the extent of the investigation should be defined by the Seimas. In his opinion, influence on energy projects and the illegal influence of business on political decisions should be reviewed.

"I have gathered more than 40 signatures from the "Farmer" group, members of Seimas from the mixed group and others also signed. We are currently in talks with the Social Democrats and Conservatives. I believe such initiatives will appear in autumn," V. Bakas said.

Suspicions over Russian influence in the US

The politician received a pledge of support, urging to follow the US' example in the next NSGK meeting from a fellow member of Seimas in the committee, Laurynas Kasčiūnas.

According to The Daily Signal, two members of Congress from Texas, the United States House Committee on Science, Space, and Technology and Subcommittee on Energy member Randy Weber, sent a letter to US Secretary of the Treasury Steven Mnuchin, where they wrote of "a secret campaign against shale gas" with "minor traces in documents."

The congressmen cite sources which state that the Russian government is complicit with environmentalist groups, aiming to spread disinformation and propaganda over hydraulic fracking, which allows easier access to natural gas sources.

Among the sources we can also find a former NATO Secretary General, who is cited as stating that Russia, in an effort to maintain dependencies on its gas exports, is actively engaged with so-called environmental NGOs, which act against shale gas. The congressmen explained that from such Kremlin-funded activist's actions, it is Gazprom that profits the most.

Among high US officials who admitted links between Russia and environmental groups we can also see mention of former Secretary of State and 2016 presidential candidate Hillary Clinton.

Among documents revealed by Wikileaks we can find a "private speech" made by her in 2014, where she discussed Russian support for environmental protection groups.

In their letter to the Secretary of the Treasury, the congressmen also stated that the Russians could have developed their strategy without leaving traces in documents. They are supposedly pumping funding through a Bermuda-based company Klein Ltd.

Supposedly this way Russia has transferred tens of millions of dollars to the US based NGO Sea Change Foundation.

How many politicians working in the Parliament are still loyal to Russia?

US Congressman John Shimkus of the Republican Party has made an address to US legislators, calling...

The Special Investigation Service (STT) will be able to gain access to financial data of banks and...