Vaidas Saldžiūnas, DELFI
aA
Seen as one of the most important Russian financed propaganda channels, the news agency Sputnik has so far been releasing their reports in more than thirty languages. The two year old Kremlin information project will be releasing “diverse opinions” in Lithuanian from now on as well, states is website. 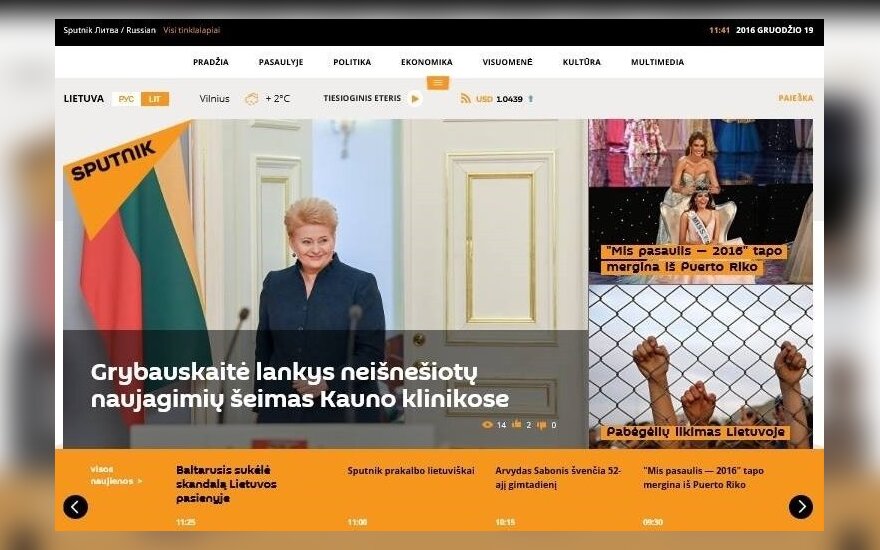 Started prior to Christmas, the Lithuanian version of the channel Sputnik is so far humble. While the propaganda channel‘s website explains that “A professional team of journalists and editors discuss international and local events and presents diverse opinions on relevant topics,” so far the information presented in Lithuanian is mostly material from the news agency BNS.

That said the Lithuanian Sputnik boasts that it presents news in various formats other than text – video recordings, photo galleries, live broadcasts, internet voting and infographics. The latter, by the way, are quite a few – about the psychological health of Lithuanian citizens, about Christmas celebrations, the New Year calendar, Klaipėda port and Lithuanian army procurements.

Other than presenting information, the portal Sputnik Lietuva assures readers it will be presenting “analytical articles”, exclusive interviews and expert opinions. What this will look like, Lithuanians can find out from Estonian and Latvian citizens – in these two states, Sputnik has been distributing tendentious information from the start of the year.

Officially Sputnik is operating in 34 countries in the world and presents itself as a source of alternative information. In many countries, however, Sputnik is known as one of the tools of Kremlin propagandist Dmitry Kiselyov, spreading deceitful information which adulates the Kremlin regime.
“We should not call this news media because no agency that calls itself would present articles of such authorship, not identifying its editorship, so how can Sputnik be called news media?

This is a fully political state-financed tool and its agenda is dictated by the Kremlin,” states Vilnius University lecturer Nerijus Maliukevičius, who has been examining information warfare for more than a decade.

According to him the fact that the Kremlin mouthpiece appeared in Lithuania far later than Estonia or Latvia can essentially be seen as a positive sign because this can mean that Sputnik struggled to find Lithuanian speaking employees who could create content.

“The appearance of such a channel is no surprise because already in creating Sputnik it was presented as being aimed at foreign markets and being broadcast in local languages. In Latvia and Estonia the human resources in use are more willing to cooperate, while in Lithuania it is not yet clear, how and who will create content – locals or people sitting in Kaliningrad or Moscow,” said N. Maliukevičius.

Delfi sources suggest that already in March, Chief Editor for Sputnik in Belarus Olesia Luchanikova started to actively seek people for a team which would work from Minsk. It was planned that the Lithuanian department would have a staff of 10. Of them – 5 in Lithuania and the same number in Minsk. The sources state that the wage offered was 800 euro per month.

How would Lithuanian officials respond to inquiries?

N. Maliukevičius stressed that Sputnik Lietuva appearing points out the Kremlin realises the younger audience in Lithuania no longer has Russian language skills, furthermore Lithuanian youth obtain information from the internet. This is apparently why the goal of Sputnik Lietuva is to reach the younger consumers of information, aggressively presenting supposedly “alternative” information.

“Knowing the methods and experience in operating in social media of another Kremlin mouthpiece – RT.com – distributing information in the shape of important news releases, making algorithm based decisions, so that false news would be pushed into certain information bubbles, we can expect similar actions from Sputnik. I am not ringing alarm bells, but there is a potential danger that “alternative”, but in fact false messages will be spread,” warned the expert. He assured that even Lithuanian state officials may be faced with challenges. For example on receiving requests to comment on events, officials should keep in mind who is presenting the request.

“If the authors of the request are journalists from Sputnik, my answer would be clear – not to comment under any circumstances. This applies to all other Kremlin propaganda channels – RT.com and the like, but the question is whether officials will realise this?” mused N. Maliukevičius.

US understands Lithuanian bans for Russian 'propagandists' - US diplomat

A top-ranking US diplomat in charge of sanctions says he understands the Lithuanian decision to refuse...

The new propagandists who dominated the Russian media were formed by the experience of the trauma of...

Opinion: How the Kremlin infiltrated an EU referendum in the Netherlands

The student leaders of 1968 could probably not have imagined how their democratic ideas would be...