Kęstutis Girnius
aA
The graft case involving eight judges is the greatest blow to Lithuanian judges and courts since independence was recovered. It is correctly emphasised that we should not rush to conclusions and that currently the suspects only stand accused and their guilt has not been proven. 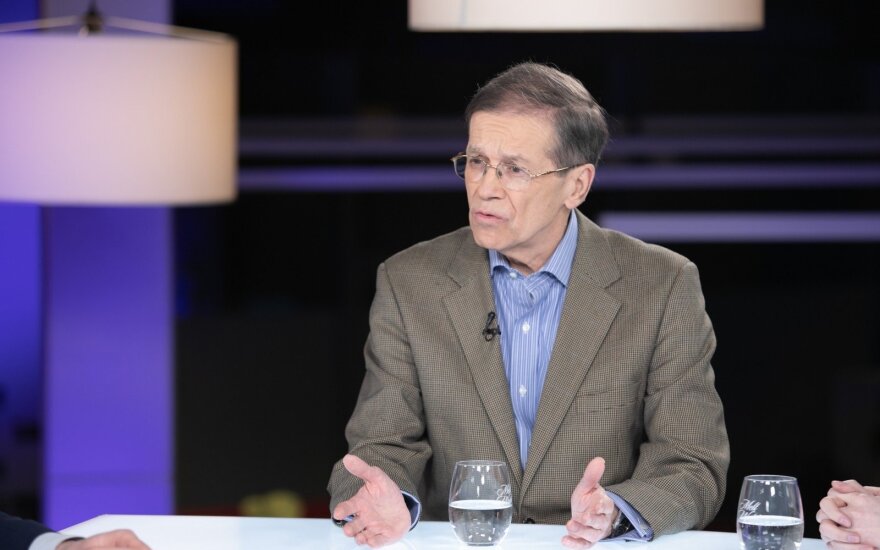 But knowing that action against judges would not be taken without reliable evidence and that during searches, 200 thousand euro in cash was found, there is basis to believe that the Special Investigation Service (STT) "largest operation in history" accusations are not baseless.

It is clear that trust in the courts will fall and that it will be tough to recover it.

This could be the reason, why President D. Grybauskaitė and Court Council chairman Algimantas Valantinas sought to grant the courts and judges the most favourable interpretation of events.

According to the president, "The legal system has displayed that it is able to cleanse itself because without the aid of the judge community itself, this investigation would not be possible."

I do not know how much the judge community contributed to the investigations, but if its contribution was significant in this case, it means that for a decade it did not react to concerning events.

In defending the judge community, the president is also making excuses for herself. While she has been curating law enforcement for a decade now, only now is judge corruption being investigated in more detail. Grybauskaitė's intolerance to corruption is praiseworthy, but her capacity to combat it is average.

Valantinas assures that "The Lithuanian court community was always committed to taking the necessary steps to increase the openness of the courts and eliminate any manifestations of corruption." I have no doubt of this.

He could not claim that the court community was not prepared to take actions to weed out corruption and was indifferent to corruption. According to him, distrust in the courts "Creates an atmosphere of distrust and danger in the public and poses a threat to the principles of democratic statehood."

That is also undisputable, but one could ask, why the Judge Council and other institutions of the judge community did not take action to restrain corruption among judges for so long.

It is easy to appear wise post factum, to talk about judge corruption after cases have been opened against them. But it was long clear that Lithuanian courts were incapable of suitably dealing with major political cases, which would be stalled for years, the accused simply found innocent or only fined.

The stalling of cases is overt and simply brazen. One cannot dismiss the possibility that some of the suspects are innocent or that there is not enough evidence for a conviction. However, the judge community must have become suspicious when innocent verdicts were more the norm than exception in political corruption cases.

After the arrest of Liberal Movement leader Eligijus Masiulis in 2016, Delfi released the article "The great political corruption cases in the history of independent Lithuania." It is worth a read because it shows that almost every time the accused were either found innocent or received minimal punishment.

The first case mentioned was that of Audrius Butkevičius, who was arrested with an envelope containing 15 thousand US dollars from the director of the fuel company Dega in 1997. In 2003, hence six years later, Butkevičius was found guilty and sentenced to six and a half years in jail, a fine and half his property was confiscated. This is near the only politician to be jailed.

In 2003, the then state-owned largest alcohol producer in the country Alita was sold to its board for almost 17 million euro, while an Italian businessman, who offered around 26 million euro was removed from the competition. In 2011, the Supreme Court (AT) found former State Property Fund head Povilas Milašauskas, accused of abuse of office and causing harm to the state, innocent.

In 2004, Vilnius Mayor Artūras Zuokas supposedly directed the head of Rubicon Group to hand city council member Vilmantas Drėma a bribe of around 6 thousand euro so that the councilman would vote for Zuokas' mayoral candidacy. In 2009 the AT found the Rubicon Group businessmen guilty, but did not evaluate Zuokas' actions due to his legal immunity as a member of Seimas. Earlier he was found guilty by the Vilnius District Court and given a minor fine.

The Order and Justice Party's case over sale of influence is especially delayed. In 2014, a dozen searches were made at the homes and workplaces of five individuals, as well as the Order and Justice headquarters. It is suspected that the party received a total of 377 thousand euro. The case was eventually handed to the Panevėžys District Court, which only started deliberating on it this January.

In the MG Baltic case, Raimondas Kurlianskis is accused of bribing politicians for decisions favouring the group. Masiulis apparently received a 100 thousand euro bribe. Former MPs Šarūnas Gustainis, Vytautas Gapšys and Gintaras Steponavičius are also involved. The MG Baltic Group, Labour Party and Liberal Movement are also suspects. It is unclear how the case will end, but it is clear it won't be soon.

In 2016, an inquiry was launched whether Gedvydas Vainauskas made an agreement with Rolandas Paksas that the latter would influence officials for 15 thousand euro so that they would allow to use a new Norfa store in Prienai. In October 2018, the prosecutor changed the charges, deciding that the Order and Justice Party should be held to account as well.

This complicates matters. In December 2018, Paksas did not attend the court hearing because he was in Russia, while Vainauskas stated that on January 15 – March 1 he intends to travel for health reasons. In the USA, Paksas and Vainauskas would risk a fine for disrespect to the court and perhaps even jail time.

It is hard to understand how the judge community tolerated such a situation. The impotence of the courts reduces the citizen's trust that justice will be served. The courts should deter potential criminals, show what they will face if they break the law. But what politician will be deterred if his colleagues are found innocent or receive minor fines almost every single time?

Gapšys and the Order and Justice Party are already embroiled in a number of cases. It is said that delayed justice is justice unfulfilled. In many of the cases mentioned, the accused stalled the process. However, the Liberal Movement could complain that it has become a hostage of the courts.

Until the MG Baltic case ends, a shadow of corruption will hang over the party, leaving it in limbo.

Not everything depends on the courts. If the prosecutors and special services do not perform their tasks suitably, the courts cannot remove the flaws.

But it is possible to establish regulation, how long proceedings must last, monitor which judges are unable to cope and so on. It is time for the legal community to show and not just declare resolve to take necessary action.

“Foreign politicians accuse Russia of meddling in elections and referendums around the world. In...

Bad news from the courtroom for V. Gapšys

MPs to decide on new probe into influence on political processes

Lithuanian lawmakers are expected to decide on Tuesday whether or not to open a new parliamentary...