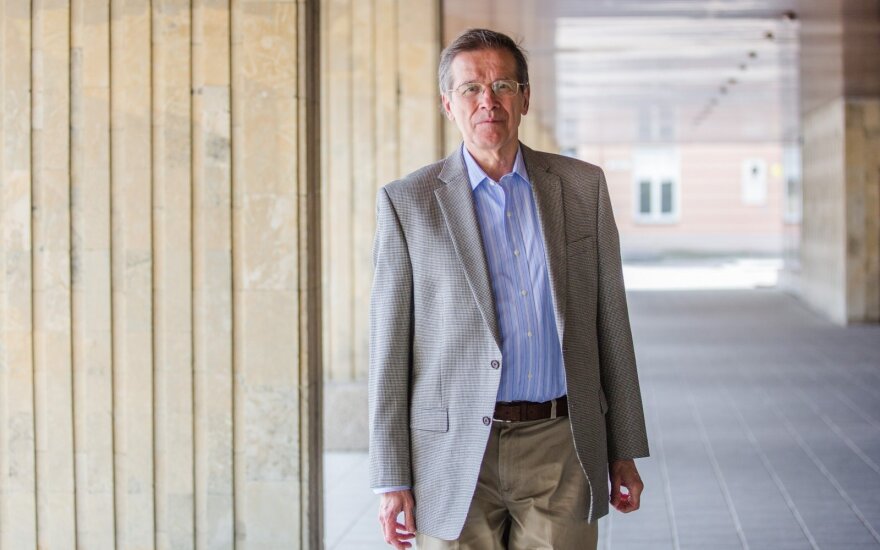 World media rarely pays particular attention to Lithuania. Last week was an exception, but it was neither a reason to celebrate, nor to be proud.

The European Court of Human Rights (ECHR) ruling that secret Central Intelligence Agency (CIA) prisons operated in Lithuania and Romania last decade was widely discussed. The court reached the conclusion that Lithuanian authorities knew that a terror suspect Abu Zubaydah was held in the prison and that the CIA treated him in breach of the European Convention of Human Rights. While Lithuanian officials did not have detailed knowledge of what underwent in the imprisonment facilities, Lithuania had to take steps to ensure that individuals under its jurisdiction are not tortured.

President D. Grybauskaitė stated that the decision is not favourable to Lithuania, that Lithuania's reputation was harmed and that the country must obey the court's ruling. Seimas Speaker Viktoras Pranckietis spoke similarly.

The country's representative to the ECHR Karolina Bubnytė seemingly commiserated that the court ruling is based on only indirect evidence and that "we were unsuccessful at convincing the court and we were not really convinced by the court."

But the court's ruling applies nonetheless, even if it does not convince the sentenced. The court has obligated Lithuania to finish the now four year long pre-trial investigation on abuse of office and illegal human trafficking over the state border, seeking to uncover and specify the guilty and punish them. Lithuania has yet to decide whether to appeal the ECHR ruling.

The whole CIA jail story brings no honour to Lithuania. From the very first news about the potential existence of the jail, most Lithuanian politicians and commentators reacted inadequately.

Some denied the existence of the jail, others urged to not over exaggerate the matter, others yet saw Russian wiles to harm the "especially close" relations between the USA and Lithuania.

While the president emphasised that Europe wonders, what Lithuania will do, a number of high officials have taken distance, claiming they knew nothing, did not agree to such a jail and so on. Former State Security Department (VSD) director and also former KGB reservist Arvydas Pocius stated that "the goal is to perhaps weaken our state's capacities to participate in international projects in both NATO and the European Union."

Former Foreign Minister Vygaudas Ušackas explained that supposedly there are more important matters in Lithuania than to deny journalist's rumours and shadow cast on Lithuania every couple of days.

In early November 2009, the Seimas directed the National Security and Defence Committee to review this question though the then committee chairman A. Anušauskas publically dismissed the information about a suspect CIA flight schedule to Vilnius. Most importantly, it was decided that the committee would release its conclusions on December 22, that is to say six weeks after its founding, ensuring that it would find nothing because it would lack time, authorisation and headquarters for a serious investigation.

Also desire. Lithuania chose to wash its hands in the hopes that others will act similarly and interest in this matter will fade. Once again, politicians were mistaken.

A detailed investigation of the secret of Antaviliai was not only a matter of Lithuanian dignity, but also of national security. There were two possibilities. Either a high-level political decision was made to allow the CIA to establish its jail or the VSD and other intelligence agencies independently and wilfully made this decision.

Former President V. Adamkus denied knowledge of the jail. He is an honourable individual and thus I am inclined to believe him. When the scandal arose, President Grybauskaitė demanded that the question of the jail would be investigated.

That a Seimas investigation was needed suggests that the president was unable to call upon VSD and other intelligence structures' leaders and immediately receive all, even the most detailed information about their cooperation with the CIA. This gives basis to think that the secret services became uncontrollable and unaccountable and thus that it was crucial to rein them in, if need be to reform them in depth.

On the other hand, there were no fundamental VSD changes, which strengthens suspicions that after all the highest Lithuanian officials one way or another agreed to the jail and that upon finding this out the president chose to remain silent.

It is worth remembering that the building in Antaviliai was built by Americans, not local construction crews, that Americans strictly controlled the territory as if it belonged to the USA and not Lithuania. Electricity to this complex was supplied by an independent generator and electrical outlets were 110 volt so that conversations could not be recorded through electrical networks.

It was necessary to coordinate special, secret flights. While such a project is impossible without the consent of responsible officials, seemingly no one knew of this, did not even try to find out who made these decisions.

The ECHR scolded Lithuania with reason that the country did not seriously investigate the question.

Lithuania has brought shame upon itself because we lacked the dignity to resist the CIA request. It must be emphasised that all the suspected secret jails were in Eastern, not Western Europe because the CIA likely suspected that mature democracies would not back their plans.

If there are plans to perform what adheres to morality and the rule of law, those plans can be performed in one's own territory and there's no reason to call upon other countries. They are only necessary if there are plans for illicit activities. The Lithuanian officials, who agreed to the CIA plans, must have understood this, though as said earlier, they may not have known or tried to not know all the details of these plans.

Whether the terror suspect held and tortured in Antaviliai may no longer be the most important question. What is more important is that something akin to this could happen in Lithuania with the consent of Lithuanian officials.

It must be investigated and publically announced, who made these decisions, to find out whether these decisions were coordinated with the president and prime minister, find out how and how much CIA activities were overseen. It is pointless to call upon US institutions once again, it is naïve to hope for Washington's confirmation or denial.

The US government's officials do not comment on the clandestine operations of the CIA. Even less so the CIA itself.

It is their right. But Lithuania must uncover, what Lithuanian officials did and why, as well as take measures that similar breaches of the rule of law would not repeat.

I am no optimist. If nothing was done over a decade, why wait for a miracle or honesty now?

The Lithuanian State Security Department , or VSD, continues to use a building near Vilnius that...

Lithuanian prosecutors say they will decide on further steps in their ongoing pre-trial investigation...

The Lithuanian government's representative at the European Court of Human Rights (ECHR) says that...

Lithuanian president on ECHR judgment: we'll have to comply

Lithuania will have to comply with the European Court of Human Rights (ECHR) judgment regarding a...