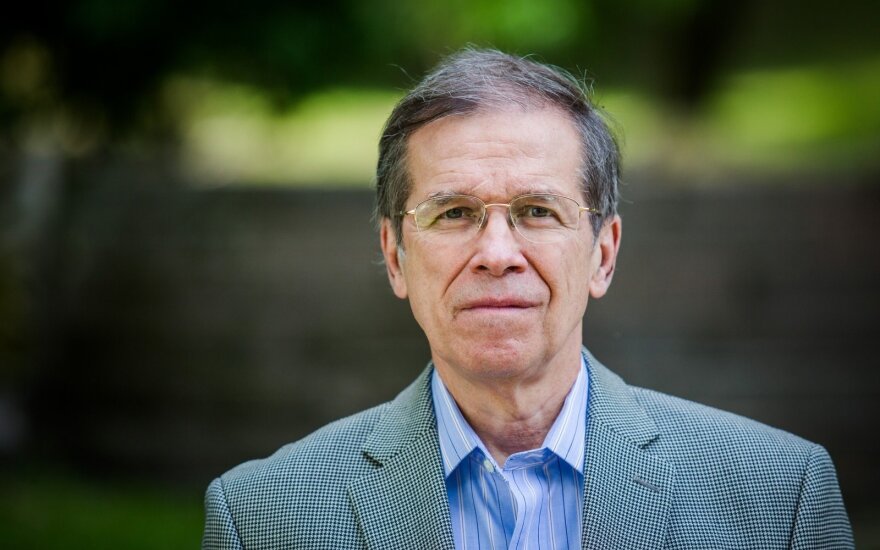 Quite often, you hear the voices of those who doubt in Lithuanian patriotism, loyalty to the country.

Caring for the state is one thing, accusing others of a lack of loyalty – is another, more difficult accusation.

Sometimes doubts are cast on an individual's patriotism just because they think otherwise about the threats posed by Russia, the European Union's supposed anti-state role, the construction of the Vytis monument, young Justinas Marcinkevičius' role in supporting the Soviet authorities, even about university subjects.

Quite recently, coordinator Arnas Simutis announced in the name of the Vilnius Forum that "it is particularly dangerous that academic political science institutions have become dangerous nests of anti-national and anti-state ideology and propaganda." Vilnius Forum statements often express concern with people's inability to resist Russian propaganda, with their confusion.

Related articles
Most Lithuanians back PM's proposal to renew political ties with Russia - BNS/RAI survey
Ž. Pavilionis. About Vovochka the neighbour and the choice: the West or the Lithuanian Schroederism?

The recently calmed Nationalists Union earlier presented itself as the guardian of patriotism.

These self-ascribed patriots concern me, especially because self-aggrandisement is linked with accusations to others.

My fellows and I are patriots and many who think differently about questions of state and nation are naïve, have bad intentions or both. Just self-ascribing patriotism reeks of arrogance. Self-ascribed patriots are similar to self-ascribed saints or individuals who hold themselves to be the peak of morality. Their confidence in their own nobility raises scepticism.

There are all sorts of professions – doctors, teachers, janitors, drivers, possibly also politicians. Patriotism is no profession, there are no professional patriots, even state service does not have positions open for them. Most professions require a specific education and knowledge, which can be obtained in higher education or other schools.

Without finishing medicine studies, you will not be a doctor. However, if you finish law school, work at a law firm or court, you are a jurist. The situation is a little more difficult with some other professions. Lithuania has philosophy departments, philosophy students and lecturers, professors who write philosophical articles and books. But we can ask whether there are any philosophers in Lithuania, if you view philosophers as being those who manage to say something new and significant on the topic of philosophy, rather just highlighting or correcting the thoughts of other thinkers.

Not only is patriotism not a profession, it is also not a taught subject. The future patriot does not have to sit this or that many hours of lectures, take relevant exams. The student, after reading books on patriotism, becoming familiar with patriotism theories, will be able to correctly answer about these theories, but this would not make them a patriot.

Patriotic, just as national, education differs from obtaining vocational skills. It can be compared to moral education, efforts to form an individual's character so that they would recognise and understand what actions under what conditions match moral requirements and would afterward act accordingly.

Usually children are familiarised with the Decalogue, but moral education is successful not when a student memorises the Ten Commandments of God or all of Kant's maxims or variants of utilitarianism, but when they act morally, when they can see and enact that which morality demands. This is a far more difficult process than the one, which ends in a diploma being granted.

If patriotic national teaching is comparable to moral teaching, if patriotism is no profession with standing rules, norms and procedures, then what do self-ascribed patriots base their conclusions about their own purity and the opponents' disloyalty, from where does this ironbound self-confidence stem from? After all life is incredibly complex and there are no patriotism or nationalism algorithms.

I do not want to claim that it is impossible to describe in general terms what a patriot is. One can claim that a patriot is faithful to their homeland, seeks the country to prosper, cares for their countrymen and their welfare, is willing to sacrifice their interests for the homeland, considers the impact on the homeland of serious decisions they make. But how exactly are these precepts accomplished and how can we distinguish, who has them and who doesn't?

There are undisputable examples of patriotism – the volunteer-founders a hundred years ago, the post-war partisans who went to the forests in the name of the homeland. We have basis to believe that youth who volunteer to the military or the riflemen are patriotically inclined and the ones who consistently avoid military service are likely not patriots. However, what do you think about the youth who entered the military thinking that it will benefit their career or seeking to complete what they view as a repelling duty as soon as possible? Moreover, another may avoid military service in the understanding they are a coward and would make a poor soldier, despite being read to sacrifice to the homeland in almost any other case.

The greatest current threat is demographic, particularly emigration. There is basis to doubt the patriotism of those who rush to depart Lithuania just for better earnings. However, you can seek to leave Lithuania in order to achieve professional development and get to know the world, all the while firmly committing to return, to bringing up children as Lithuanians, to spending holidays in Lithuania and so on. I hope that families have children not just because they feel a duty to increase the number of little Lithuanians.

I am not a supporter of the Vytis monument. The statues of the rider and horse were suitable for the XVIII and XIX centuries; they beautify all the major European cities. However, they are not suited for the now. It is unlikely whether it is possible to currently create an aesthetically appealing monument of that kind. The monument to Mindaugas is artistically worthier than Kašuba's Gediminas. I believe that the Vytis, as a symbol of the state is beginning to overshadow the tricolour and I do not agree with this. You can contest my taste and thoughts about the Vytis, but can this lead to conclusions about my patriotism or that of those thinking similarly?

A patriot can feel the duty to warn about threats to the homeland, be they from Russia or from Brussels, but can they hold those who disagree with their opinion to be traitors? Skvernelis received a drubbing for daring to state that in certain questions you have to talk to Russia. Supposedly, this is a proposal, which is disloyal to the state because it diminishes the threat of Russia, closes eyes to how pragmatic relations with Russia are fatal. What is the categorical claim about the fatality of pragmatic relations based on – a new, unannounced law of sociology? It is claimed that Russia always has been and will be an aggressive country. Earlier such talks existed about Germany and France. Why is Russia an exception and why is it unpatriotic to think that nations and states can change? Even more nonsense has been spoken about the EU, but that is another matter. It would be good if the self-ascribed patriots would not be too lazy to specify what actions they view as patriotic, which ones as non-patriotic and on what basis. Perhaps they would speak more carefully.

Ž. Pavilionis. About Vovochka the neighbour and the choice: the West or the Lithuanian Schroederism?