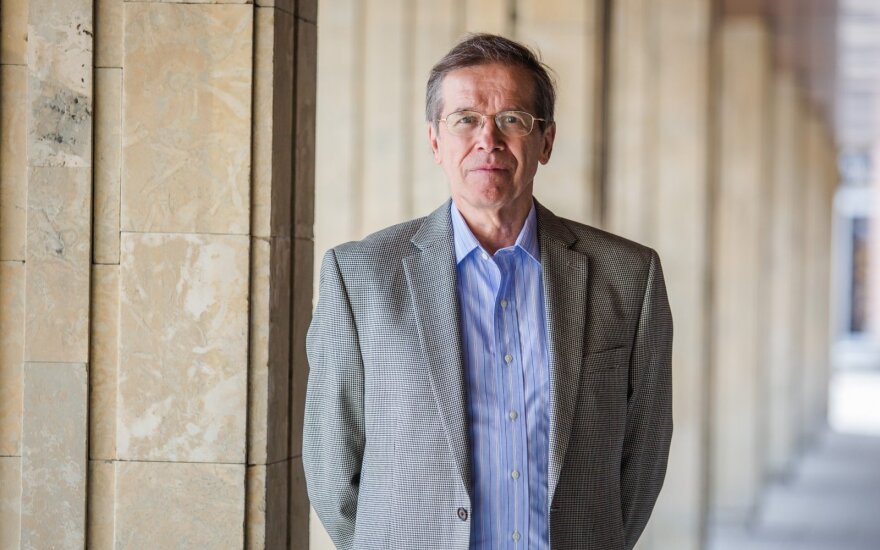 For a time now, discussions have continued for arranging a referendum on dual citizenship, changing a Constitutional article, which specifies that "except legally specified exceptions, no one can be both a citizen of the Lithuanian Republic and other states."

Current legislation almost ensures that the referendum on dual citizenship will fail because to amend the first article of the Constitution, it would be necessary to obtain more than half the vote of all citizens with the right to vote.

If 70% of Lithuanian citizens participate in the referendum (around 50% participate in the Seimas elections) and 70% of them voted in favour of the change, dual citizenship would be rejected because only 49% of all voters would have backed the change. It is necessary to remember that a significant number of Lithuanians live abroad despite remaining on the electoral rolls.

The ruling majority has registered amendments, based on which to change the first article of the Constitution regarding citizenship, only half of those participating would suffice, with no less than a third of all voters voting in favour.

The proposal is controversial because as Seimas Speaker Viktoras Pranckietis notes, with reduced requirements for a referendum, the threat arises that "later on a simplified route to change other core values of the Constitution would appear."

Nevertheless, he proposes to discuss the changes. It is hard to disagree.

The Constitution is the foundation of Lithuanian legislation, thus it should not be easily changed. But neither the document, nor its authors should be fetishized.

With the right circumstances, reasons to change the Constitution may arise. When the Constitution was drafted and passed in 1991-1992, concerns were present that with dual citizenship being legalised and Lithuanian Russians obtaining Russian citizenship, the Kremlin could interfere in Lithuanian internal affairs, supposedly defending the interests of not only its nationals, but also its citizens.

At the time expats were viewed sceptically, there weren't all that many of them, they spoke with an accent and were not viewed as "patriots".

A premise imposed by the communists remained that all true Lithuanians lived in Soviet Lithuania and those outside were figments of the nation serving foreign countries.

I recall how V. Landsbergis explained to me that expats did not have any basis to take on the citizenship of a foreign country, forgetting that not being citizens, they could not have pressured US politicians to support the Lithuanian independence case.

Why would congressmen listen to individuals, who do not even participate in US political life?

The circumstances have changed. True, the threat that Moscow will interfere in Lithuanian affairs under the guise of defending its citizens has gone nowhere, in fact, it may have risen.

On the other hand, mass migration, Lithuania "vanishing" raises a core threat to the existence of the nation. It is important to maintain links to those, who have left, create conditions that would encourage their return or to at least not turn from Lithuania.

I believe that the question of dual citizenship will be discussed by not only the Seimas, but all of civic society. It affects all of us, not just the professional politicians. At the same time, we should consider, whether it may be necessary to change precepts regarding referenda in general.

It is no secret that the government views them with suspicion, thus high requirements are presented in order to organise a referendum.

Switzerland is seemingly the greatest enthusiast of referenda, trusting in the common sense of its citizens and allows them to have their say on even the most difficult questions. Take how on Sunday the Swiss voted on a ban on commercial banks performing monetary emissions, granting the Swiss National Bank the right to print both paper and electronic money.

Three quarters of the Swiss voted against this proposal. These days, signatures have been gathered in Denmark for a referendum, which would ban the circumcision of small boys. The parliament still has to agree to the referendum and it is unlikely it will do so despite surveys showing that most Danes agree to the ban on circumcision.

Due to political correctness, corruption and various other reasons, politicians may avoid considering the most acute questions.

Based on supporters, referenda are sometimes the only means, which grants the citizenry a right to express themselves in questions of import and forces politicians to make decisions. Vox populi is not vox Dei. The people may be mistaken, case in point Brexit. Many European states are critical of referenda.

Fewer than five national referenda have been organised in Great Britain, only six in Sweden, with the latest being on EU membership in 2003 and they all were supportive. The European Union does not like referenda because citizens often reject Brussels proposals.

French and Dutch voters rejected the EU Constitution, thus it had to be scrapped. Ireland initially rejected the Treaty of Lisbon, but accepted it on a second referendum. For critics this seemed to be a lack of civic maturity.

But the results of these referenda can be understood otherwise, namely that the citizens feel that in consultations in Brussels their opinion is disregarded, thus they express their discontent by voting against core EU projects, thus against the EU itself.

As I have mentioned, the Lithuanian elite is especially negative regarding referenda. In 2014 politicians made all efforts to prevent the referendum on land sale to foreigners until the Constitutional Court, in yet another breach of the constitutional spirit, ruled that the Seimas has the duty to not declare a referendum if the referendum's proposal did not match the requirements arising from the Constitution, even if the required signatures are gathered.

Politicians made all efforts to demonise the organisers of the referendum, claimed that the voters are immature "rednecks", easily affected by demagogues, enemies of the state and otherwise, thus they must not be allowed to have the final say on the matter.

The national may be mistaken, but it does not happen often, especially in democracies, where all can speak freely. If even under these conditions we do not trust the citizens, they are not granted the right to express their opinion, how is Lithuania a democracy?

Furthermore, the people are not blind, they will answer the government's distrust with that of their own, alongside their indifference and this will weaken the foundation of the state, in the name of which referenda are opposed. The 300 thousand signature requirement should be lowered, the people allowed to express themselves.

Perhaps then progressive taxation will be implemented, other steps ensured that reduce social segregation.