Kernavė’s thunder God Perkūnas – the Leg of a Church Candlestick

Gintautas Vėlius | ldkistorija.lt
aA
A bearded, long haired man with an austere face that is depicted by a 12 cm bronze sculpture is the most famous archeological find over the last 150 years, which made Kernavė famous. The man’s nakedness is covered with a cloth kerchief which is draped over his right hand and turned over hi s hips. We see an object of unclear origins in his elevated left hand that is decorated with wavy lines; in his right hand, the man is also holding something, however only a hole in the hand remains. There is a vertical hole one and a half centimeters in diameter in the sculpture. By the middle of the 19th century, they believed that they’d found in Kernavė, a sculpture of the pagan god of Thunder, Perkūnas. 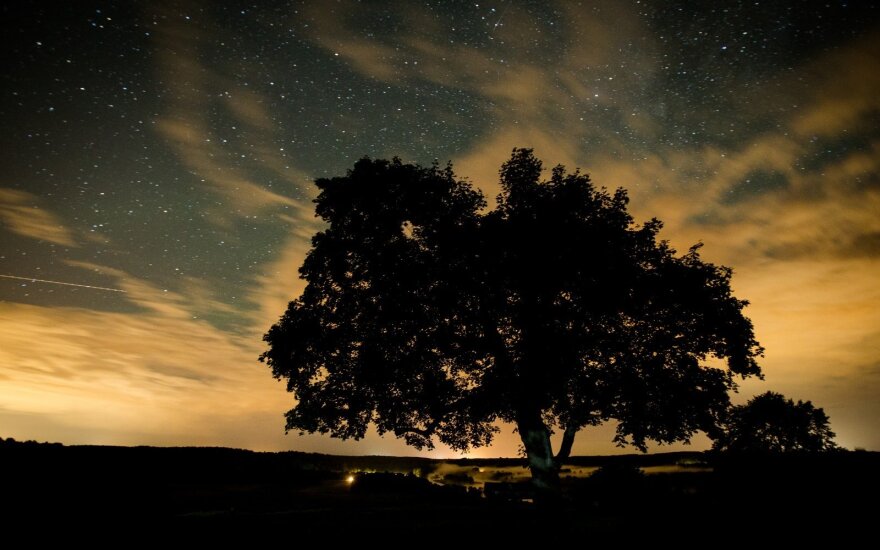 However upon a closer examination of the findings and the development of the interpretations, the only thing that can be shared is how a beautiful legend was born.

How a Finding of Unclear Origins Became a Museum Curators' Treasure

In 1855 the Museum of Antiquities was founded in Vilnius thanks to the efforts of Count Eustachijus Tiškevičius (Eustachy Tyszkiewicz, 1814–1873). A. H. Kirkor was in charge of the museum's archeological section. The Perkūnas sculpture caught the eye of scientists in 1858. The Perkūnas sculpture was placed in a number in a display catalogues of objects of the Museum of Antiquities created by A. H. Kirkor. A short explanation provided states that it is "Perkūnas, the Lithuanian God of thunder, found in the earth in Kernavė, not far from Vilnius." It is marked that the find was given over to the museum by historian and writer Józef Ignacy Kraszewski (1812–1887). Wanting to know how this impressive find ended up in the hands of Kraszewski, we looked through his work. In Kraszewski's most important work, published in 1860, which dealt with the archeological theme "Slavic art especially in Poland and pre-Christian Lithuania" (written in Polish) we find a more detailed description of the Perkūnas scuplture. It is supposed that in one hand Perkūnas is holding a bundle of thunder, while in the other, it seems, he is holding a hammer. It is noted that there is no other information on the finding of Perkūnas, just that it was found in a grave in Lithuania. Kraszewski wrote that from the same, unnamed person also received a silver sculpture, found elsewhere in Lithuania. These remarks by Kraszewski were later apparently "forgotten" by all who wrote about Perkūnas later. The data recorded by Kraszewski that he received directly from the person who found the Perkūnas sculpture are more trustworthy that that written by Kirkor later on in his catalogue of the Museum of Antiquities. Thus the Kernavė origins of the Lithuanian God of Thunder are in serious doubt.

Kernavė Through the Eyes of a Romantic

What could, in the middle of the 19th century tie Kernavė with, as was thought at the time, the sculpture of the Lithuanian God of Thunder? In the 1826 historical novel Pojata, Daughter of Lezdejko; or, Lithuania in the Fourteenth Century by Feliks Aleksander Geysztowt Bernatowicz, Kernavė was elevated with the spirit of Romanticism of the time, as one of the last citadels of paganism. Inspired by Bernatowicz, other writers of the mid-19th century viewed Kernavė in a similar way. In 1857, Tyszkiewicz described his trip along the River Neris in the following way: "On one of them (hilltop forts) the holy fire of the Eternal Hearth, worshipped by people, burned. On another, the Krivių Krivaitis, the high priest of ancient Lithuania, explained one's fate or proclaimed the will of the gods to the people. On yet another hill, was the ruler of Lithuania and a man, the reigning duke, expressing his respect for the Eternal Hearth, sending orders to the country, taking care of the citizens' rights and the country's public order." In the same year, Władysław Syrokomla (real name Ludwik Władysław Franciszek Kondratowicz, 1823–1862) visited Kernavė and attempted to make excavations on the hilltop forts. In his description of trips from Vilnius all over Lithuania, he wrote: "The Holy, or Barščių, Hill moved our imagination in particular, excited by memories of the last Krivių Krivaitis, who, with Lithuania now Christianized, received shelter with the eternal flame and its gods in Kernavė. His Sanctuary was most likely on the hill."

Archeologist and writer Petras Tarasenka (1892-1962), who began his work in an independent Lithuania, also employed the use of 19th century Romanticism and its ideas. Thanks to him the hilltop fort described by earlier authors, mythologized and called Holy Hill, was linked with the find under discussion here. Inspired by Perkūnas, Tarasenka wrote a novella called "In the Temple of Perkūnas" in 1939. The story's characters find our Perkūnas sculpture after a long search on the central hilltop fort of Kernavė (the hill fort of Aukuro Hill), which in their opinion was the location of the Perkūnas temple, though this sculpture is gold and a meter high.

"The God of Pagans" from Saxony

In this way, the bronze figure that was found from who knows where at the beginning was "placed" in Kernavė, and later, and today, on the hilltop fort known as Aukuro Hill. The problem is that the names of Kernavė's hill forts, such as Aukuro Hill, Mindaugas' Throne, Lizdeikos Hill, don't have anything to do either with pagan temples or with historical figures. They were created by authors and stuck at the beginning of the 20th century. In this case it was archeologists who became myth busters. Based on their research, the castle-residence of the duke was on the Aukuro Hill (Altar Hill) hilltop fort, while Mindaugas' Throne and Lizdeikos Hill (Lizdeika Hill) hill forts served as defensive outworks, while Pilies Hill (Castle Hill) was the location of a foot settlement inhabited by artisans. What's more, still in the 20th century the hilltop forts were simply called hills by the local inhabitants.

Lizdeika Hill was called Smailiakalnis (Sharp Hill) because of its appearance, while Aukuro Hill was called Barščių Hill because of the plants that dominated there. Mindaugas' Throne was called Pilies Hill (Castle Hill), and it is the only hill fort that we can link to a historical memory that still burns bright. However let's return to the Perkūnas sculpture. Already by the 19th century, Vilnius Interim Archaeological Commission member M. Gusev noticed new other similar figures in German museums that doubted whether the bearded man really depicted the Lithuanian god Perkūnas. Roman art expert V. Darkevičius stated in an article of his published in 1963 that according to the technique and style, the sculpture was part of a candlestick made in the city of Hildesheim, Saxony in the second half of the 13th century. Four similar statues were decorated with legs of a thick candlestick, which is why the Perkūnas sculpture has a vertical hole. It is thought that in the 13th or 14th century, Kernavė's inhabitants robbed a church during an attack in Livonia or Prussia and transported the candlestick or parts of it as bounty.

Thus the famous Perkūnas sculpture from Aukuro Hill is not Perkūnas, not from Aukuro Hill, and most likely was not found in Kernavė. But for many the bronze sculpture is an inseparable part of Kernavė's heritage, which will remain a legend that beautifully illustrates our past.

The names of Kernavė's hilltop forts, such as Aukuro Hill, Mindaugas' Throne, Lizdeikos Hill, were created by authors and stuck at the beginning of the 20th century. What's more, the local inhabitants named the hills according to their physical features. For example, Lizdeikos Hill was called Smailiakalnis Hill (Sharp Hill) because of its appearance, while Aukuro Hill was called Barščių Hill, because of the plants that dominated there. Mindaugas' Throne was called Pilies Hill (Castle Hill), and it is the only hill fort that we can link to a historical memory that still burns bright.

“For the Western reader who has no background knowledge all that seems to be happening is that crazy...

Ancient Baltic tribes revived on the shores of the Neris River

Families, youth and all others interested in Baltic Culture are invited to participate in the...