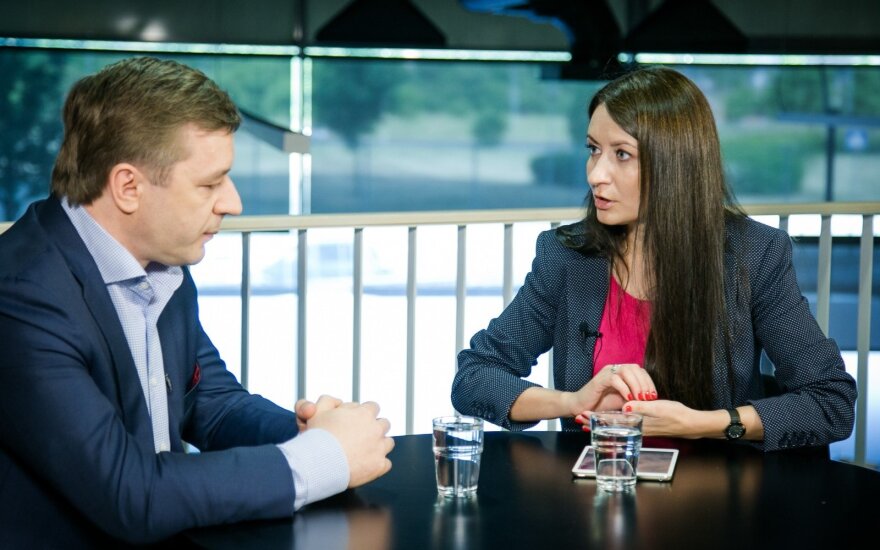 Ramūnas Karbauskis the chairman of the Peasant and Green Union has a vision: that in the future there will be no need in Lithuania for a Labour Code, and the employers and employees will discuss everything with each other and the workers themselves will be strong and able to negotiate higher salaries for themselves.

How could this happen? According to, R. Karbauskis there is only one recipe for this: for politicians to not interfere in the labour relations completely and leave everything to be solved between the employer and employee. Moreover, the strength of the employees is strengthened by strengthening the labour unions. Furthermore, the political refused to discuss any content pertaining to the Labour Code, in particular how the working conditions will change for the employees staring from July.

"In this regard the context is a question of agreement – between the employers and employees in the Tripartite Council. Thus, we try not to discuss the content" – stated R. Karbauskis in the DELFI TV studio.

Thus, is how the politician responded to the question regarding the provisions in the Labour Code regarding the change of the employment contract and the power of the employer: the refusal of an employee can become the basis for his dismissal before issuing a two week and/or month notice of termination, as well as paying severance compensation for two weeks to two months pertaining to the length of service.

"If some positions will not work the way they should, and will not work how we expect it to and will have an impact on the labour relations. A more active intervention both from the Parliament and Government can be expected but for today we cannot simply say how something will not work. I do not want to get involved in a discussion regarding content" – the politician explained.

Moreover, R. Karbauskis stated that the main achievement of the Peasant and Green Union was the "market" atmosphere removal in the Parliament in regards to how different interest groups tried to influence the Parliamentary members.

"Thus, by doing so we will remove the politicians from the work relationship" – R. Karbauskis happily noted.

According to, the politician discussion regarding the transition to a Tripartite Council has proven, but not downplayed the fact that several proposed amendments in the Parliaments where blessed by the Tripartite Council. Thus, further R. Karbauskis noted that the peasants are not at fault because of this, because both the opposition and coalition partners the social democrats have also voted in favour for.

When asked regarding the review of the Labour Code, if it would become clear that the emigration flows have not decreased and the wages do not grow and/or grow slowly, R. Karbauskis stated that he could not image that this would depend on the Labour Code.

"I cannot image how this could be a negative. Since other factors effecting the process would also be important – that would maintain and/or enhance the emigration from the state. This is some kind of global crisis, something else must happen but the labour relations in regards to the Labour Code a possible deterioration could be seen and/or the increase of emigration flows, but this will not happen" – stated the politician.

According to, R. Karbauskis the best strategy to increase wages – is to strengthen the trade unions.

Denied the fact that the redundancy of workers will become easier

Since it is foreseen in the new Labour Code for the employee to be dismissed from his/or hers place of work not only by his own fault before given a two week and/or one month notice of termination, as well as being issued two weeks and/or two months' worth of severance pay depending on the fact if the worker has worked for the employer for a year and/or less.

R. Karbauskis: Your statement that the Parliament has made it easier for employees to be made redundant is wrong.

R. Karbauskis: I appears so to me.

Question: What do you base this on?

R. Karbauskis: I just want to say one thing, that the labour unions negotiated with the employers regarding every point that they deemed to be important. The ones that they agreed upon, we have changed, while the ones that they perhaps needed a little more time to reach an agreement.... I have no information, what they did not manage to negotiate, but they will discuss the matters in the near future, if they express a need for it.

Question: Why is our statement wrong?

R. Karbauskis: Because, the information that the redundancies would become easier because of this and/or that we made something that makes them easier, from the labour unions we do not have.

Question: I will remind you that the redundancy notices have become shorter and the termination benefits have decreased. How is this not making redundancies easier?

R. Karbauskis: There are other decisions that compensate for these things.

R. Karbauskis: There are foundations being created and so on. There are simple decisions that increase the benefits and do not decrease them. I am simply returning to them, if in the timeframe of 10-20 years we will be able to live without a Labour Code and all relations between the employer and employee will be settled by negotiations between them. Than we will have normal wages and a reduction in migration, as well as we will not have all the other problems that currently plague us, especially in the regard that the politicians are interfering in matters that they really shouldn't.

The increase in prices was justified with the Euro

According to, the chairman of the Peasant and Green Union the wages in Lithuania have also increased, on the same level as the prices in the state increased after the introduction of the euro as Lithuania's national currency in 2015.

"This was perhaps an inevitable solution, but look at what it did: it increased the prices of the goods several times, as well as our commitments which today do not allow us to act differently" – noted the politician.

Moreover, while R. Karbauskis noted that the Parliament is planning on "digging-up" about 0.5 billion euros in regards to reducing poverty. The politician deeply regretted that Lithuania cannot utilize the revenue surplus collected in regards to reduce poverty, as all of the money goes to the reduction of the state debt.

"Regarding the citizens of Lithuania we need to say that we are all working and by paying taxes we are reducing the national debt of Lithuania by a few percent" – stated R. Karbauskis further adding were to encounter an economic crisis now, it would be survived much easier.

The national debt of Lithuania in 2017 will make up 43.5 pct. of the projected GDP which is one of the lowest debts.

In regards, to the tax reform plan R. Karbauskis stated that the proposal made cannot be considered as final, as they are simply presented in regards to a discussion. When asked why the idea to merge the contributions paid to "Sodra" of the employer and employee together R. Karbauskis cited the remarks made by the Minister of Finance Vilius Šapoka that this was not a common practice.

After Lithuania's parliament on Tuesday improved the new Labour Code to take effect in July, no...

New labour code up for final vote at

The Lithuanian parliament on Tuesday is to take a final vote on the Tripartite Council -approved...