Kristina Pocytė
Parašyti
autoriui
aA
“Silence about a candidate is much worse than discussions,” Lithuanian Farmer and Greens Union (LVŽS) leader Ramūnas Karbauskis says, adding that, “With a few days passing, no one remembers, what was written, but they do remember about who.” 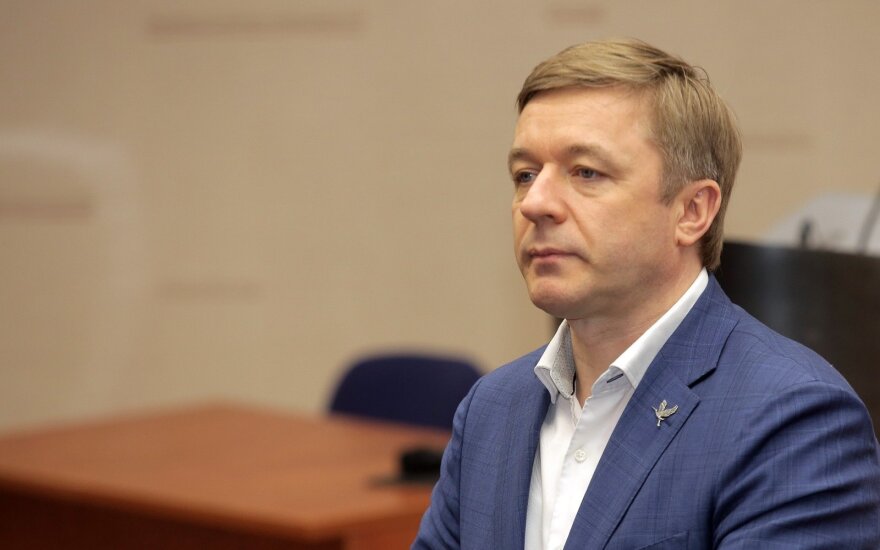 According to him, even the scandal in Klaipėda, which impacted the LVŽS due to support from businessmen related to Belarus will not have a negative impact. He also does not expect issues due to the recent teachers' strike and pensioners' discontent with belated pensions.

R. Karbauskis is convinced that the "Farmers" will win all the elections, however he does not dismiss a plan B, what would happen if the post of president is not taken by Saulius Skvernelis?

Nevertheless, he believes that the plan B will not be necessary, same as mandatory voting in elections being considered even if there are musings of it based on examples.

There are only a few days to the municipal elections and the race to gather signatures for the presidential elections has begun, where Ingrida Šimonytė has a strong lead, with Gitanas Nausėda taking second place. Arvydas Juozaitis has also passed the ten thousand signature limit, while S. Skvernelis has received only five thousand online signatures, passing only Petras Gražulis, Alfonsas Butė and Kazimieras Juraitis.

The "Farmer" leader emphasised that the trend is for support of his party to grow, while the oppositions ratings decline and that only a fraction of teachers participated in the recent strikes. At the same time, he expressed belief that the strikes themselves were spurred on by the opposition and were a political move oriented to the elections.

In terms of belated pensions, R. Karbauskis pointed out that Lithuanian Post happened to lose the tender for pension distribution this time, with a competition being organised every three years. He recounted how in December he discussed the situation with the head of "Sodra" and the minister of social security and labour, expressing concern over the change. Nevertheless, the tender was won by the company offering the lowest costs.

When talking of S. Skvernelis' bid, the politician chooses to describe Skvernelis as "the future president" and according to R. Karbauskis, this is not a tactic for the elections, but an evaluation, with S. Skvernelis having all the traits needed by a president.

R. Karbauskis points out that in terms of candidates, there are three clear favourites: Ingrida Šimonytė, S. Skvernelis and Gitanas Nausėda. He downplays G. Nausėda's bid, noting that the former bank advisor has no experience whatsoever in leading institutions. At the same time, he believes that I. Šimonytė's association to the Conservative Party will place a low ceiling on support for her and even if she withdrew, seeking for her votes to go to G. Nausėda, he would likely falter due to these. At the same time, the politician believes that if I. Šimonytė does follow through, G. Nausėda will not enter the second round of the elections, leading to a victory by S. Skvernelis. As for S. Skvernelis entering the second round of elections, the LVŽS leader has no doubts.

Furthermore, R. Karbauskis cautions that if I. Šimonytė did win the presidential elections, she could choose to not approve prime minister candidates proposed by the majority. He notes this could lead to snap Seimas elections, which he believes has been attempted by incumbent President Dalia Grybauskaitė and the opposition several times already this Seimas term.

"We are in an information environment containing everyone: the opposition, political scientists and so on. This formed over many years, it is normal. But we never had economists or political scientists, who favour us because we were never in power. And when people now read articles, where there is talk about our reforms or other matters, they see the same names: one is a former advisor to some Conservative minister, there are cases where there are targeted narratives against the LVŽS, but no disclosure about being a former advisor to Kubilius. [...]

After such attacks, after so much untruth stated about us, today we are first in both surveys alongside the Conservatives. And this shows that we should win the elections," R. Karbauskis said.

While S. Skvernelis is doing poorly in electronic signature gathering, in terms of signatures on paper, R. Karbauskis notes that while he does not have the latest figures, it will likely be 35 thousand. He states that the party focused on signatures on paper because this involves interaction with people, rather than signatures online, where there is no contact with people. At the same time, he points out that most of their party's voters are not typically online.

While R. Karbauskis refuses to discuss potential replacements for S. Skvernelis as prime minister, he believes that there will be no difficulty in finding a successor. At the same time, he says that if S. Skvernelis' bid for presidency failed, they would not seek to propose an alternative figure, even if a right-wing candidate would likely reject this candidacy.

Mindaugas Puidokas, Naglis Puteikis and Arvydas Juozaitis are expected to take a part of S. Skvernelis' votes. In this respect, R. Karbauskis notes that, "The voters are very different, but the base of people, who vote for the "Farmer" Union is very large, thus by attacking out candidate, the relative benefits are the largest.

But this is unfair because these people worked alongside us for a long time and are now simply manipulating information, thus I invite people to view everything very critically."

The LVŽS Seimas group has seen a number of departures in recent times, as well as earlier. The party's leader dismisses such individuals as selfish, raising their personal and political interests above everyone's. At the same time, he states that you would struggle to find anyone in the party's Seimas group, who is not happy to see these individuals go. To the leaving politicians' allegations that "there is no democracy in the group", the party leader simply describes such narratives as a cliché created by political scientists, who want a return of the right wing to power. Finally, R. Karbauskis expressed confidence that there would be no future departures.

While R. Karbauskis often describes the right wing as being against his party, he believes that in terms of European and world political science, his party is more right wing than the current Conservatives.

"A split has emerged in Lithuania: ring wing and left wing. The right is the Conservatives and Liberals, now also Paluckas' Social Democrats because their decisions are akin to right wing. And that's the answer: we do not have either the right or the left.

Based on Europe, we, the LVŽS, are not left wing," R. Karbauskis stated.

He admits this could be confusing for the public, but it is a matter of political maturity, something that has not been reached in the country yet, but will emerge eventually, leaving matters clearer.

In regard to mandatory voting in Lithuania, R. Karbauskis states that such a decision has not been considered and should be proposed by common agreement.

"For example, if 25-30% of voters start coming to elections, then it could be that politicians will say that this should not be. It should not be that so few people decide the future of the country, then a decision could be made – mandatory voting attendance.

Then we would have 70% attendance immediately, while the remaining 30% would choose fines.

But our public is active, the presidential elections are attended by 55% and considering how many have left, then 65-70% of those remaining in Lithuania," R. Karbauskis stated.

R. Karbauskis wants changes in his party: R. Baškienė and A. Nekrošius to no longer be his deputies

Vladimiras Laučius. The new Nausėda: lessons from Grybauskaitė and compliments from Butkevičius

A generation of young Lithuanians has nearly grown up, which has from birth listened to musings on...