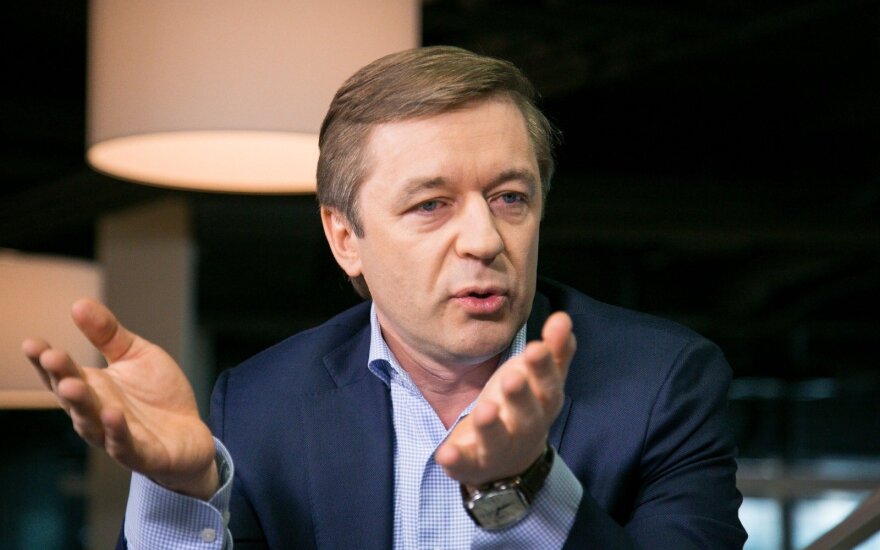 With Greta Kildišienė relinquishing her Seimas member mandate, the head of the Lithuanian Peasant and Greens Union (LVŽS) refrained from comments for a time. The politician told Delfi that he feels attacked and persecuted, with attempts to antagonise him with Prime Minister Saulius Skvernelis and explains that he would now react differently to the information on the initiated and halted criminal investigation regarding G. Kildišienė.

R. Karbauskis was highly critical of the statements made by member of Seimas Bronislovas Matelis, who withdrew from the fraction, claiming that G. Kildišienė could be blackmailing him. He claims that B. Matelis would write opinion pieces published on Delfi that were directed against his party.

“The member of Seimas was in the fraction, but he was not in it due to his beliefs. I was greatly surprised by it, I would ask him about his statements against the fraction, against his colleagues. Now with what has happened it is no longer surprising. I thought it would happen earlier. Now only one thing is clear, it is that certain comments, it would appear, are related to his personal dissatisfaction regarding the situation in Panevėžys. This is because some of his comments are laughable, talking of potential blackmail. He would appear to have some sort of dislike, dissatisfaction with the former member of Seimas and he expresses this through such fantasies, which have nothing in common with reality. It is rather unseemly for a man to do this, to take revenge this way. It looks like some sort of vengeance,” R. Karbauskis told LRT.lt.

When asked who Matelis could have been taking revenge upon this way, the politician answered briefly “Definitely not me. I can clearly see it was absolutely not me.”

R. Karbauskis about the theft – I did not know there was a 19 year old

The LVŽS Chairman also reveals that he would react rather differently now if he were to find out about the 2006 investigation regarding Greta Mikalauskaitė (later Kildišienė) who worked as an administrator in a certain company.

During the investigation it was revealed that in autumn 2005 she along with an accomplice embezzled more than 1300 Lt from their place of work. The investigation was halted because G. Kildišienė returned the funds and officially came to terms with the employer. After this information was announced the Peasant and Greens chairman stated that G. Kildišienė will relinquish her mandate, which she went on to do.

“I did not know then that she was 19 years old,” said R. Karbauskis.

When asked if he regrets his reaction, the politician explained that he does not, but that he now understands and would not react as harshly this time. At the time it looked to be the only suitable decision.

“I do not regret it. At the moment it appeared to be the only suitable decision, but afterward I found out how old she had been. That explains much. I hope that the former member of Seimas will find strength inside her and will be willing to inform society about what and how actually happened,” Karbauskis explains.

The Peasant and Greens Union chairman states he is unwilling to discuss that which only G. Kildišienė herself can talk about, but says that when you know the circumstances, which he and his lawyers only found of from the Panevėžys branch chairwoman, the story looks different.

“These are far more interesting stories. In this case however I believe that the member of Seimas herself [could explain it]. I have no right to reveal what we and the lawyers were told by her after all the decisions. It was just so that we would know that things are not exactly what they look like. It will simply be a very interesting story,” he said.

R. Karbauskis does not deny the fact of the theft itself, but says that the whole story looks rather different now.

“It is a fact. It is undeniable as a fact. Accusations were presented. When you know all the circumstances, however, how it happened, when you know the person’s age, then you understand. When the news is announced it sounds as if it was yesterday. Well, not yesterday, but only some time ago. The year was noted, but no-one tried to subtract and find how old she was then. If the same news were written a little differently, it would have had a completely different taste. Nevertheless the decision is made and is in place, it is non-negotiable. I hope the former member of Seimas will be willing to recount the story so that things would be clear,” Karbauskis says.

When asked why he did not distance himself from G. Kildišienė, the politician inquired what exactly is meant with distancing. He also believes that the question of G. Kildišienė‘s party membership can only be discussed by the Panevėžys branch which the politician leads herself. Having relinquished her Seimas member mandate Kildišienė halted her authorization as party deputy chairwoman, but remained a member of the party and the chairwoman of the Panevėžys branch.

“If in every case that someone tells some sort of story we act like this, then no members will be left in the Seimas. Not “Peasants”, not others. If we begin to remove one another this way. It was written that “it was concealed from voters”. What does concealed mean here? There was no conviction, no nothing, what does concealed mean? I am trying to understand the phrase “it was concealed from voters”. I myself reacted as we all did after reading the heading and text. Afterward, when you start to realise, you come to the conclusion that she hid nothing and first of all did not have to talk about it. On the other hand should all members of Seimas now make confessions? Who exceeded the speed limit, who did something wrong at some point? In this case let us come to agreement as a society – if you enter Seimas, you have to make a confession from the point of birth. Then everything is ok. Let us make an agreement? I believe that’s a pretty good thought here, just that you cannot put it into legislation, but perhaps in goodwill? You present your whole story from birth and then if you lie, you can attack and say they are a liar and all that,” the member of Seimas did not conceal his disappointment.

R. Karbauskis claims he believes that everyone around is seeking to morally break a person who already relinquished her mandate and took responsibility for a fact of life. He stressed that it is the first case when a person relinquishes their mandate not due to breaches of law.

“Will there be a stoning or not? It’s like the Muslim tradition… stoning,” summarised the politician.

The LVŽS chairman was, among other things, frustrated by the news media’s inquisitiveness. According to him the journalists have been to his wife’s school that she finished, spoke to his in-laws, supposedly are following his wife in Spain, photographing his house with drones and stand around with cameras.

According to B. Matelis, who left the fraction, R. Karbauskis spoke similarly in the fraction meeting – supposedly the current situation is a premeditated attack which first struck G. Kildišienė, with other members of the fraction to follow.

“A certain time will pass and you will realise this will continue. Now it will be Rima (Baškienė – Delfi), afterwards others and so on. We already know the list. For example they call and ask what Rima was doing in 2005. Or some other year. It is the exact same scenario – first, second and third,” R. Karbauskis said.

The politician was angered that journalists released data which, according to him, should be private. For a long time G. Kildišienė and R. Karbauskis refused to reveal which relative was renting the Range Rover from Karbauskis’ Agrokoncernas, but journalists revealed it was G. Kildišienė‘s mother Vladislava Mikalauskienė. Later on this was confirmed by R. Karbauskis’ deputy R. Baškienė and Agrokoncernas lawyer Evaldas Valčiukas, who showed Delfi the car rental agreement.

According to it the former kindergarten teacher V. Mikalauskienė paid 22,000 euro out of the 47,190 euro price of the car, paying most in cash brought to a bank. The lawyer stated that with the scandal starting the agreement was cancelled, but the conditions of the cancellation were not revealed.
R. Karbauskis was also unwilling to discuss the conditions of the cancellation, only saying that according to his information the vehicle was reclaimed by Agrokoncernas.

When asked if he could have acted otherwise during the story R. Karbauskis assures that he is most frustrated that journalists come across information which, according to him, should be private and protected.

“I could have. I made numerous mistakes. If I had known that the information of private individuals is so easily revealed here, irrelevant of the fact it is prohibited to do so. I should have convinced the member of Seimas and she should have convinced her family that everything needs to be revealed to avoid further doubts. That was my mistake,” explains Karbauskis.

“I did not think it is some sort of problem where a person obtains a service,” the politician added.

MP Bronius Matelis has decided to leave the political group of the ruling Lithuanian Peasant and...

Karbauskis: 'Peasants' group in Seimas 'united as never before'

The political group of the ruling Lithuanian Peasant and Green Union (LPGU) in the Seimas is...