LT Daily, media brief
aA
The leader of the Lithuanian Peasant and Greens Union (LPGU) Ramūnas Karbauskis appears to intend a serious rework of state domestic politics. The leader of the currently strongest party in Seimas has already spoken up about the need for key changes in the relationship between Seimas and the cabinet. What will R. Karbauskis’ new doctrine look like and what could it mean for Lithuania? 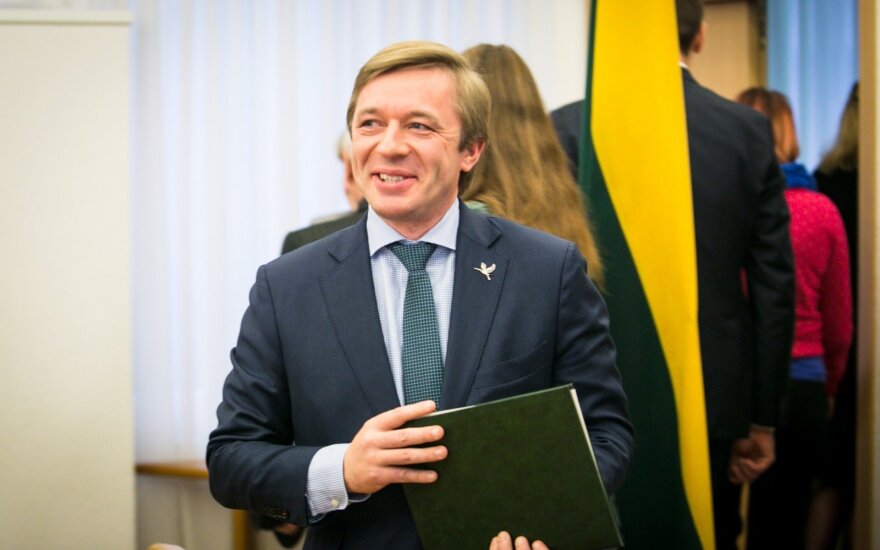 There has been much public debate on Karbauskis and the Peasant Greens’ ideas to establish a state bank, abolish the system of second stage pensions or monopolise the sales of alcoholic beverages, but what the LPGU may go down in history for could be something different altogether. During the campaign, the “Peasant” leader has continued to talk of not only changes in the economy or education, but also the Lithuanian political system.

Currently R. Karbauskis’ party proposes at least three ideas for political reform. Firstly they want to change the composition of the cabinet – it should only contain professionals as ministers, who would also not be members of Seimas as has been typically the case so far. According to Karbauskis if any of the “Peasants” proposed to be ministers were also members of Seimas, they should resign, unless they were elected in a single-mandate electoral district. Of the unofficially named LPGU candidates, only two – the potential Minister of Healthcare Aurelijus Veryga and the potential Minister of Agriculture – Bronius Markauskas were elected in single-mandate districts.

At first glance these changes could reinforce the up to now weak principle of dividing the legislative and executive branches, which overlapped somewhat in Lithuania when ministers could be members of Seimas at the same time. At the same time it will strengthen the LPGU’s positions in Seimas, ministers who have to relinquish their seats in Seimas will have to forget their political career for at least four years. In such a case “Peasant” professional ministers will be even more dependent on Karbauskis and more loyal to the Peasant Greens because their careers will depend on the party’s whims.

Furthermore the LPGU leader intends to move a number of ministries out of the capital. This should be the case for primarily the ministries of environment and agriculture, which would be moved to Kaunas. In the long term such a step could help the Peasant Greens strengthen their positions in Kaunas, where they won almost the districts in the city with assistance from city Mayor Visvaldas Matijošaitis.

R. Karbauskis is intent on shifting the centre of power from the cabinet to Seimas. This would also be something not seen in Lithuanian politics for a long time. In recent Seimas terms, the leaders of the winning parties would become Prime Ministers, while ministers brought up only legislation that was necessary to pass. Such practice is fairly typical in Western Europe as well, where parliaments often do not take an active role in preparing legislation, but instead respond to legislation proposals from their cabinets.

Back in 1994, the political scientist David Olson formed the so-called 90% rule – supposedly the majority of cabinets in democratic states propose 90% of the legislation needed for the political agenda, 90% of which are passed by parliament. Though such a view has been met with criticism, nevertheless Western European party leaders often become PMs and lead their countries from the ministerial cabinet, not their parliament.

It appears that Karbauskis is inclined to veer away from this rule. He is not planning to take any post in the executive branch and intends to only lead his Seimas fraction for now. If the cabinet is not headed by notable political personalities, but instead professionals who do not have any great political capital, they will likely show less initiative and will be more inclined to obey the tempo of reform dictated by the Seimas.

Moving political weight to the Seimas could increase the power of parliamentary control, which has been stagnant up to now because both in Seimas and in the cabinet you had essentially the same politicians, but at the same time it could bring in chaos because with R. Karbauskis only leading the fraction, he will be less capable of ensuring the political stability of the coalition. Disagreements on various political reforms and their details could turn into open clashes in parliament.

Finally R. Karbauskis seeks to change not only the relations between Seimas and the cabinet, but also to recreate a good relationship with the President Dalia Grybauskaitė. She has been highly sceptical of the work done by the government of Social Democrat Algirdas Butkevičius and stated she expects no work from his cabinet. Butkevičius himself stated in September that he had not spoken with the President since the Vijūnėlė manor scandal earlier in the year.

After the LPGU’s success in the Seimas election in the second round, President Dalia Grybauskaitė invited only the “Peasant” and Conservative representatives for meetings, showing what parties she would like to see in power. That said, while the Peasant Green’s decision to form a coalition with the Social Democrats likely did not make her happy, the President has so far withheld criticism of this decision.

Karbauskis himself seeks to “reboot” relations with the President and promises to let D. Grybauskaitė make the decision on who will be the Minister of National Defence, as well as cooperating on who will be the Minister of Foreign Affairs. A presidential controlled ministry is yet another unprecedented event in Lithuanian political history. It appears that R. Karbauskis seeks to earn D. Grybauskaitė‘s favour by sharing power in Lithuania, supposedly the President is given total control on foreign and security policy, while Karbauskis is allowed to usurp internal affairs.

Political scientist – everything will conclude as in 1992?

Political scientist Algis Krupavičius told the Alfa.lt news portal that R. Karbauskis efforts to reform the Lithuanian political system will not be rapid and one of the key indicators of whether they are serious will be whether Karbauskis manages to make ministers relinquish their seats in parliament.
“Mechanically this innovation will not be transitioned to quickly, everything will take time. One of the indicators whether Lithuania will take this path is whether amendments will really be submitted, delineating that ministers cannot also be members of Seimas. If so, then the function of controlling the cabinet will strengthen for the Seimas and ministers will no longer be able to return to the Seimas from their posts.

But either way at least in the short term, the balance of power in legislation will not experience dramatic change because the ministries still have more expert resources available, thus they will continue to provide legislation projects for Seimas which will only amend them. There shouldn’t be any ground-breaking changes here, some real change will happen, but we should expect an evolution, not a revolution,” mused the political scientist.

He also noted that the Lithuanian political system has experienced a similar situation before. That is the 1990-1992 Supreme Council – Reconstituent Seimas, where the majority of political authority was concentrated in the Seimas, not in the cabinet. Nevertheless such an arrangement was not politically stable because the Sąjūdis, which held a majority in Seimas, descended into internal bickering as the threat of a Soviet intervention decreased, with Algirdas Brazauskas’ ex-Communists returning to power in 1992.

“In contemporary history we have a time period when the parliament dominated the cabinet. That is the 1990-1992 Supreme Council – Reconstituent Seimas, which had to create a foundation for the state. At that time the Seimas was particularly influential and similar processes were happening in neighbouring countries as well. But we have to keep in mind that there were a number of crises in many of these cases, which occurred in Lithuania in 1992 when a new parliament had to be elected,” he summarised.

Karbauskis – I do not want to be a president (2)

The Lithuanian Peasant and Greens Union (LVŽS) Chairman Ramūnas Karbauskis stated he does not...

The Lithuanian parliament on Tuesday started discussions on the Labour Party 's proposal to reduce...