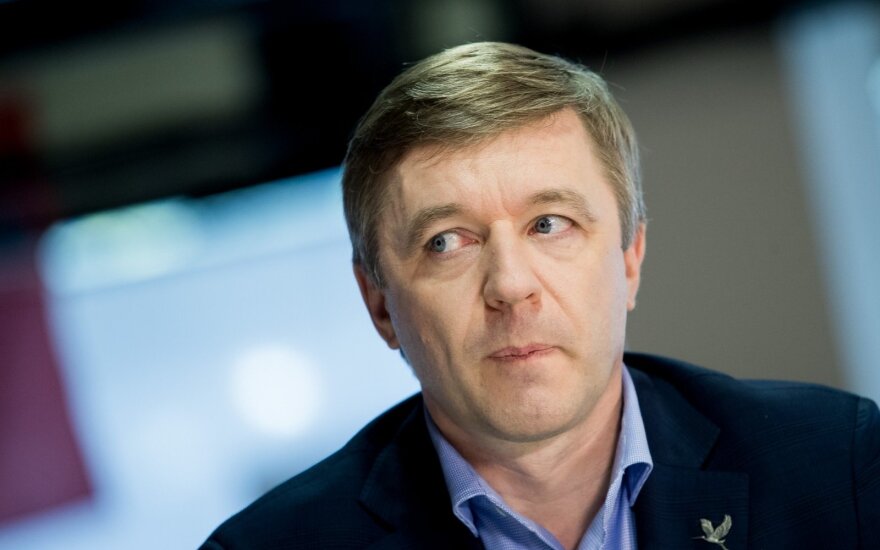 With the Seimas National Security and Defence Committee (NSGK) completing its parliamentary investigation, "Farmer" leader Ramūnas Karbauskis shared his insights on Facebook and poured on questions and accusations toward President Dalia Grybauskaitė and other politicians.

"The information presented in the NSGK conclusions is shocking. No less shocking is the fact that the highest state officials and certain politicians, who once held such positions now claim they knew nothing of this and could not have done anything," R. Karbauskis shared his reaction on social media.

The "Farmer" poured on accusations, supposedly most politicians "were bogged down in political corruption themselves" and thanked law enforcement for unveiling the situation.

"Did the prior Seimas' not have the same rights, the cabinet and president same powers as it does now? One can clearly conclude – they both could and should have, however politicians were apparently content with the situation. Even more – they were potentially bogged down in political corruption themselves. If not for principled, honest law enforcement officers, if not the new Seimas majority, the state would continue to be exploited by a handful of people, for whom honesty and morality are incomprehensible values," R. Karbauskis stated.

The LVŽS leader presented a series of questions to politicians: "I so want to ask the president now – do you truly not recall, what you wrote to E. Masiulis in those emails? To ask Andrius Kubilius, whether he will continue to deny his links to MG Baltic and Rosatom, continue to deny that his son becoming a supervisory board member has nothing to do with the decisions of the Andrius Kubilius cabinet for the energy sector in Lithuania and businesses linked to his son in Belarus? To ask Gabrielius Landsbergis whether he is simply a naïve youth or after all an arrogant head of a political party inclined to corrupt relations, who presented the party programme and discussed other questions at a restaurant together with a representative of the MG Baltic group?"

R. Karbauskis stated that a detailed further investigation is "a matter of honour for the Seimas." "I wish to calm all the sceptics and critics of the NSGK investigation conclusions – the investigation will continue. It will certainly not flounder, as it did in Lithuania previously. Now it is a matter f honour for the entire Seimas to continue it, so that everyone, who forgot their pledges to the voters and drowned the state in political corruption for many years, would be uncovered. It is time to seek renewal and seek different standards in politics. As such, I have no doubt that the Lithuanian Farmer and Greens Union will support the NSGK conclusions in Seimas.

The Seimas now has a serious basis to prepare legislation, which strengthens law enforcement capacities to prevent suspect processes. None in Seimas oppose any longer that there is need to increase politicians' responsibility for abuse of office and sale of influence. Of course, the preparedness for cardinal changes of MPs, particularly the opposition, which is linked to political corruption, will be proven by their next steps," R. Karbauskis stated.

Prior to presenting his insights, R. Karbauskis briefly also mentioned the NSGK conclusions, calling his entry "The Cleansing begins": "The Seimas National Security and Defence Committee ruled that MG Baltic representatives maintain constant connections with a former KGB officer, as well as other individuals, whose companies seek to change Lithuania's geopolitical direction.

The committee has data that Rosatom and MG Baltic seek to obtain large long-term contracts linked to strategic Lithuanian projects, thus they could be a threat to state interests.

The individuals representing the Russian corporation Rosatom and its controlled companies' interests plan to maintain Rosatom influence in the closure process of Ignalina nuclear power plant by employing the most influential business group in Lithuania – the MG Baltic group, which may seek to have an illegal influence on state institutions, politicians and (or) political processes through wide political connections and controlled media group."

After a nine-hour meeting, the committee members confirmed the investigation conclusions, which were presented to Seimas for review. Ten committee members voted in favour, with social democrat Juozas Olekas abstaining.

The conclusions of the Lithuanian parliamentary Committee on National Security and Defence probe...

Lithuania must make principled decisions and "clean" the county of companies incompatible with...