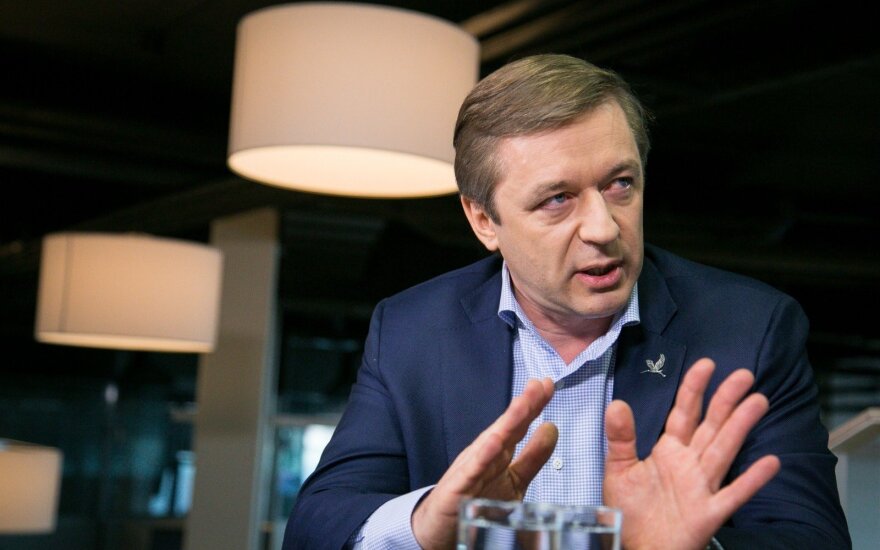 Neither the Lithuanian Peasant and Greens Union (LVŽS) representatives in government, nor their coalition partners see any indications of attempts to overthrow the government. “I definitely do not wish to use such an expression. The government and cabinet are strong. There is no way that anything would be wavering,” Prime Minister Saulius Skvernelis told LRT.lt.

During the scandal which erupted after a brief silence, LVŽS leader Ramūnas Karbauskis claimed that the uproar regarding “Peasant” Greta Kildišienė was “the first serious attempt at demolishing the government elected by the people”.

Meanwhile LVŽS representatives and coalition partners that LRT.lt has spoken to are convinced that such statements are just emotional outbursts.

S. Skvernelis does not believe everything will calm down

PM Skvernelis believes that if the story surrounding G. Kildišienė had been reacted to in time and had adequate steps taken, it would have ended otherwise.

“No doubt it is important to get used to criticism because it is necessary. It would be odd if there was no critique. But when it begins with neither Seimas, nor the cabinet getting into work, it leads on to suggest that the people voted wrongly and everything will be bad. This is not criticism. This is simply expressing a certain opinion and this story, I believe, if it was reacted to in time, as many recommended, things would have ended otherwise. It was necessary to take quick and clear steps, answer the questions and it would have concluded,” S. Skvernelis told the LRT.lt portal.

The PM has a somewhat different opinion to R. Karbauskis who claimed that the story was supposedly an attempt at overthrowing the government.

“You should ask the party chairman, who made the claim, what he thinks. When certain stories come up, various interest groups make use of them. It is natural. <…> I truly do not want to use such expressions [as R. Karbauskis]. The government and cabinet are strong, have great support from the people and the majority is also strong. There can be no talk of anything wavering. As for intent and interest that work and reform would not be performed, it comes naturally,” said S. Skvernelis.

According to the head of cabinet, this will prove just how strong and prepared to accomplish its goals this government is. “I can only say that the cabinet is not wavering and the actions that need to be made, it will do,” Skvernelis said.

However the Prime Minister noted that he does not believe the story will end with G. Kildišienė relinquishing her mandate, stating that “I do not believe it will calm down [the scandal]. Yes, this story has run its course, a painful decision was made, speaking of the member of Seimas, but in this situation no other decision could be made. However we have not had a moment to relax and we will not get one. It is a sort of challenge.

A. Butkevičius – the media did its job

Former Prime Minister, Chairman of the Lithuanian Social Democrat Party (LSDP) Algirdas Butkevičius says he also has no information of anyone trying to overthrow the government. “Perhaps some may always have such thoughts, they may be dissatisfied and wish for certain political upheaval. I do not believe it was some sort of intentionally manufactured programme, which would have had to be accomplished over a brief period. I am not inclined to believe that someone would aim to overthrow the government,” Butkevičius told LRT.lt.

According to the LSDP leader the government is mostly formed by a massive new fraction and some of its members have never faced such criticism. “Perhaps they thought that the euphoria experienced during the election campaign and during the formation of the cabinet and coalition would continue for four years. That would never happen and it was not come to terms with. Many members of Seimas were elected for the first time. There was an avalanche of criticism, causing widespread confusion in the LVŽS,” the former PM explained.

According to the politician, during the whole story with G. Kildišienė the media “had a strong performance”.

“I would recommend to calm emotions. What is needed is a calm sit down and thinking what to do. Firstly regroup inside the party and then continue solid and responsible work on questions pertinent to our state,” Butkevičius told LRT.lt.

LVŽS member of Seimas Dovilė Šakalienė also holds R. Karbauskis’ statements to be based on emotions.

“I believe that these are emotions. Of course there is massive stress and not doubt it must be hard on Ramūnas. I do believe however that after calming down and thinking he will separate those things – the breach of law and political ethics and reputation questions. After all if regular citizens breach the law they are penalised through administrative or penal means and politicians have twice the bar to uphold compared to regular citizens,” said the member of Seimas.

“In this case information not being released on time, unwillingness to openly admit that there is a problem with the transparency of the information, accuracy; some of the unanswered questions show our fractions unpreparedness to transparently and openly lead the government.

I personally find the way this situation developed particularly unpleasant and truly painful. I would say that G. Kildišienė’s decision to relinquish her mandate is far more mature than R. Karbauskis’ reaction. I applaud the decision made by G. Kildišienė, which was the only possible and honest one to make in this situation. Speaking of Ramūnas, I believe he needs time to gather himself and realise that in this case the news media and the opposition performed their roles. It could not have been otherwise,” Šakalienė told LRT.lt.

With LRT.lt asking whether she believes someone is trying to overthrow the government, the politician answered “No, definitely no. I believe that is not the case. I am learning to understand politics myself. Sometimes problems and mistakes that politicians make are sought out, but this is a guarantee of transparency. If everyone was blind to what was happening, we would not have a democratic control mechanism. We have to be prepared that every decision of ours can be reviewed.

We need to understand that we have to answer for our mistakes and that for politicians to not reveal information or not informing of it in time is just as much a mistake as breaching the law. We have lost our personal lives, our privacy, on the day we chose to participate in the Seimas elections. When we decided to take responsibility for three million Lithuanian citizens. That is all.”

Ethics chief refuses to step down