Karbauskis and Skvernelis – whose prospects in politics are better? 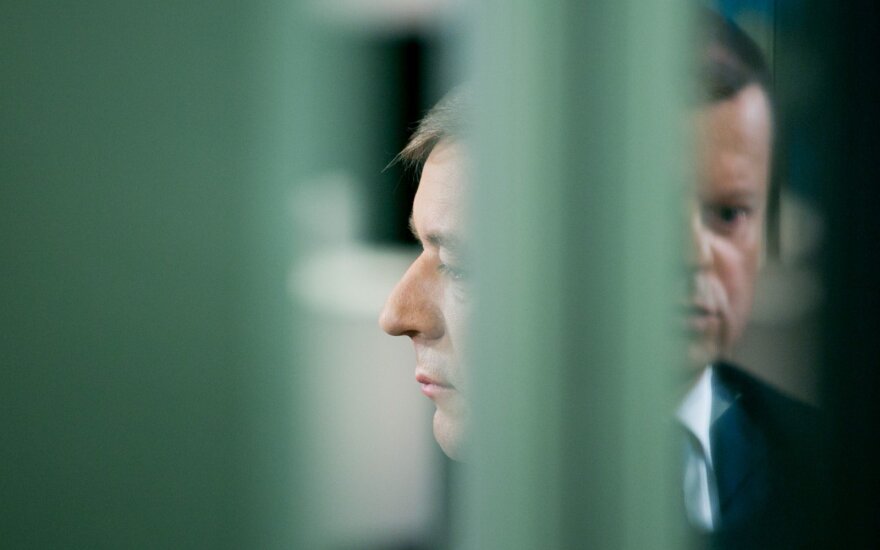 Unsuccessful leadership of the cabinet would also be a fiasco for Prime Minister Saulius Skvernelis as a politician in general, thus he has far more at stake than “Peasant” leader Ramūnas Karbauskis. The latter, according to analysts, despite appearing vulnerable will still demonstrate his influence. “S. Skvernelis has so far not displayed his weaknesses. But his weakness is that he miscalculated and “bit” R. Karbauskis. I believe this could ruin him,” political analyst Indrė Makaraitytė told LRT.lt

The scandal of Greta Kildišienė, who has now withdrawn from Seimas, has impacted both the ratings of the Lithuanian Peasant and Greens Union (LVŽ) and its leader R. Karbauskis, whose ratings decreased by 6%. According to data from the latest survey by Vilmorus R. Karbauskis is viewed positively by 46.3% of respondents, while a month ago the number was at 51.7%.
Meanwhile for Prime Minister Skvernelis the LVŽS member’s scandal had little influence.

Skvernelis’ approval rating remains the same as in December – 68.3%
Furthermore when R. Karbauskis has declared that the uproar caused because of G. Kildišienė was “the first serious attempt to demolish a government elected by the people” S. Skvernelis responded that “Such extreme responses are unnecessary.”

This is not the only division to appear between the two comrades. How will their relations develop and whose prospects in politics are better?

S. Skvernelis – a PM to a majority in R. Karbauskis’ hands

Mykolas Romeris University (MRU) political scientist Rima Urbonaitė notes that S. Skvernelis’ ratigns have always exceeded R. Karbauskis’ and he was one of the reasons for the “Peasants” victory.

“The two headed dragon of R. Karbauskis and S. Skvernelis always worked. However S. Skvernelis’ popularity has greater potential. On the other hand PMs always risk scattering their mandate of confidence. Everything will depend on what the cabinet looks like after at least half a year. At that point the contours of specific work should begin appearing. S. Skvernelis’ ratings are not “made out of Teflon”. Algirdas Butkevičius‘ ratings also remained high for a long time, but the elections proved they were not monolithic,” R. Urbonaitė reminded.

Meanwhile R. Karbauskis’ situation is altogether different, the expert observes. This is because the Seimas’ image is so far not improving which could impact his ratings.

“The situation with G. Kildišienė is a blemish on the whole term. Problems arose immediately and they are not disappearing at all with every interview R. Karbauskis takes. For now I find it hard to explain what it is, but every interview far from improves R. Karbauskis’ image, rather it worsens it. It would appear that R. Karbauskis does not prepare at all prior to talking with the media and this can impact his ratings. There is light chaos in the Seimas and the voters, it would appear, are pinning their hopes to the cabinet more,” Urbonaitė told LRT.lt.

Political analyst I. Makaraitytė reminds that public opinion research does not always reflect reality.
“Yes, S. Skvernelis is the PM, but he is the PM to a majority in R. Karbauskis’ hands, not S. Skvernelis’. There are talks that if conflict occurred or if the political power fractured into two, supposedly the majority would follow Skvernelis. I greatly doubt this because all the resources and victory, at least within the fraction, is linked more with Karbauskis, not Skvernelis. Yes, S. Skvernelis was a major factor in the “Peasant” victory, but R. Karbauskis put in the work, Naisiai. Furthermore the funds. That is something S. Skvernelis definitely did not haven,” I. Makaraitytė told LRT.lt.

G. Dabašinskas: almost none of the “Peasants” helped R. Karbauskis

Analyst Ginas Dabašinskas says that the LVŽS is not fully formed. This, according to the analyst, has had negative consequences during scandals.

“In this case, given the unstable situation, personal traits of the politicians, ambitions, interests and other emotional factors play a far greater role than when the structure has settled. Of course individuals are still meaningful then, but the structure dampens various movements. In the story we observed the leader constantly spoke for himself and others, explaining the situation. But almost none of the influential party members helped R. Karbauskis resolve the problems,” Dabašinskas explained, adding that an important role was performed by Rima Baškienė “She is from the old party structure, while all others neither got involved, nor anything else.”

G. Dabašinskas also notes that S. Skvernelis took up a fairly reserved position and this was noticed by everyone. “No complaints were levied against him. You cannot demand him to take up some sort of defensive position, but his remoteness was visible. It is a question whether this was a strategic move,” he mused.

The analyst observes that S. Skvernelis is an excellent tactician and administrator. “This is a man who entered politics not because he was preparing for it for a long time, simply a suitable situation appeared. Such a tactically thinking individual appeared very useful for R. Karbauskis because he complements his traits, helps him resolve specific tasks. R. Karbauskis changes his opinion, tries to evade, perhaps he sees the goal, but he needs help in resolving specific tasks.

R. Karbauskis is trying to take up an excellent position among various sources of influence, but he does not appear to be doing well. S. Skvernelis seemingly guaranteed it for him, but as a non-partisan person, not as a person resolving his own tactical objectives,” G. Dabašinskas told LRT.lt.
The news media and public sphere show, according to G. Dabašinskas, that these are two very different people with differing experiences. They have become acquainted fairly recently, their political goals and ambitions are not in line yet.

“They have to live and work in this environment. Currently S. Skvernelis’ situation is far more favourable. He needs to accomplish specific tasks and not get involved in the political public relations story, however in the longer term his perspectives will become more difficult.

After half a year the question will arise as to what the cabinet has achieved. For now he can manoeuvre without getting hit, but it is a matter of time. S. Skvernelis is greatly dependent on the current situation. If his role as PM is not successful, then his future as a politician will be unclear. S. Skvernelis’ fiasco at the post of the cabinet leader would also be his fiasco as a politician, thus he risks far more than “Peasant” leader Ramūnas Karbauskis,” Dabašinskas explained to LRT.lt.

On Karbauskis‘ business interests in Lithuania

The scandal surrounding car lease and relationship with MP Greta Kildišienė has affected the...