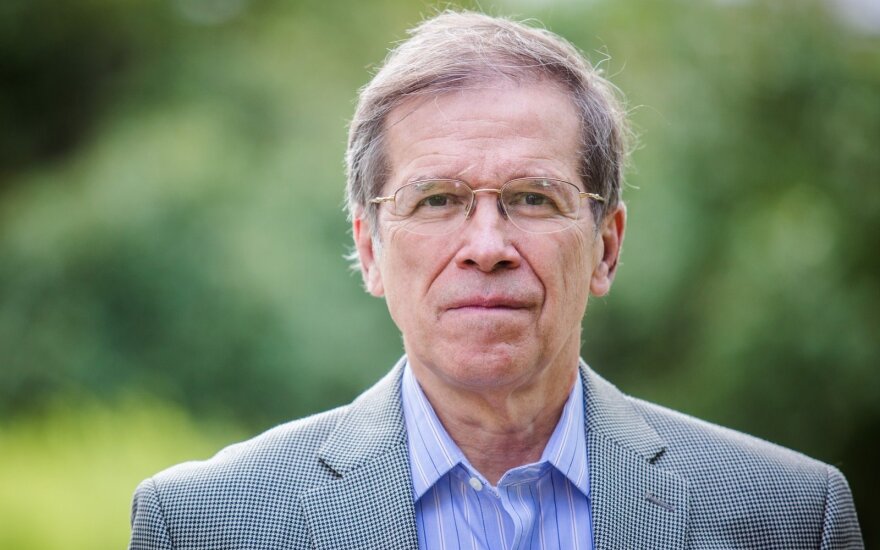 Donald Trump has been president for half a year now. He has little to celebrate or be proud of. His popularity is declining despite continuing support from Republican Party members.

A siege mentality has descended on the White House, the Trump team's members with Russia are under investigation by several Congress committees and a special counsel. While Trump often touts that his administration is particularly effective, he has been struggling to accomplish his chief program pledges – attempts to overhaul the healthcare system have failed, taxes have not been reformed, there isn't a cent in sight of the billions promised for US infrastructural development and the creation of jobs. There are those asking whether he is the worst US president ever. But a number of Lithuanian politicians view Trump positively. Why?

Related articles
Linkevičius: discussions with Trump‘s entourage are much better than with previous presidents
Lithuania's president supports new US sanctions for Russia at Tallinn meeting with Pence

The primary reaction in Lithuania over Trump's victory was marked by concerns for the future. There was particular attention dedicated to Trump's statements on Russia and NATO, questions whether he will seek to appease Russia, cancel support for Ukraine and weaken NATO. Concerns were increased by his statement that NATO is an aged organisation and also that he was particularly unwilling to reconfirm the US' commitment to NATO article 5 for a long period of time. Worries were also raised by a lack of links with Trump's team.

Finally there was the ever present concern that Lithuania will once again be betrayed and left alone up to Russia's will. It is worth recalling that one of the reasons why President Dalia Grybauskaitė refused to go to Prague to meet President Obama was her concerns that Obama will announce political initiatives that would be harmful for Eastern and Central European countries and that her participation could be understood as consent. That said it was not just the Lithuanians who were sceptical of the new president's potential Russia policy. Rumours abounded in other countries that NATO accelerated the deployment of battalions in the Baltics and Poland in order to present Trump with an established fact.

Fear has big eyes, thus there was little attention dedicated to the new Secretary of Defence being James Mattis and national security advisor being Herbert Raymond McMaster, both former generals, as well as CIA director Mike Pompeo. All being foreign policy "hawks", particularly hostile toward Russia. It was forgotten that US defence policy is like a massive aircraft carrier whose course is hard to change even if one wishes to. And there are few who would want to. Most congressmen have little trust in Russia and viewed Trump's intentions to improve relations with Putin with scepticism, particularly with Russian tampering in the US elections coming to light. The Congress voted to assign the Pentagon 587 billion US dollars for the coming fiscal year, including 3.4 billion dollars for actions to "halt Russia". It will soon pass legislation which toughens sanctions on Iran and Russia, as well as specifies that the President cannot unilaterally soften current sanctions on Moscow.

With a suspected buddy of Putin's in the presidency, the USA decided to strengthen NATO, significantly increase defence spending and apply stricter sanctions on Russia. The situation is not changed by these steps being more due to Putin's, rather than Trump's actions. Even the hawkish US senator John McCain, who is popular in Lithuania, would be satisfied with such changes though he would perhaps want to also arm Ukraine and even fulfill President Grybauskaitė's dream of deploying long range anti-aircraft and anti-missile systems "Patriot" in the Baltic region.

About a week ago Minister of Foreign Affairs Linas Linkevičius sang praises for Trump and his team during an interview with LRT. "I had never before had such a quality and concrete discussion as that with national security advisor Herbert Raymond McMaster. Specific and conclusive, with a vision for the future and such." When it was noted that Trump's team is not Trump himself, who often changes his mind, Linkevičius stressed that "the president, it would appear, is receptive to his environment and he adjusts those positions." And then outlined how often the highest ranking US officials have been visiting the Baltics and Poland as of late. He suggested that the German Chancellor Angela Merkel's comments that the EU can no longer trust others, basically the USA, and has to rely on its own strength more, is linked to the German parliamentary elections. Linkevičius is not only the Minister of Foreign Affairs, but also linked with the president, thus it is plausible that Grybauskaitė's thinking is similar. Most Conservatives such as Audronius Ažubalis, Laurynas Kasčiūnas and Žygimantas Pavilionis are even greater US enthusiasts. The supposed friend of Putin became a friend of Lithuania.

Defence and security matters have gone in a positive direction for Lithuania. Lithuania was not just an observer of events, but also a participant, tenaciously demanding that NATO would prepare tangible and detailed defence plans for the Baltic States, would deploy its troops in the Baltics and would take up other means which would convince the Kremlin that the countries will be defended. Attention to the Baltic States is real, but it is related with attention for all of Europe and NATO.

I have no doubt that Trump knows very little of Lithuania, has little interest in it and has at least once thought he could buy it. Neither does he care about the other Eastern European countries. The commitment to defend Lithuania will be firm as long as the commitment to NATO remains such. While certain statements and actions by Trump cause indignation, the reaction of EU leaders is so far inadequate, soaked in emotion and undisguised disappointment that Trump is not what they would want. Former US Minister of Defence D. Rumsfeld once said that you go to war with the army you have, not the army you might want or wish to have at a later time. A similar logic applies to US presidents. Merkel's hint that perhaps it will no longer be possible to rely on the USA is hypocritical. Actions matter more than words and Germany is shamelessly not reaching its commitment to maintain 2% GDP in defence spending. If the US and other NATO members acted like Berlin, there would be nothing to defend Europe with. Neither suitably armies, nor weaponry. Donald Tusk, Jean Claude Juncker and certain other EU politicians do not disguise their contempt of Trump, even if it takes neither imagination, nor wisdom to criticise him. During the NATO meeting the heads of other states attempted to demonstratively avoid Trump, but when he responded by spending a long time in discussions with Putin during the G-20 meeting, there were complaints that this was an affront to allies. The inconsistency and pettiness is obvious.

The USA is an irreplaceable partner of Europe even with Trump as president. French President Emmanuel Macron understands this well. During the first meeting he openly challenged Trump, but then invited him to France for the Bastille Day celebrations. A friendly and mutually beneficial relationship was established. Lithuania should support such initiatives, not blindly support German preachers. Instead of permanently attacking Russia, Linkevičius could talk with his colleagues like he did during the aforementioned interview. That apparently we should celebrate and value what has been achieved.

The second rotation of German troops is coming to Lithuania to head the NATO enhanced Forward...

Pavilionis - Trump’s message to the world – hear out our region