Marius Sirutavičius | ldkistorija.lt
aA
After the State of Moscow, which grew into the Russian Empire in later ages, became the centre of Slavic statehood, Lithuania acquired a fierce rival with whom more than once it had to fight both on the battlefield and with the help of diplomatic measures. In the 15th -16th centuries, tension between the states determined not only the problems of foreign policy but also diplomatic contacts. 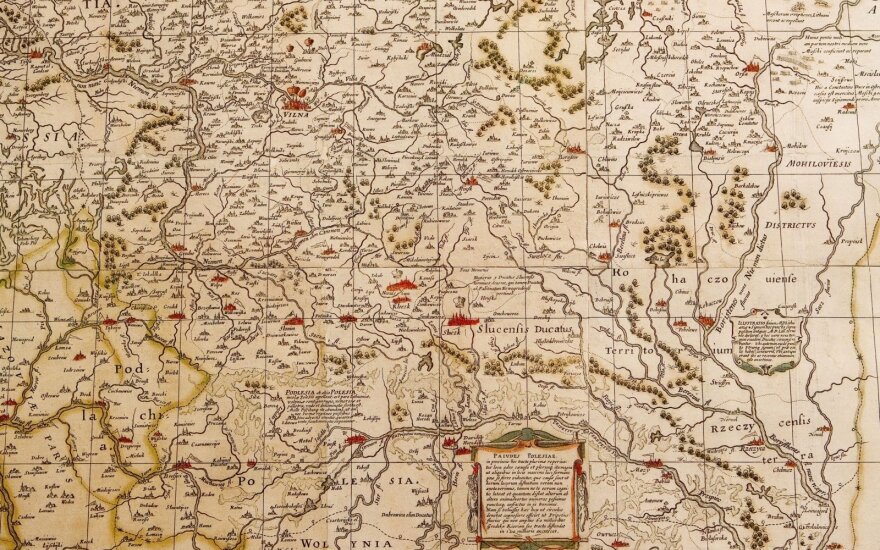 Map of the Grand Duchy of Lithuania
© DELFI / Kiril Čachovskij

Meanwhile, due to mutual distrust and hostility the medieval procedure for exchanging diplomatic missions still prevailed in the diplomatic practice of the relations between the Grand Duchy of Lithuania and the State of Moscow – missions were sent to carry out a specific diplomatic mission. Upon its completion, diplomatic authorised agents returned to their countries. Due to this practice, journeys from the capital of one's own country to the main city of another country were a significant part of the activity of the missions. In the long run, the journeys between the states were consigned to permanent routes based on old trade lanes. Seeking to avoid spying (collection of information was one of the envoys' oldest functions) the movement of the mission travelling across the territory of another state was strictly controlled. Local officials were tasked with watching that foreigners would not divert from the fixed route and would not communicate with the population.

Related articles
The Commonwealth Educational Commission: a new approach to teachers and education
When the leaders of the Commonwealth and Russian Empire met in Biržai for entertainment and secret agreements

Diplomatic thread between Vilnius and Moscow

Lithuania's envoys, having received instructions from the Ruler and the state officials, most often started their journey to Moscow from Vilnius (through Medininkai, Ašmena) and moved in the direction of Minsk. Later they continued their journey as far as the GDL border town of Orsha stopping on the way at Borisov and Druck (the route of the journey Ašmena–Orsha is in the territory of current Republic of Belarus). This route across the territory of the Grand Duchy of Lithuania was mapped out after the military clashes in 1512-1514 when an important strategic point of the country and the place where roads intersected – Smolensk – was passed on to Moscow. Then the border of both states was established, which, despite temporary changes, remained the same throughout the 16th century. The permanent route of the missions became established for a long time.

Orsha was the last point in the journey of Lithuania's mission in the lands of its state. From there, Lithuanian diplomats continued their journey across the territory of the State of Moscow. Similarly to other countries, an old custom prevailed in the diplomatic practice of Lithuania and Moscow to welcome the envoys on the state border. Every diplomatic mission of the Grand Duchy of Lithuania had to inform the Governor of Smolensk about its approach in advance, indicate the address, rank and composition of the mission. The rank of the mission determined the diplomats' reception: the higher the rank and the social status of the envoys were, the more respectfully they were treated during their journey. Having crossed the border the diplomatic mission moved in the direction of Smolensk. However, the Muscovites only permitted the Lithuanian envoys entry to Smolensk, which had strategic importance as a military fortification on the border, during peacetime. Most often the members of the mission were accommodated in the environs of Smolensk from where they continued their journey in the direction of Moscow. On its way the diplomatic mission most often stopped at Dorogobuž, Viazma and Možaisk. The points on the route were important for the provision and lodging. The higher the rank of the envoys and the authorisations granted to them, the larger in number was their escort. Sometimes it amounted to 300-500 persons. The number of Moscow officials and their escort accompanying the mission was also large.

Ceremony of welcoming the envoys: Russian eloquence and Lithuanian reticence

The last stop of the mission was in the environs of the capital. The courtiers with an escort arrived from the city to meet the mission. The members of the diplomatic mission and the welcoming procession lined up in two rows between which the envoys and the most important participants of the welcoming party stood. At that time caps were taken off and horses were dismounted, the visitors listened to the greetings expressed on behalf of the Ruler by the highest-ranking participant in the welcoming ceremony. When welcoming the visits the following was said: "Our Ruler [...LEFT_BRACKET, in God's grace, the Ruler of all Russia and Grand Duke asked us to bow to you". Then a formal question about the journey followed: "We were told by our Ruler [...] to enquire you about your health: did you have a good journey"? The ceremony was ended with announcing to the members of the mission about the patronage and hospitality of the receiving monarch: "The Ruler of all Russia and the Grand Duke told us to show the mission home to you and provide you with food." The visitors thanked the Ruler of Moscow for their successful journey. When the meeting was over all mounted the horses and continued their journey along the streets of Moscow as far as the place of accommodation.

The Russian missions took the same road when they travelled to Lithuania. The officials of the Grand Duke of Lithuania met the mission of the Muscovites travelling to Vilnius several versts from Orsha (in the 18th century one verst was about 1 066,781 metres (1,067 km)). Further the mission accompanied by the local officials followed the route that had been planned in advance, stopping at Druck, Borisov, Minsk and smaller settlements on their way. The envoys' entering Vilnius was notable for its special solemnity. The welcoming procedures in Lithuania were simplified: it sufficed to take off the caps, the horses were not dismounted. On behalf of the Grand Duke the receiving party enquired the envoys about their health, how their journey was. Following these procedures the visitors were accompanied along the streets of Vilnius as far as the place of accommodation. The diplomatic missions' routes were strictly monitored therefore the visitors turned off the usual road only when the Ruler did not reside in the capital. The representatives of the Lithuanian missions sometimes had to change their final destination when the monarchs of Moscow had left for the city of Naugard (now Nowogard), Tver or Aleksandrovskaya Sloboda. Moscow envoys had to change their plans more often. With Lithuanian Rulers who at the same time were Kings of Poland, residing by turns now in one now in another state, the Muscovites were never sure that they would be received in Vilnius. Therefore sometimes the route of their journey ran as far as Grodno, another town of the Grand Duchy of Lithuania, or even as far as Krakow.

A fragile link with the West

The road linking Vilnius and Moscow had international significance as well. It was not only a channel of diplomatic communications between the Grand Duchy of Lithuania and the State of Moscow but also a part of the route of the exchange of diplomatic missions of Moscow, the countries of Middle and Western Europe. Its large section ran through the territory of Lithuania. Vilnius could control the relations of the State of Moscow in the direction of the West. The representatives of Moscow had to obtain a permit to travel trough the territory of Lithuania. Other countries, which decided to send their diplomatic missions to Moscow, had to procure this document too. That was a common and long-time practice of confirming journeys. If Lithuania decided to block or complicate the relations of the State of Moscow with other countries, the Muscovites and their diplomatic partners sometimes encountered problems. An obligatory visit to Vilnius was provided for in the travelling regulations. That made the supervision of the movement of diplomatic missions in Lithuania easier and created conditions for controlling the relations between Moscow and its diplomatic partners. Even the slightest non-compliance with the established procedure was treated as a violation of travelling regulations on account of which a further journey of the diplomatic mission could be restricted. Hence, the old trade route linking the capitals of the Grand Duchy of Lithuania and the State of Moscow played an important role not only in bilateral contacts but also in international relations.