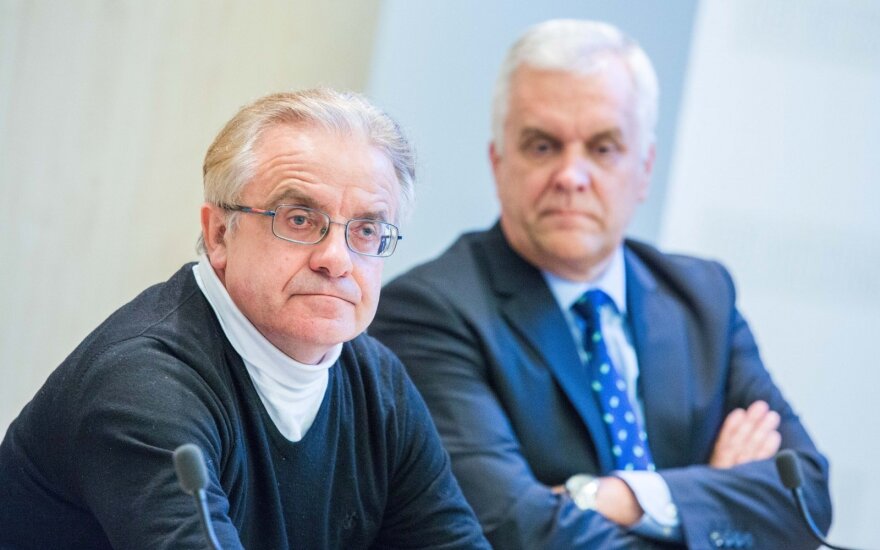 The current politics is useful for the elite to survive and the politicians to show off but not to solve problems and make decisions, Vilnius University professor Alvydas Jokubaitis says to LRT.lt .

This is concentrated only on everyday issues, and philosophers Vytautas Radžvilas and Gintautas Mažeikis agree on that but, according to them, the responsibility should be taken by the media as well, because the key issues that it covers become important to the politicians fur, rather than necessary reforms.

Recently, the public space has been talking about Greta Kildišienė's, former MP, furs and car, Mindaugas Bastys, who is an MP, possible relations with Russian companies and the criminal community, MP Gintaras Steponavičius possible links with „MG Baltic" , MP Andrius Kubilius car renting and etc. Why the country's policy is aimed at law enforcement issues, even though the ruling coalition has promised fundamental changes necessary for Lithuania and has just started?

Related articles
V. Radžvilas: a disaster has come already and we can‘t hide it
Why is Lithuania lacking real Social Democrats?

Acts in a play, which is called reforms

Vytautas Magnus University professor and philosopher G. Mažeikis says that Lithuanian politics is focused mainly on everyday issues but it's not all.

"This means that people, who cannot articulate other questions are talking in the public. People, who are able to talk about the existing problems are rarely seen. Are there such people? We don't see the discussion. The discussed issues may give the impression that nothing important happens Lithuania, everyone is stalling, everyday things are cast a shadow on issues, "- said G. Mažeikis.

According to the VMU professor if an accident was to happen that is related to children, of social workers and the various authorities responsible for the safety of children are remembered. However, educational system and the issues of raising kids are not addressed. "We are unable to solve the issue fully and taking a case of only one child, who is extremely important, but after a few days everything is forgotten but the main problem remains," - explained G. Mažeikis.

Vilnius University (VU) Professor of International Relations and Political Science Institute A. Jokubaitis said to LRT.lt that the current policy is useful to the elite and politicians to sow themselves.

"People elect their representatives but they do not see themselves in those people. In addition, they don't know what they are doing. Elected representatives have come up with what to do, and because they can't come up with something, they want to indulge the people who elected them. They begin to act in a play called reforms but in fact they are looking for a scandal. They mix up the places of the performers of symphonic orchestra performers and think that it will perform better, here I am talking about shorter school holidays or bans on alcohol.

The authorities have no idea what needs to be done. Then, instead of political decisions that are expected of them, they begin to make decisions that are directed to the public opinion, making themselves visible, but not actually solving issues but no problems ", - said A. Jokubaitis.

According to A. Jokubaitis elite lives great and the people, who created it with their own hands, now have to fight against it, but have neither the strength nor the wish. "The situation - dramatic" - summed up the VU professor.

V. Radžvilas: the media reflects the provisions of a small group of people

VU TPSMI philosopher and Professor V. Radžvilas argues that if the various disputes can be called a debate, then we have turned into the country, where everyone in the public talks only about the details, and the important issues are not raised.

"Looking at the Lithuanian media image, it can be said that it is pretty stifling. A question can be raised on whether the longer I observe the Lithuanian media, the impression that that the media is not free gets stronger. However, a skilfully supported freedom and pluralism can be seen in there.

We forget that state media censorship and supervision is not the only form of control. Self-censorship is possible, which means that the media, which claims to reflect public opinion, actually reflects an opinion of a very small group of people who manage the provisions "- said V. Radžvilas.

In his words, there is no shortage of entertainment shows or style shows, but social issues are not talked about: "We see the so-called elite life and displays of social problems of degraded people. At that time, we never heard about low wages, which worries many citizens. One gets the impression that these programs and topics are chosen in order to divert attention from the key issues ", - explained V. Radžvilas.

VMU professor G. Mažeikis also notes that some important issues are not discussed in the media, but are talked about in social networks or in closed groups. "A small group forms, which may be talk about social problems or answer some political questions. [...] We can see that the media not always reveals educational, social, health and other important issues. Which media shows objectively the Lithuanian-Polish relations and which cannot do it? "- said G. Mažeikis.

He said that it is right to primitively blame the media. However, there is a principle that politicians are a reflection of society and if they are poorly informed, they live with the problems on a household level.

"Sometimes politicians are absolutely unaware of the true content, significance and consequences of a law. I am convinced that it is the politicians, who are influenced by some invisible groups that operate in the media, don't ask the key questions because those groups would not benefit from that, "- commented V. Radžvilas to LRT.lt.

Lithuania, according to the philosopher, has had this issue for almost three decades, "This elite feels no responsibility for the future of the nation and the state. It lives in the day with the philosophy of the sadly famous Louis XV of France saying "After me, the flood".

V. Radžvilas: a disaster has come already and we can‘t hide it

Lithuania shouldn’t turn its back on Visegrad states

Passive stance that the European Union has taken toward Brexit is bringing it ever closer to other...

The impeachment commission for Mindaugas Bastys , a member of the Lithuanian parliament's Social...