Jastramskis on Labour Code: This Government can‘t make decisions like a bulldozer 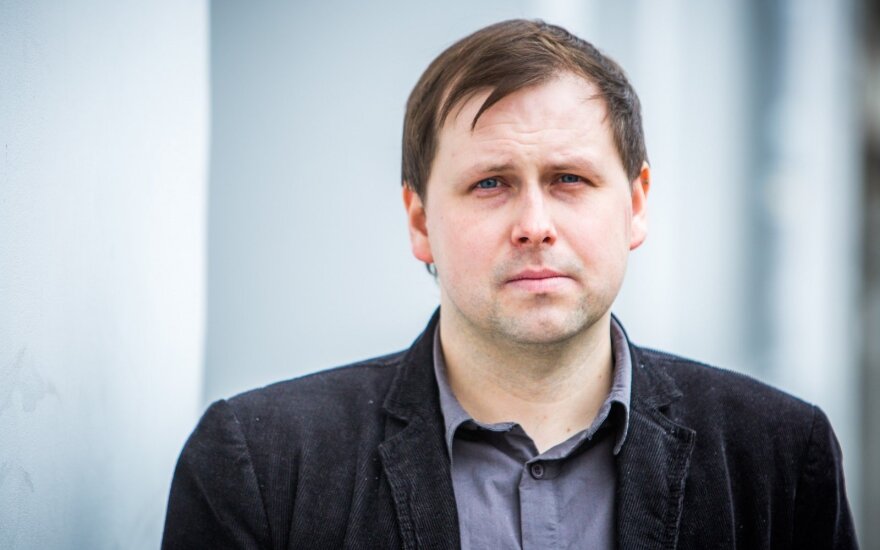 The new Labour Code may not take effect from July. Lithuanian Farmers and Greens Union (LVŽS) promises to agree with the Code if they get the support of the Tripartite Council. About all of this at the TV show "At the centre of attention" a conversation with Minister of Social Security and Labour Linas Kukuraitis, LVŽS Group deputy Virginijus Sinkevičius and political scientist Mažvydas Jastramskis, LRT.lt reported.

Related articles
Farmers are drunk on power
It‘s dropping fast: it has been worse only for the Conservatives

Mr. Jastramskis doesn't that statement sound like the Government's refusal?

M. Jastramskis: We can see that but I still would suggest to look closer. We can look at the making of democratic decisions from the majoritarian side, who's the majority, those make the decisions. However, you can look from the perspective of the consensus to include as many groups as possible, as much interest organizations, etc. The government's actions unprecedented. Tripartite Councils in different countries have different influences. An extreme case would be Austria, where in the post-war period no serious decisions in the economy has been made without the agreement of employers and unions, and Parliament in the state was in second place.

With the exception of the Parliaments Committee of Social Affairs and Labour (SRDK) new proposals, a consensus has been was found long before between the employers and the Government. And now, a decision has been delegated to trade unions, do you agree with that?

M. Jastramskis: You should ask the people working in Tripartite Council, how and who is making the decisions there. But one of the essential features of democratic consensus is that the most important groups have a veto power. I would agree that trade unions have a certain veto power.

You don't agree with the President said that the citizens voted for the Government, not for the Tripartite Council, so the Government has to make decisions?

M. Jastramskis: It's for us to realize, first, that the decision-making in democratic countries can go a different way and there is no single best path. Second, if a clear path is chosen, it we need to communicate clearly and not stray.

Mr. Kukuraitis, you're just from the Tripartite Council, the council agreed with some things, o not with the others. What's next?

L. Kukuraitis: We need to be happy with the work of the Tripartite, which they did today. Council discussed for 4 hours on 8 points. For those points, that were agreed on, the Parliament will be given new amendments for the project that now is in the Parliament. It's proposed not to consider those SRDK proposals that weren't approved by the Tripartite Council in the same project. We will offer to do that.

V. Sinkevičius: First of all, when LVŽS were going into elections, they emphasized that they will enable trade unions and strengthen their negotiating power. I find it strange that in Lithuania social dialogue is surprising. It's finally happening, we have a PM, who kept his word, what is agreed will be done. It's very important.

They're surprised not by social dialogue and but delegation of decision-making. The dialogue may be happening for some time but ultimately a decision must be made.

V. Sinkevičius: Yes, decisions will be made on those points, which have been negotiated. We are giving half of the year for the Tripartite Council to negotiate, invite employers, trade unions, and then say that no matter what you negotiated, we know better and everything is crossed out and replaced. It can't be like that. These tradition has to change. We said that the decision-making will go to the lowest level. As the unions will be able to stand for the people, if they don't participate in the negotiations, if everything is delegated to the Parliament or to the Government, which twists hands and changes decisions. I think this is a very important step forward, by demonstrating that the Tripartite Council in this country and it is important for trade union representation and empowerment of the people is very important.

Lithuanian Trade unions represent less than 10 per cent, and the others should be represented by the Government. But in this case, the decision-making institution that so poorly represents employees? Is this right, Minister?

L. Kukuraitis: Trade unions and employers, and Government representatives are in Tripartite. We don't let trade unions decide. If we don't value the tripartite dialogue, they go to the Parliament, through the committee, Parliament members, provide additional proposals and then it's unclear how the debates on the Labour Code will end. The most tension in the Parliament was during the last term when the group tried to influence members of Parliament's decisions. Now we are discussing it. When there's a consensus, the tensions are much lower. Clearly, the need to increase the number of participating in trade unions, we need to help achieve this. The Government also has plans. However, if we won't start from the Tripartite Council, how can we expect the tripartite dialogue in agreements at municipal level, etc. The Government in this case shows a clear commitment to social dialogue at the national level.

V. Sinkevičius: Trade unions have to become stronger in Lithuania, if we want to have continuous negotiations on salary raise. One of the things that we are considering is to give 1 per cent of income tax not for political parties but for trade unions.

In your opinion union represent more people than a political party?

V. Sinkevičius: Work councils are extremely important with the new Labour Code, where unions will have a place. Their daily important work will be representing people. Trade unions must become stronger and learn to negotiate. Everyone goes to negotiations with their own attitude wanting to get everything. But if someone else gets everything, then someone loses.

Mr. Jastramski, isn't the delegation of the decision not just a public relations trick, knowing that a large part of society opposs the Code, without digging deeper what's written in it?

M. Jastramskis: Most things that are done by politicians, even when making decisions are making a PR stunt. The result can happen, as strengthening of trade unions but I doubt it. The last data shows that in European Union only 8 per cent workers belong to trade unions. The previous Austria an example of a strong, influential Tripartite Council, social partnership example, where 28 per cent of people are employed. We have done a national election study and put in a question about the Code. People thinking that the new code is useful for the people of Lithuania was only about 10 per cent. Those that disapprove or support is about 67 per cent.

Any Government that has adopted the Code and took responsibility for it, will suffer negative consequences.

M. Jastramskis: Let's say it that way. Another thing, in spite of the fact that LVŽS had a very good ratings straight after the election, their real mandate, how many people voted for them in the first round of single-member and multiple-mandate. If you put this Government, it has the weakest mandate from LDDP in 1992. That's because in the first round for the Social Democratic and Farmer candidates voted only 34.4 per cent, 36 per cent in the multi-mandate. This Government can't make decisions like a bulldozer if they are trying to avoid responsibility or give it away to other institutions, from communication point of view I completely understand that.

Code will enter into force, someone won't like it. Then LVŽS says, dear unions, you were consulted.

L. Kukuraitis: Tthe Labor Code will be still discussed in the same Tripartite Council. We will continue the dialogue. Today, we agreed on the complete package on temporary employment agencies. It was also agreed that the Labour Code talk not about the license but about the Governments' established the procedure for these companies. T the size of penalties where the employer is late to pay wages was agreed on. It was agreed that the number of delayed months will not exceed 6, and the committee suggested an indefinite time period. Also, on the periods between sending to work up to five days in a row of non-payment. Yet because of the composition of the Tripartite Council, there were 15 members, there will be 21 members since the 1st of July. It's an important agreement, serious discussion were because of the composition. Finally, it was agreed on the time for employers, who work in harmful conditions.

Minister, so the Code will take effect on 1st of July?

L. Kukuraitis: I'm sure that it will go into force.

V. Sinkevičius: It will definitely. Now there are no preconditions that it wouldn't.

And if there's debate on SRDK suggestions?

V. Sinkevičius: We meet in the coalition each week, discuss on various issues and I think that all of us have the same goals, for the benefit of the state. We'll find a consensus in the Coalition.