DELFI
With the Lithuanian Peasant and Greens Union (LVŽS), its candidate for Minister of Finance Stasys Jakeliūnas spoke to Delfi on the first tasks he plans to focus on if he were to take the post. Delfi reminds that for two years (up to the end of 2014) he was PM Algirdas Butkevičius advisor for finance, but resigned, citing issues with working productively. 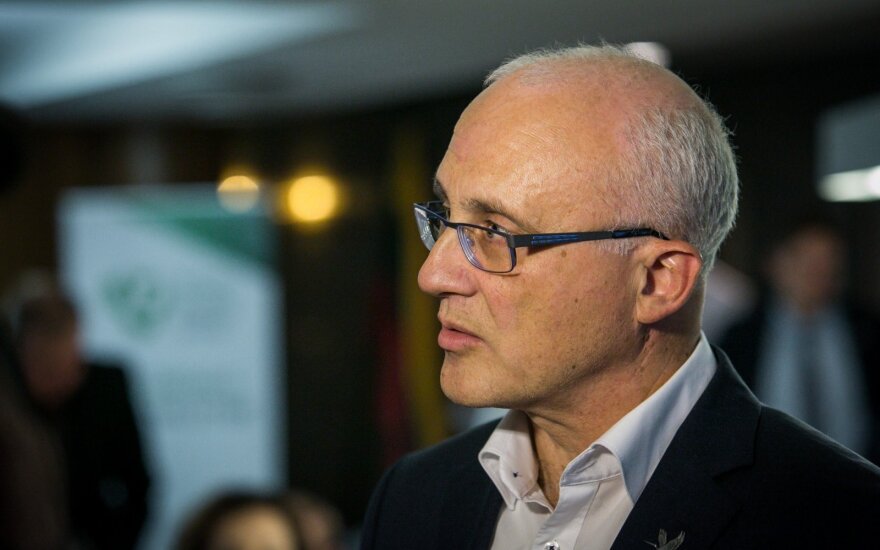 Back then he explained that his and the PM’s positions matched only regarding the euro while other major finance issues were not resolved or put off to later.

Finally opinions clashed regarding the Sodra budget. There was systematic breaching of the law – pension funds were used to both finance the state budget, paying large interest rates, and to pay pension funds. This was the last drop, which separated us,” S. Jakeliūnas explained his motivation to resign back then.

Related articles
ELECTIONS over – who will govern?
ELECTIONS. Karbauskis on what matters to the 'Peasants and Greens'

While he points out he is not yet sure whether he will definitely become Minister of Finance, since he has only been suggested as a potential candidate, with no final decision made, Jakeliūnas explains he is already planning potential tasks.

“The first task is to perform a more detailed evaluation of the budget project, consultations with State Control because it is now the institution which evaluates it, furthermore consulting the European Commission to which the project is submitted, there is also next year’s changes to the Sodra and state budget legislation, forseeing that the whole of the Sodra debt will be transferred onto the state budget.

Because of this Sodra has been unjustly been drowned and this is an old problem, several years old. Also assignations to Sodra have to be set for the financing of the pension stage two,” he explained, reminding that up to 2014 such assignations were in place.

From the first of July next year, Jakeliūnas assured, they have pledged to increase the average retirement pension by 40 euro, compared to current levels.

“Other tasks – State Control conclusions and recommendations on state investment program review and structural reform because there is much disorder there, decreasing our budgetary and overall economic reliance on EU funding. This flow will not cease right away after 2020, but it will definitely decrease 30-40%. As such we need to become far more selective on how we choose which projects to finance in order to avoid shocks later on,” he explained.

Aiming at reforming the pension system

Jakeliūnas directed much attention to the pension accumulation system and its reforms. He intends to propose to merge the second and third stage, halt direct financing from public funds, but perhaps establish targeted tax breaks.

“Currently some of the 1.2 million people who have agreements for second stage pension are unaware of what sort of risk they are taking.

Equally neither does the state because it also finances it, performs ineffectively. I am not claiming that the whole system needs to be shut down with the funds being nationalised – definitely not.
Such accusations already appeared in 2013 when I proposed to reform this system. By the way, having consulted global banking experts, we almost had a verbal contract, but Minister Algimanta Pabedinskienė refused to finance this project, which was valued at 30 thousand dollars, while financing the completely necessary social model.

These are difficult questions, much debate and negotiation will be needed, but our principal stance is that the pension system, not juts that of Sodra, but also that of the stages, has to be reformed in order to make it clear who is taking what risk and how it is financed,” explained the politician.

Changes for more than a million Lithuanians

According to Jakeliūnas, over 1.2 million Lithuanians are accumulating funds in second stage pensions, with 400 thousand also using the third stage.

“In terms of risk, these are analogous products, thus there is no reason to have them separated,” the LVŽS member was convinced, noting that there is no strong opposition to the idea in any of the other parties’ programmes.

“I imagine the financial sphere as I understand it, but whether I will be put forward as a candidate or whether I will work in Seimas – no decision has been made. One way or another, I believe I will be working with finance, budget and the oversight of the financial system,” he explained, stressing that even without a post, he would not feel slighted.

When asked whether difficulties could arise regarding potential partnership, with Ramūnas Karbauskis identifying both the Social Democrats and the Conservatives as potential partners, S. Jakeliūnas was unwilling to speculate.

“Currently I do not want to claim which option would be more favourable. I believe that it will depend on negotiations, who we will be working with. Of course R. Karbauskis said that he hopes for a grand coalition. I think that would also be good. Then we could take up essential reform, which may require changes to the Constitution. More specifically – regarding the regulation of certain financial matters, state debt and deficit. A significant majority in Seimas is needed for it,” he cautioned.
The politician was pleasantly surprised by the results of the election. Meanwhile party leader Karbauskis and frontrunner Skvernelis demonstrated confidence in potential results and a victory practically from day one, he stated.

“I thought the number of mandates would be near even with the Homeland Union – Lithuanian Christian Democrats. But what happened exceeded expectations,” Jakeliūnas admitted.