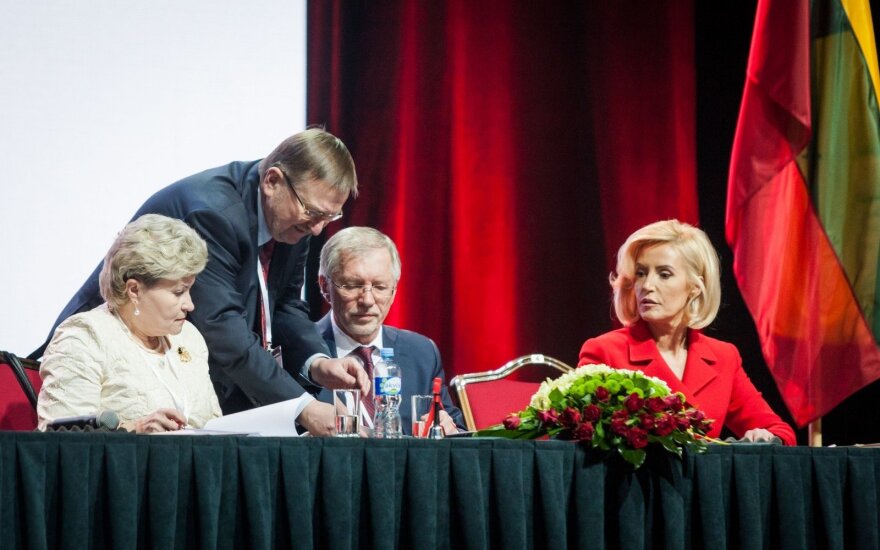 A new party has appeared in Lithuania – politicians, who broke away from the Social Democrats, together with a number of former Labour Party members have founded the united Lithuanian Social Democratic Labour (LSDD) Party. Some analysts rate the new party's prospects as poor, while party representatives describe it as a centenary gift to Lithuania and talk of the need to fill the open niche for a traditional social democrat party. According to deputy chairman Juozas Bernatonis, he would even be "ashamed" to describe Gintautas Paluckas' party Social Democrats, lrt.lt writes.

In terms of the need for a new political party in Lithuania, J. Bernatonis emphasises that Gintautas Paluckas' party declared a shift to the left, which has opened a niche for a traditional social democrat party and according to him, those desiring to represent traditional European ideology in Lithuania and continue social democratic tradition have chosen to band together.

He believes that the original Social Democratic Party, which is headed by G. Paluckas, has diverged from its programme in what it has expressed in its manifesto. "Modern social democrats did not declare class struggle, business expropriation or any such matters, which are typical to leftist radicals. I do not know, perhaps they are seeking to draw in further votes, but I believe that in a certain respect it is misleading people. It is completely unrealistic. Our society is no longer class based, labour relations have changed, the world has changed," J. Bernatonis said.

Ž. Pinskuvienė was briefly the chairwoman of the Labour Party, when asked whether it was on personal initiative that she and a number of fellow Labour Party members joined or if it was upon the invitation of J. Bernatonis or Gediminas Kirkilas, she responded that, "No doubt, with Viktor Uspaskich returning to the party, among the most active, most hard working people we decided that this party is no place for us, that we have to leave. And we chose a path because we live in free Lithuania, we are free people and can choose who we team up with. After V. Uspaskich began to open and close his chakras, we truly realised that our paths diverged and willingly left the party.

Of course, there were various thoughts, someone began to form a movement. Those people are active, they want to work for Lithuania, its people and we discussed various options. The situation with the Social Democrats developed as such and because we are all in politics, are familiar with one another, this idea was born, why can't experienced politicians unite."

The former Labour chairwoman claims that a number of parties presented invitations to join them and numerous meetings were held, with discussions on the regions and rural areas being of chief importance. Ž. Pinskuvienė explains that upon seeing the party's programme, she decided to join its creation, emphasising that the party now has almost 5 thousand members, with the founding congress featuring some 700 members. "These days we receive numerous calls from various regions where people want to join because of course the opinion was formed in the public that perhaps people won't join this party, someone will not manage to form it, gather people, but on Saturday it was clearly displayed that there are people," she said.

V. Bruveris finds Gediminas Kirkilas' claim that the party's creation is a centenary gift for Lithuania to be peculiar in the context of the party's current image. "It is clearly understood what it is – a party of political crumbs, in which you have people whose motives is very clear and understandable – they need to live somehow," the analyst said. He explains that the formerly Social Democrat members in Seimas are left hanging, needing structure, a part organisation to stand on as a foundation in order to both make the coalition appear more solid, rather than just a coalition of groups and on the other hand with eyes on next year's municipal and European Parliament elections.

The expert is left unsure as to which of the two elections is more important to what he describes as LDDP [Lithuanian Democratic Labour Party, one of the Lithuanian Social Democratic Party's precursors] nomenclature, which now chiefly comprises the LSDDP's leadership, albeit he guesses it is the EP elections. And for this, V. Bruveris points out, one needs a backing structure, a list and the party was created from those with available human and political capital.

J. Bernatonis expresses surprise at Vytautas Bruveris' claims and stresses that the latter probably did not visit the new party's congress because some half of the new party's membership has not had party affiliation before and no-one retains any distinction between the members, whether they were members of Labour or the Social Democrats. "We have our programme, our precepts and are united based on them," the politician stated. He denied that the party would seek more ministerial postings, but did suggest that there will be need for negotiations, given that this is a unique case in Lithuanian politics where a newly formed political power is immediately in the ruling coalition.

In terms of the numerous legal controversies trailing behind various figures who joined the party, while it is seeking to present a candidate to the post of justice minister, V. Bruveris recommends looking at the matter based on specific individuals. Ž. Pinskuvienė, for example, is known to have been embroiled in a vote buying scandal and V. Bruveris is left wondering, why the party's founders decided, it is worthwhile to invite her, albeit he concedes that her political capital and influence in the Širvintai region is undisputable. The case of Andrius Šedžius, according to Bruveris a controversial figure, is a more difficult matter to explain. In this respect, the analyst muses that perhaps this comes down to personal connections between Šedžius Sr. [Former Šiauliai district head Alvydas Šedžius] and J.Bernatonis together with the other former LDDP nomenclature representatives.

"Overall, knowing how our broad voter masses, regardless of specific political preferences, how they view political migrants, renegades and overall figures, who have changed their political banners numerous times during their career, knowing this, I would not predict anything good for the party," V. Bruveris diagnosed, to which Ž. Pinskuvienė retorted that the topic should be concluded and no longer escalated because the Supreme Court has ruled that vote buying did not occur and that it is not manufactured scandals that should be discussed, instead pointing out how V. Bruveris has been stopped for driving under the influence of alcohol, which according to her would be a massive scandal if it were her instead.

To this exchange, J. Bernatonis adds that, "As former minister of justice I would like to say that Mrs. Pinskuvienė was acquitted by the Supreme Court; Mr. G. Paluckas was sentenced to two years of imprisonment for corruption charges, but the media does not talk of it."

When he was reminded that this matter had been brought up in the media a number of times over the years, the politician turned to the topic of political migrants, stating that he personally has never changed parties, having always been and continuing to be in Algirdas Brazauskas' party, explaining that there is continuity from the LKP [Lithuanian Communist Party], to the LDDP, to the LSDP to now the LSDDP.

When the cases of Andrius Šedžius and Remigijus Ačas are pointed out, with A. Šedžius having been both a Social Democrat and a member of both the Lithuanian People's Party and Order and Justice, J. Bernatonis responds that it is good that a young individual is seeking his place in politics.

In his guest speech at the LSDDP congress, Prime Minister Saulius Skvernelis stated that if it were necessary to bet on which social democrat party will survive, he would vote for the LSDDP. When asked if he were willing to bet on the outcome of the upcoming elections, J. Bernatonis stated, "I believe you will see after the elections. Next year will truly be difficult. If you are talking about the European Parliament elections, they are not all that important to our people, it will be a tie -1:1." He points out that this would be a tie with "Paluckas' party" because it would be shameful to call them Social Democrats.

Meanwhile V. Bruveris believes that the new party's prospects are poor, if not hopeless. "During the European Parliament elections, Mr. Bernatonis is thinking that they will somewhat manage to consolidate the electorate and with such low activity will perhaps win something. I understand them, what else can they do. They have to participate in those elections. The European Parliament, I imagine, is the chief goal of at least a few party members. They are doing just that, even if their prospects, I believe, are poor."

The Social Democratic Labour group in the Lithuanian parliament will propose a candidate to become...

The Lithuanian Labour Party has lost more members than any other political party in the country over...