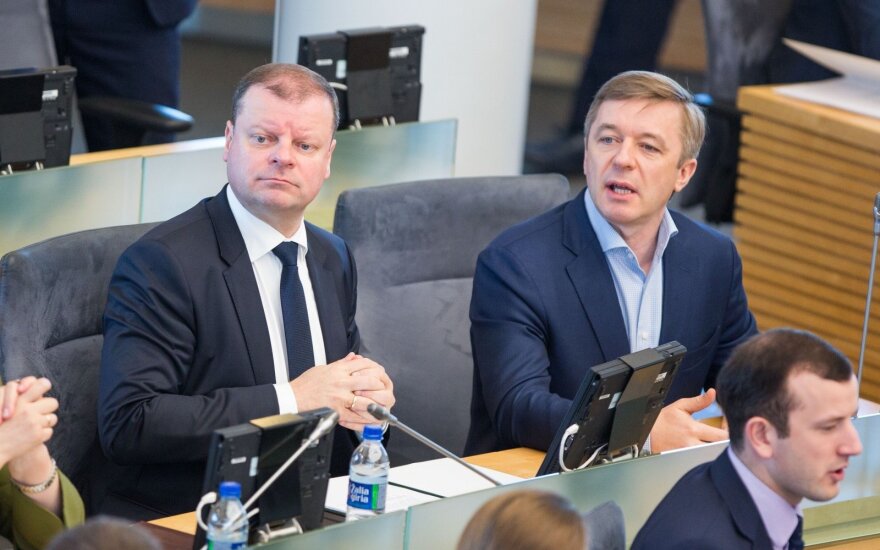 The ratings of Farmers and Greens Union are consistently decreasing: the process is much faster than for the Social Democrats, when in their last term they led the ruling coalition but the Farmer situation is much better than the Conservative during the time of Andrius Kubilius and economic crisis.

DELFI decided to compare the ratings of Conservatives, Social Democrats and Farmers Greens from the beginning the term when parties were a key link in the ruling coalition.

Homeland Union-Lithuanian Christian Democrats in 2008-2012 have formed a coalition with the Liberal Movement and the dying National Resurrection Party.

A coalition of Social Democrats and the Labour Party "Order and Justice" were in power in 2012-2016.

Farmers and Greens Union in 2016 were the ruling majority with the Social Democrats.

The public opinion and market research company „Vilmorus" data shows that in May of 2017 the rating of Farmers and Greens Union was 17.2 per cent., when taking into account only respondents that have an opinion. The recent popularity of Farmers Greens is getting noticeably lower even though the party remains the most popular in Lithuania.

The popularity of the ruling party usually decreases over time. It's a natural tendency because usually after the elections the people have a lot of expectations but the politicians aren't able to respond to them. However, the Farmers Greens are going down quickly.

Immediately after the Parliamentary elections the Farmers were more popular than the Social Democrats during their last term but now the situation is getting worse.

"Vilmorous" director and a sociologist Vladas Gaidys states that the ratings of Farmers Greens are falling because of several factors.

"Every month they bring more uproar from the other side. At the beginning of the Greta Kildišienė left the Parliament: the party was loud about it, G. Kildišienė, and the leader of the party as well. I think that the Labour Code added to it. Maybe the Labour Code is good but it's image is bad. If the PM would have given at least 15 minutes on TV for a statement for Lithuanian people, if he would have explained what flexible labour relations mean, then maybe things would be different. The Labour Code affected the Social Democrats during elections too" said the sociologist.

„Second thing is the heating exemptions. Perhaps it will be forgotten in the future but the survey coincided with discussions on the exemptions. It's not a popular thing. If food prices can be adjusted, to buy other products, go to another store, you can't do anything with heating, the person is helpless. Some are unhappy because their exemption will be stopped, others are unhappy that they have to apply for certificates to get assistance" said V. Gaidys.

As is known, the ruling refuse to offer value-added tax (VAT) exemptions for heating and hot water. The standard rate currently is at 21 per cent, with exemption - 9 per cent.

The third aspect, which is harmful to Farmers, is the debate on alcohol control. According to the sociologist, the general public supports the restrictions on alcohol and it was one of the reasons that helped the Farmers and Greens Union to win the elections. However, some find it acceptable, while others – don't.

"For example, they agree with restrictions of time and ban on advertising. The increase of prices is not acceptable" said V. Gaidys.

Surveys show that people do not like their plans to shorten the school holidays as well.

Despite the decline in popularity, Farmers and Greens Union remains the most popular party, Prime Minister Saulius Skvernelis is also still popular, Aurelijus Veryga, who is the Minister of Health, is also seen more positively than negatively.

The popularity of Social Democrats in 2012-2016 decreased very little at the beginning of the term, much less than it is now for the Farmers.

For instance, in May of 2013 the ratings of Social Democrats were 29,3 per cent, when looking only at respondents that have an opinion.

V. Gaidys said that the Social Democratic Prime Minister had a careful policy: all problems have been accompanied by statements that the current situation is being analysed or that they will be creating a work group that would make proposals.

"As I remember that time, the Social Democratic Government was liked by people because they didn't rush, they were cautious but that after a few years they became timid and inactive. But from the start, all issues had been addressed, to set up a commission for a discussion, to think. Everything was done carefully. The so-called "night reform" left such an impression that everything that was done the opposite was evaluated. The MP was also simple and not arrogant. Only later everything shifted into a caricature but that was the beginning" says V. Gaidys.

„Night Reform" is the 2008-2012 Conservative instruments that cut costs, benefits and wages in the public sector.

The respondent also remembered that in 2013 Lithuania had more or less overcome the economic crisis and public expectations and hopes were growing. This could have led to the steadiness of the ratings of Social Democrats.

But the opinion was of the ruling coalition was led by Homeland Union-Lithuanian Christian Democrats. In May of 2009 their rating was just 13.4 per cent, when only respondents with an opinion were taken into account. Of course, we have to remember that in that those years in Lithuania in general were very difficult: economic crisis was raging, the Government was cutting pensions, public sector wages and benefits, the country's GDP fell in record numbers and a riot near the Parliament happened on January of the same year.