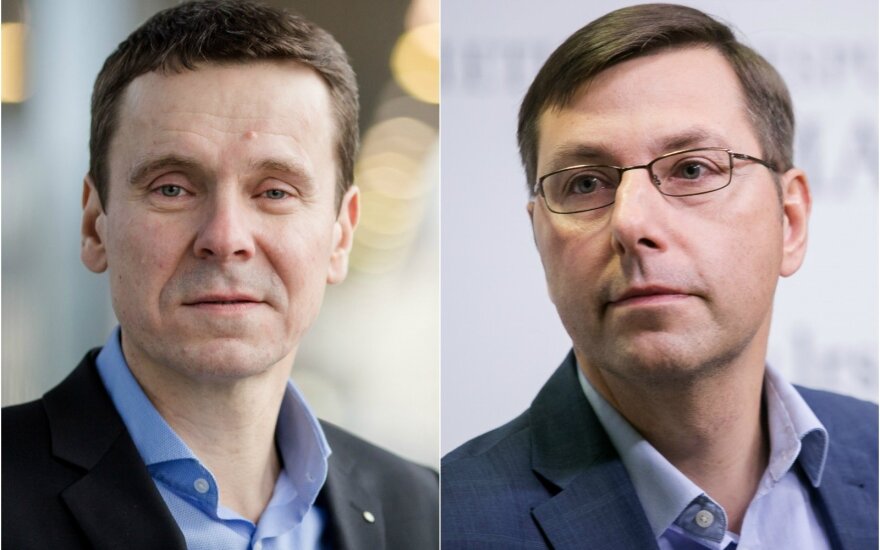 Evaldas Pašilis Attorney General applied to the Parliament for annulment of the Liberal Movement parliamentary group member Gintaras Steponavičius legal immunity. However, it is clear now what exactly what the politician agree on with MG Baltic Board Member and MG Baltic Media president Raimondas Kurlianskas. The latter has the status of a suspect in the case.

In the prosecutors’ request it says that in October 29th of 2015in Gediminas Avenue café "Esse" he met with Mr Kurlianskas and agreed that the Group companies will transfer the funds to public office, "Freedom Studies Center and Gintaras Steponavičius support fund.

“Freedom Studies Centre” and Gintaras Steponavičius support fund registration addresses are one and the same - in Vilnius, Jonažolių Street.

According to the report, it was agreed that the company will transfer the funds to public office and the support fund and thus illegally finance the Liberal movement.

For the resolution, this was related to the reconstruction of that funding, 100 members of the Parliament voted. 67 MPs voted in favour, 13 were against and 20 abstained Among the latter was the Liberal Movement 7 members, 2 were against and 1 - for. G. Steponavičius was among the abstentions.

After the New Year's G. Steponavičius again met with Mr Kurlianskas at the restaurant “Terrazza”. It was the year 2016, January 11th. During the meeting, they discussed the illegal funding of the Liberal Movement and in the details they agreed that the MG Baltic companies' will give 10 thousand for “Freedom study centre” , for the support fund – 5000 euros.

And he did so. According to the Attorney General's document that was submitted to the Parliament, R. Kurlianskis on the 2nd of February ordered the MG Baltic Media to transfer money into two accounts: "Freedom Studies Centre”- 10 thousand Euros, support fund - 5 thousand Euros.
"After R. Kurlianskas did this, G. Steponavičius got other personal and property benefits – one of the activities, of which he was a leader in political parties, "the Lithuanian Liberal Movement, was illegally financed ", - the report said.

How much money the fund has received in support?

By the way, G. Steponavičius himself publicized how much donations his support fund has attracted from the MG Baltic affiliates.

MG Baltic donated to G. Steponavičius Support Fund and in some years it accounted for a significant portion of the total funds that were received, next year the concern did not support the fund or sparsely supported it.

In the data submitted by the fund to DELFI in May of last year, in 2016 MG Baltic Media donated 5,00 Euros to S. Steponavičiaus fund.

2015 – donations from the Concern did not appear. 2014- a secondary MG Baltic company Mitnija gave 20 thousand LTL (Lithuanian Litas). At that time, the euro has not yet been introduced in Lithuania.

In total, according to the fund data provided, through during the existance of the MG Baltic companies, in addition to the sum refunded to “Mitnija”, G. Steponavičiaus Support Fund received more than 117 thousand LTL or more than 33 thousand Euros.

How much money did Freedom Studies Centre receive?

At the request of DELFI, “Freedom Studies Centre” also provided information about the support received from the MG Baltic Group companies.

2013- MG Baltic Media Centre allocated 14 481. These amounts are odd, as translated from the Litas to the Euro. As is known, the euro was introduced in Lithuania in the beginning of 2015.
The total assistance from 2013 to 2016 is accounted for more than 30 thousand Euros.

G. Steponavičius recognizes that there was a meeting with the concern MG Baltic vice-president R. Kurlianskas, and requested the support for the Fund and one public institution, but, according to him, it was a clear and legal activity.

"The prosecutor appealed for my immunity related to the potential abuse of office and this appeal has no connection with the possible bribery or corruption. Basically it comes to the support of two bodies, a Fund in my name, a public institution, and I can once again be very calmly with my head held high to say that legitimately received support from MG Baltic companies was used for these organizations has been used for the meaningful public funding of projects and not related to hidden party financing ", - said the liberal.

G. Steponavičius also stated that by participating in the events of these organizations for civil society, he did not benefit as a candidate during the Parliamentary elections because during the campaign he did not take part in such projects. "The Parliament election campaign in such projects has been carried out, neither the funds nor other organizations have been implemented, where I'd be involved in or related to," - said the liberal.

According to the General Prosecutor's Office, MG Baltic donations, part of the funds were transferred to the related party fund and public institutions accounts, which were used to pay debts for the political parties and the Parliament member's activities publicity events, the other part was devoted to the candidate-year term 2016-2020 Lithuania Parliament activities of publicity, G. Steponavičius denies it.

"It is true, completely untrue, I do not agree with this," - said the liberal.

He said that he is asking to revoke his immunity in order as soon as possible so he could defend himself by legal means.

"My motives are not to hide behind the immunity, to make decisions as soon as possible, and I hope that next week, the procedure can be completed," - said the politician.