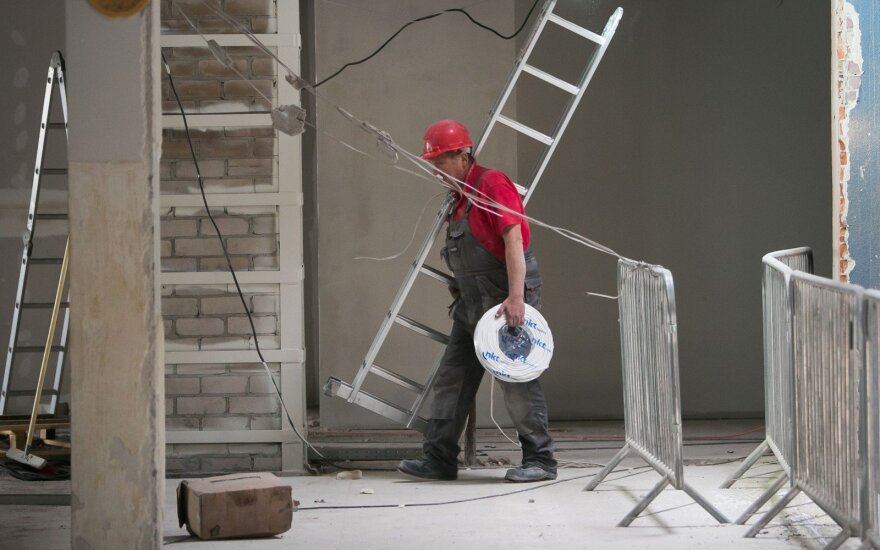 In recent days the words of "Farmer" leader Ramūnas Karbauskis have received much attention with him commenting about a potential new economic crisis. The politician claimed his statement was based on economist forecasts. BNS interviewed six economics experts and businessmen, whether they believe the world and Lithuania are threatened with a new economic crisis any time soon.

"Economists always await a crisis, such is our work, we continue monitoring various parameters. The halt in the Federal Reserve System's (FED) expansive monetary policy is a cause of concern, meanwhile the European Central Bank (ECB) is printing money in large quantities every week. Continuing to look at surface symptoms one has to admit they unfortunately exist. For example debt between companies is rising, payments are delayed, companies are failing to make payments. Furthermore logistics is the first sector to feel the reduction in procurement, sales are halting, these are complaints from companies. Also it would be good to check the companies' savings in banks, the reduction of which could mean failed payments.

On a global scale, the USA looks ok, but China – not too well. People and companies have learnt the lessons of the last crisis, but the public sector has not learnt them – full recovery from the previous crisis occurred in 2013, but it is now 2017 and we still don't have a reserve, the budget is climbing to ever greater deficits, we are now only concerned with pensions, as was being done prior to the last crisis.

Perhaps the new crisis won't be as deep or painful because our integration is more West-bound. But even in the West, the processes are worrying – instability in South European countries, their question remains unresolved. A long and lasting period of economic growth has no real foundation, everything is based on the inflation of monetary policy."

"Looking at the major world economies we can see that we are currently in a cycle of economic recovery. Of course the US comes first, where the FED is already raising the base interest rates because unemployment is low and inflation is a little under the wanted levels. In Europe for now we still have a phase of the cycle where interest rates remains negative and the ECB is unwilling to raise the base interest rates because it does not view current economic recovery as stable. In my opinion we are in a recovery phase for the Eurozone, where it is more likely to be very few threats. We will have fairly quick economic growth in the Eurozone this and next year. Lithuania is very dependent on external markets and particularly on the Eurozone. If we make the assumption that the Eurozone is to grow 2%, then there can be no real talk of crisis in our country.

Of course threats always exist. Oil prices are on the decline again. We can recall how a few years ago when oil prices were falling under USD 40, then countries that depend on oil had problems and this influenced global sentiments.

There have been talks of the threat of China for many years, that there is a black hole there, but so far they have been coping. The USA was a global player and greatly involved with all continents, thus that crisis (2008 financial crisis) had a massive influence on the world. The role of China in the world is rising, but its capacity to hide problems in its black box and information not reaching the Western world shows that the problems are being managed. In the long term with China's power growing, its problems will increasingly influence the world.

"If anyone could predict a crisis to the day, they should be given a Nobel prize in economics for having such a method. But if we look at the perspective of several years, then certain negative events are likely. If you talk with any financial analyst, my colleagues at ISM, everyone shrugs when talking of how long the stock market euphoria will linger. Stocks have been on the rise for some seven years regardless of political shocks like Brexit. Not all sectors' economic data is strong. This increase was first motivated by the US and later the European Central Bank's monetary policy, when large quantities of money were printed.

I spoke with my banker to discuss where to invest because interest rates were low. We considered stocks as an alternative. The banker pointed out wisely that after this many years of rising, there will be a 20-30% correction. Financial market euphoria cannot last this long.

Of course these are financial markets, not real economy. Due to the economic crisis it is currently far more difficult to summarise or identify when it will hit. One of the possible scenarios, if the USA and the EU decide that the crisis is beaten and quantitative easing methods can be ended will be a raise in interest rates in their economies, so the mass of money, which flooded developing economies during quantitative easing in search of better returns, would return to the USA and Europe because returns will improve here. This could lead to an explosion of bubbles in those developing economies – bubbles that appeared due to easy credits from the West. If they all explode at the same time, we would have a similar crisis to that of the 1998 Southeast Asian and Russian, as well as global financial crisis. The Chair of the Board of Governors of the Federal Reserve System Janet Yellen managed to marginally increase interest rates and not cause a chain explosion of bubbles.

In short, financial market correction is very likely in the near future, while an economic crisis is harder to predict."

"We are among the first to feel the signs of a beginning and ending crisis. For now there have been no signs related with crisis. Container loading is one of the clear indicators of the economic situation and consumption, but there have yet to be any tangible signals that a crisis is nearing.

Of course there are all sort of signs, perhaps a sort of concern due to Brexit and other things, but I definitely cannot say that we can see a looming crisis.

No crisis passes without lessons – we carefully evaluate perspectives in investing and expanding our load capacity, we try to clearly identify what would happen if a crisis would appear. We strive to diversify our spectrum of services so that we could face a crisis prepared.

But so far we do not see any gathering dark clouds – the ships are sailing, the loads are rising and we cannot say that we are very concerned over the talks about a looming crisis."

"There are no clear indications of it, it is not the same situation as we had prior to the 2008-2009 crisis. Economists are always inclined to seek out flaws because it is necessary to improve the functioning of the economy. After said crisis, things are getting better, but slower than expected. Based on current World Bank and IMF forecasts currently a rise is evident.

There are no more tangible indications to speak of, in my opinion it is not the case that we are experiencing a better time now, but will suddenly be struck.

From Mr. R. Karbauskis' statement, prediction it is clear that it is a tactical move, attempting to enact greater domestic economic reforms. They can see certain ambiguities and dangers thus are aiming to gather a certain reserve by reducing state expenses so that they could cover the expenses caused by certain changes, particularly in social policy. Taxes are not being raised, but expenses are increasing, thus they need some sort of reserve and they explain this reserve as compensating for a future crisis."

"There have definitely been no signs of crisis lately. Quite the contrary, most factors indicate a recovering Lithuanian economy and faster growth, in recent days overall macroeconomic metrics are growing rapidly. We also see increasing industrial production, rising export, so there's no basis to see signs of crisis.

We also see record levels of equipment usage. Companies can still somewhat expand their production and export capacities, but in the future this will require further investment. This investment can enliven the country's economy because the companies will create products of greater added value. Furthermore the newest industrialist surveys show that all industrial sectors remain in an optimistic mood, expecting growth, rising exports and we have not had any comments about signs of a looming crisis."

EU leaders on Friday asked the European Commission to examine the possibility of screening...

Nausėda and Minister of Economy propose how to save the regions