Invisible Karbauskis: is he loosing leadership or does he not want to be only a „press representative“? 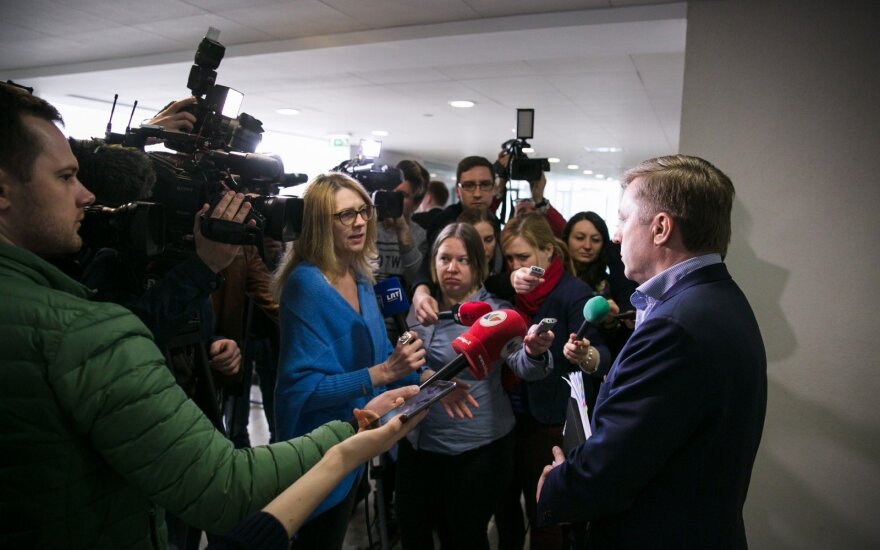 The „Farmer“ Ramūnas Karbauskis had an image of a knowledgeable and decision-making leader when he participated in the Parliament elections. However, political scientists Lauras Bielinis and Rima Urbonaitė noticed that after numerous setbacks after the election, his image began to fade. They are warning that if R. Karbauskis is not going to take on leadership, it might be hard for him to climb the political ladder in the future.

Lithuanian Farmers and Greens Union (LVŽS) won the majority with an impressive difference. R. Karbauskis has managed to bring more than 50 Parliament members to the Parliament with him. Moreover, last spring he lured in the current Prime Minister (PM), who is one of the most desirable political personalities.

Before the elections, R. Karbauskis was often cited by the media and he had an opinion on nearly every issue. He also received a lot of attention in the Parliament during the debates on the Artificial insemination law. However, what received the most attention was the scandal regarding the former LVŽS group member Greta Kildišienė. After which, R. Karbauskis became silent and G. Kildišienė gave up her place in the Parliament.

Later he faced several public relations failures that happened one after another and information about his possible conflicts with S. Skvernelis appeared in the media.

Now the position of R. Karbauskis is not as clear as it used to be. Is it a line of failures or did R. Karbauskis just “ask” for a time out and is waiting for the next mistake of S. Skvernelis when the voice of R. Karbauskis could be loud an important?

The story of G. Kildišienė and S. Skvernelis took its toll

R. Urbonaitė, who is a political scientist and a professor at Mykolas Riomeris University said that despite the fact that R. Karbauskis is a politician that is not new to the life in the Parliament, the story of G. Kildišienė acted as a cold shower.

“The story of G. Kildišienė left a deep mark. R. Karbauskis made some vital mistakes and did not handle communication well. This leads to a conclusion that he is just lying, which is a hit to the politicians’ image. We are used to politicians lying but he came in with a clear image. We then saw that the image does not match reality and some questions remain unanswered” the political scientist commented to the LRT.lt.

R. Urbonaitė states that the R. Karauskis, who was a good strategist an speaker during the election campaign, disappeared, and a remained a shadow of himself after the elections. “It is unusual, but sometimes it is difficult for him to keep a train of thought and some of his decisions lack clear logic. Sometimes, his face sows confusion or the lack of ideas on what to say. It is natural then that a person tends to avoid the media.”

According to the political scientist, after the elections, numerous ideas were given, but later they retreated. “When the idea is not complete and there is a lack of analysis in regards to some questions, then it is clear that you are going to fall […] I think, that R. Karbauskis right now does not have an effective model for communication. A clear communication is only possible when there is a clear content. However, there is none now. This is a feature for both R. Karbauskis and S. Skvernelis” added R. Urbonaitė.

According to her, it is clear that it is not as clear as R. Karbauskis has thought. “He is forced to take a one minute break but it is also not thought out well. He needs to think about his actions and communication. However, every appearance in the media shows that his homework has not been done. It appears that there was a lack of real preparation to work” – she said to LRT.lt.
R. Urbonaitė states that the friction with PM S. Skvernelis comes after the fading of R. Karbauskis image.

“We often see different opinions between the PM and R. Karbauskis. It is weird to see a two people rule but it is not clear whether they have any communication to match their positions. The friction between them is what is weakening R. Karbauksis position in the party” – spoke R. Urbonaitė.

What would help strengthen the position of R. Karbauskis

Political scientist L. Bielinis says that people often experience shock, become reserved and refuse to talk after experiencing failure. “In this case, his reaction is the right one as it is better to say nothing then talk nonsense” – said L. Bielinis.

According to him, R. Karbauskis entered Parliament elections with an image of a knowledgeable and decision-making leader. However, after numerous failures, his image began to fade. “If he stays silent for even longer, it may be hard for him to come back because ewe might forget him” – warned L. Bielinis.

How is he supposed to do that? According to L. Bielinis, he need a careful preparation and strategy. On the other hand, he will face an even bigger failure.

In this case, it is better for him to prepare for the next step: decide about his place, realize his failures. We see that they are complex ones. It is not only an issue of his personal rhetoric, but also an issue of the coalition, the question of a coalition may be reconsidered after the election of a new leader. Also, the position is very active and they have strong criticism for the ruling ones. S. Skvernelis opposition only add to that even though it is not clearly stated, it is a real opposition for the leader. All of that is a insecurity that needs to be handled’ said L. Bielinis.

However, Arijus Katauskas, who is the main partner and communication expert in the company “Nova media”, stated that the communication between R. Karbauskis and S. Skvernelis has some balance now.

“There was a time when there was no information form the Government. For example, when they were preparing a plan for instruments. Now there is an increased flow of information. If we talk about topics that dominate in the Parliament, R. Karbauskis is visible, but the flow of information has decreased and things have balanced out. Because of this, it appears that R. Karbauskis has calmed down considerably. Out of principle, his rhetoric has changed and his statements are more restrained. It seems that he has learned his lesson but we can still see some bold actions” – A. Katauskas commented to LRT.lt.

According to the public relations expert, maybe R. Karbauskis decided to be a leader of LVŽS group and not their public relations representative, as he was before. “Earlier he would comment on every question. In my opinion, a leader of the group should not behave like this because they have internal resources that can ensure the flow of communication. Maybe the media is fed up with him as well’ – A. Katauskas mentioned the reasons for the decrease of A. Karbauskis rhetoric.

When LRT.lt asked A. Katauskas whether R. Karbauskas is still a prominent leader in LVŽS group and whether he has the strongest voice, he said: “It is difficult to say. We can see that his voice is important. We have not seen prominent arguments in the media. There were some on the topic of embryos. There were some signs of a rebellion, but it does not mean that he is not a leader if his visibility in the public as decreased.”

After rejecting Paluckas, PM Skvernelis found some time for Landsbergis

Skvernelis thinking about a “rainbow”?