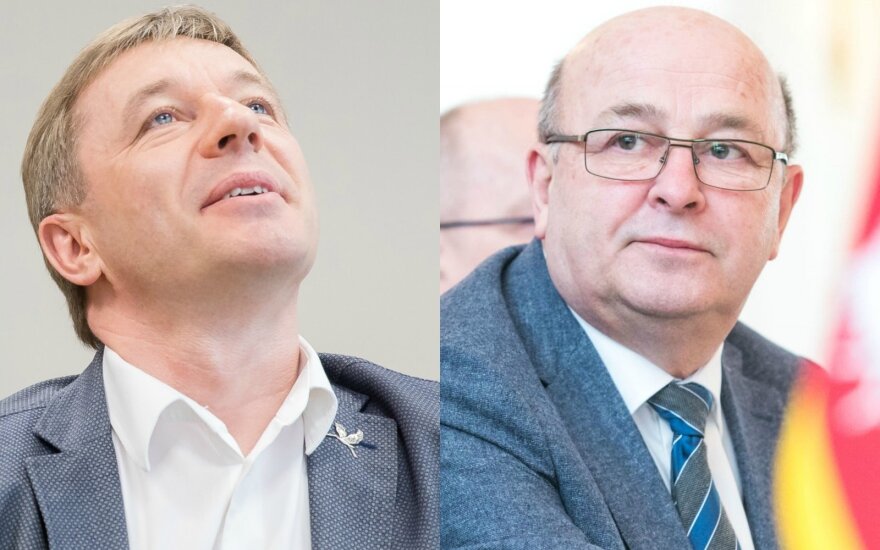 After an informal meeting, Kaunas Mayor Visvaldas Matijošaitis and Lithuanian Farmer and Greens Union (LVŽS) chairman Ramūnas Karbauskis assured they simply spoke of "farming and bees". According to Delfi sources, this discussion also touched upon the topic of the presidential elections.

"No, we did not discuss such topics [about the presidential elections]. We only spoke about the real, tangible life of Kaunas. About the reconstruction of the S. Darius and Girėnas Stadium, the Science Island, about the competition for the Concert Hall. About life. About farming and bees," V. Matijošaitis explained after Delfi inquired about the Monday meeting with R. Karbauskis.

The meeting between the LVŽS leader and the Kaunas mayor, who leads the movement Vieningas Kaunas [United Kaunas] which won the municipal council elections in Kaunas, was held at the recently opened LVŽS Seimas group office in Kaunas. Other than these politicians, Seimas Speaker Viktoras Pranckietis, "Farmers" elected in Kaunas, as well as Kaunas vice Mayor Povilas Mačiulis and Vieningas Kaunas director Andrius Palionis participated in the meeting.

When inquired under whose initiative the discussion was held, V. Matijošaitis explained that it was arranged already last week. "They have set up in our premises, decorated really nicely. We stop by often. They [the Seimas LVŽS representatives] said that on Monday they will begin work specifically from here, this is why we agreed already last week that we would come and talk. It's closer here than going to Vilnius," the mayor explained.

Nevertheless Delfi sources claim that the politicians' discussion did not avoid the topic of the presidential elections. The Election of the president, as of municipal councils will be held in 2019.

It is believed that for the upcoming presidential elections the LVŽS is currently considering the candidacy of its delegated Prime Minister Saulius Skvernelis. V. Matijošaitis would aparently also be willing to compete for the highest state office.

"Among other things, talks between the politicians could have also revolved around how to make better use of the situation. It could be that V. Matijošaitis would withdraw from the presidential race at some stage. Considering the current situation it could be favourable to S. Skvernelis. Perhaps V. Matijošaitis would later have thoughts about the post of prime minister," a Delfi contact who was unwilling to be identified said.

As V. Matijošaitis' representatives informed Delfi later, the topic of the presidential race was not touched upon in the meeting.

"From start to finish the meeting featured almost 30 people and they can all confirm that there was not a single word said about the presidential elections (or similar matters)," Kaunas mayor's advisor for public relations Tomas Grigalevičius specified.

As a Spinter Tyrimai survey performed on commission from Delfi on October 20-26, the Lithuanian people would like to see three people in the post of president – Prime Minister S. Skvernelis, Kaunas Mayor V. Matijošaitis or economist Gitanas Nausėda. Analysts who evaluated the survey results observed a clear public split – S. Skvernelis is seen as the candidate of "common people", while G. Nausėda is preferred by the elite.

When the Lrt.lt portal inquired in late October, which of the three presidential candidates in the survey have the most similar world view to his own – V. Matijošaitis, G. Nausėda or Vygaudas Ušackas, who also comes up in the surveys, R. Karbauskis then explained that, "Our candidate's position is the closest to us. He or she will win those elections. As for the three [mentioned candidates], probably V. Matijošaitis' position is the closest. Based on attitudes toward management and not foreign policy because I have not heard such things [about foreign policy] from him."

When asked by Delfi whether discussions were held with V. Matijošaitis over political cooperation, R. Karbauskis denied it.

"No, there were no such talks. I have answered the question that no-one is forming any party construct. I have already been asked how to view the fact that our party Kaunas branch chairwoman is also a member of Vieningas Kaunas. I said that she is not banned from participating in a civic organisation by any legislation. She is in that organisation, but this does not inherently mean cooperation or anything else. We all work toward the betterment of Kaunas and Lithuania," he assured.

LVŽS and Vieningas Kaunas cooperation has been observed already since the 2016 Seimas elections. Two Vieningas Kaunas representatives were featured in the LVŽS electoral roll – Aušra Paspirtienė and Gediminas Vasiliauskas. Another two representatives of this civic committee unsuccessfully pursued Seimas mandates together with the Lithuanian Social Democrat Party.

When asked about the Monday meeting, R. Karbauskis told Delfi that during it discussions were held on projects planned in Kaunas and potential state support.

"We are glad that the projects are ongoing. Kaunas would appear to leave Vilnius behind if it implements all the projects Vilnius dreams of. It was simply a friendly talk about matters important to the state and Kaunas. An informal discussion," the LVŽS leader stressed.

According to him if all governments cooperated with municipalities "as well as in Kaunas", far more work would be successfully done.

"After all very often political confrontations occur depending on who belongs to what party. With prior governments it would happen that if you belong to the wrong party, you will not receive funding for projects or such. We do not do this and Kaunas could be an example of firm and good cooperation," R. Karbauskis said.

In search of the new president: elite and common people’s choices surfacing